The recent spell of sunshine has had a dramatic effect on the garden plants with many flowers opening much early than expected. 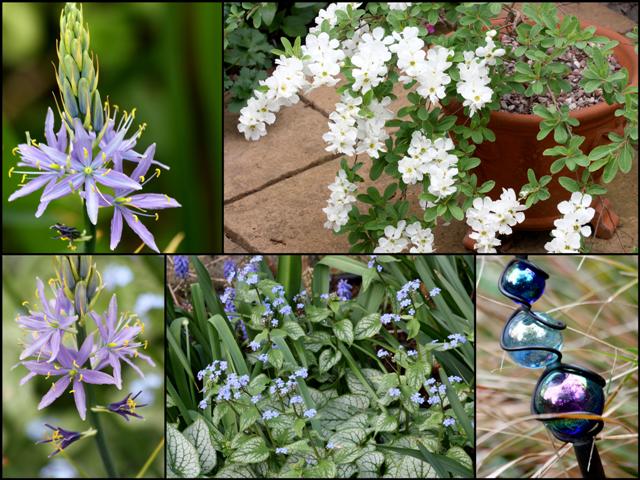 In the main border (quite small in actual fact) Brunnera 'Jack Frost' continues to send up its dainty blue heads above the mass of architectural leaves and the Cammasia's have just started to open their blue stars while in a pot on the patio a rescued Exochorda 'The Bride' is performing the best I have ever seen it. 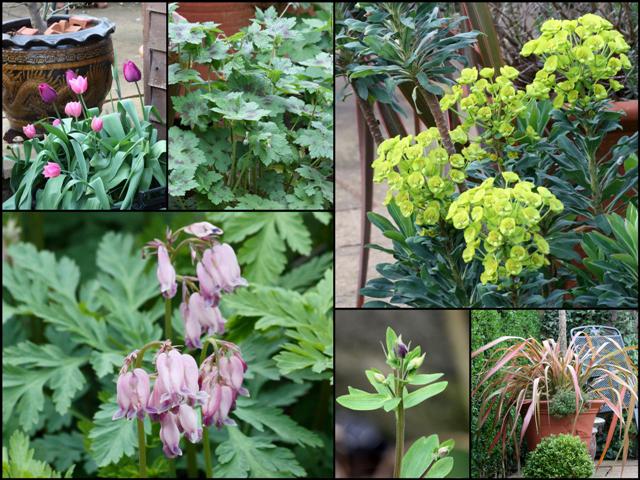 Large hybrid Tulips have produced some colour but I guess, as is typical when kept in pots, the performance tends to drop of each year. The 'Dusky Cranesbill' (Geranium phaeum) spreads itself freely around the garden so we should get a good succession of their small dark flowers; Euphorbia wulfenii providing contrast between the acid green bracts and the grey-green leaves; in the shade behind the shed there is a mass of pale-pink bleeding hearts (Dicentra 'Stuart Boothman') erupting above the finely divided grey-green foliage; the first Columbine (Aquilegia 'William Guiness) will soon be showing off its two-tone bloom and I have noticed numerous seedlings everywhere! 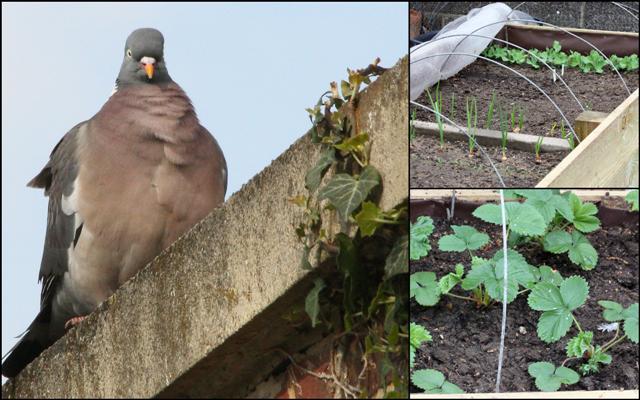 While I inspect the progress of fruit and veg (Strawberries, Carrots, Onions and Peas) in the new raised beds a local Pigeon wonders how it might gain access to this fresh greenery! Thank goodness it is all inside a well netted fruit cage.
Blue Tit Nesting Update:  I have noticed that there have been a few searches on the blog recently regarding nesting and in particular querying "why have my birds built a nest and appeared to have disappeared?".
I believe our pair of Blue Tits completed the nest building about 9 days ago and since then activity at the nest box has been very sporadic. All species need to time their breeding to coincide with the relevant food source ... in the case of the Blue Tit this means insects and juicy caterpillars. If the eggs are laid too early then there is always the likelihood of failure either at the egg or nestling stage. I did see the male and female hidden in the Hawthorn today and Mrs.was fluttering her wings in the typical courtship display or possibly begging for food and a little later one of them entered the box for around 20 minutes. So.providing the conditions are right I expect she will start laying towards the end of this month. I'll keep you posted.    FAB.
Posted by FAB at 01:26