A Day with Friends.

Today we met up with Tony and Jean early this morning for a stroll around Bookham Common. Initially the most prominent songsters as we wandered through the wooded areas were numerous male Blackcaps while we also spied nesting Jackdaw and Song Thrush plus Mallard on the pond. The most prolific wild flower was Ramsons plus one of the largest bracket fungi (Pycnoporus sp.) I have seen in a while at the base of a very old mossy tree stump.. 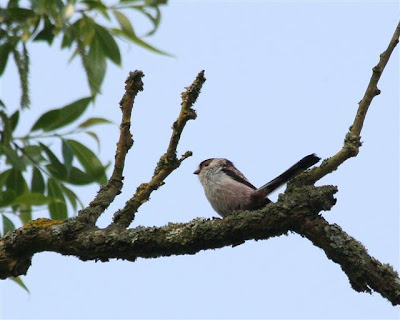 Out onto 'The Plains' we spotted a pair of Bullfinch, the male looked just like a bright red ball hidden in the shrubbery while overhead a few Long-tailed Tits flitted silently through the branches. A Great Spotted Woodpecker tried to be inconspicuous as it perched in a tangle of Blackthorn.
A distant calling Cuckoo was heard as we listened to Song Thrush, Chiffchaff, lots of Common Whitethroats and then picked up our first Nightingale singing strongly from within its dense nesting territory. A little later on at 'Nightingale Corner ( see the sign someone had scratched on a log slice in the top collage) we heard our second Nightingale although somewhat less vocal than the first. Jay, Wren, Blackbird, Mistle Thrush, Grey Heron, Blue and Great Tits and a single Willow Warbler were also logged. 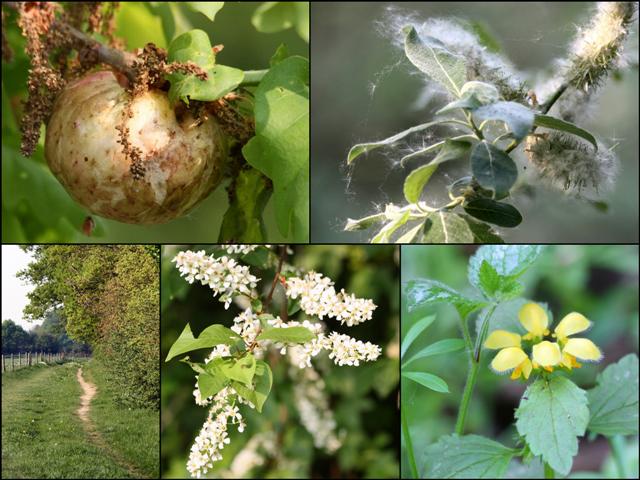 After a relaxing alfresco light lunch in our friend's garden we took a mid afternoon stroll around their local fields. Unfortunately very little bird life but plenty of other things to admire. A very large Oak Gall, seed from Goat Willow being dispersed by the very welcome afternoon breeze, bird cherry blossom in the hedgerow and Yellow archangel flowering a bit earlier than usual. Quite a few flutters rapidly flew past us including the following: 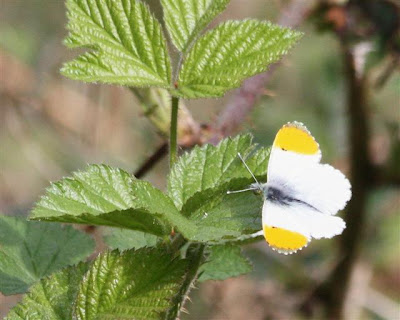 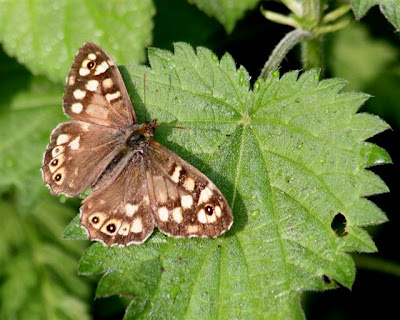 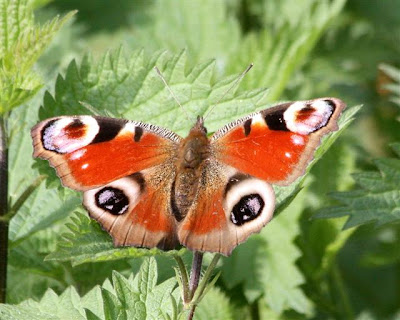 Peacock.
Tomorrow we are heading south-eastwards into Kent to meet up with some other friends so I guess I had better turn in a little earlier than usual and remember to set the alarm!   FAB.
Posted by FAB at 22:47