As is often the case the first bird I usually encounter during my local patch walks at Epsom Common is the 'Bottle' Tit. It rarely perches in one place for long so it always pays to have the camera ready .... how many times have I missed a decent shot because I haven't immediately taken the gear out of the bag! 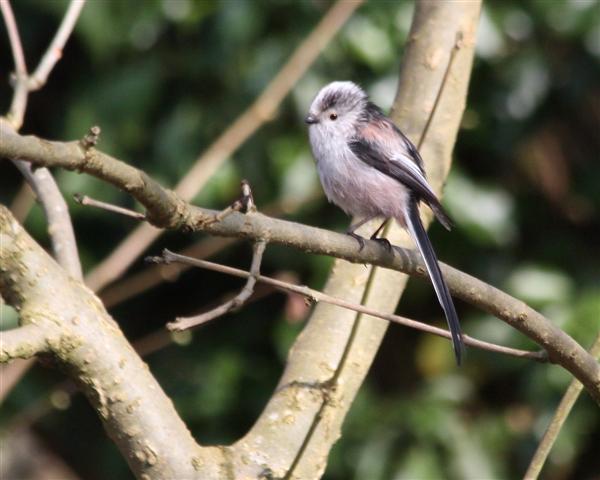 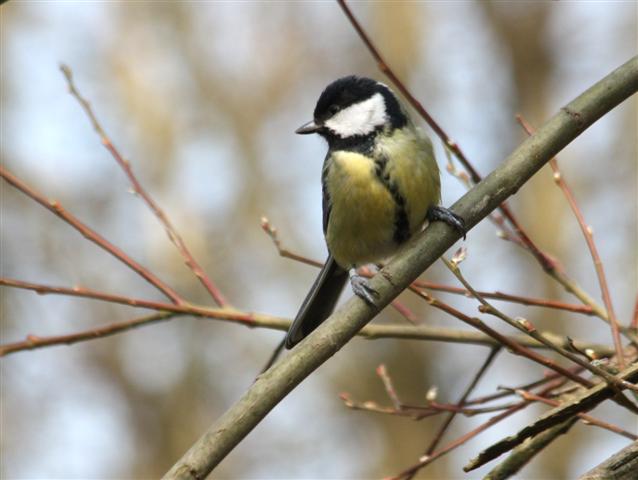 
.... AND it wasn't long before I located a Chiffchaff who had just returned from its southern wintering home in Africa although, of course, many now overwinter in the south of England and southern Europe. This individual was constantly moving from perch to perch high in the canopy while calling out its name (most field guides describe its forceful monosyllabic song as 'silt sult sult sult silt silt sult sult sult silt etc') with frequent pauses when it reverted to its softly whistled 'hweet' call. 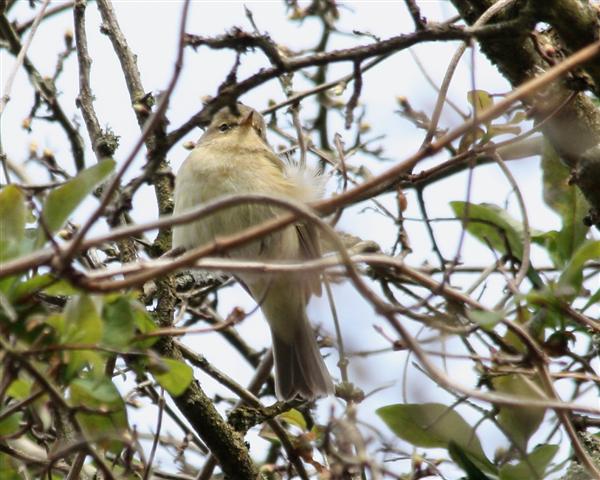 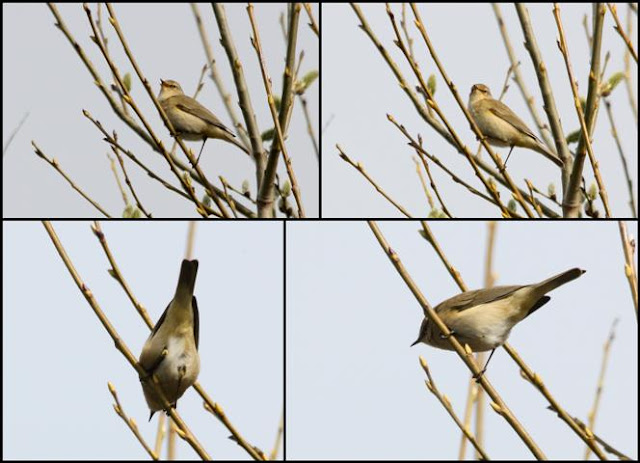 A little later I caught up with another singing Chiffy in a more open location ..... but he didn't always want to show me his best profile. I'm sure Dave (Birds from Behind) will appreciate the bottom two shots!


During my early years of birding my mentors would often remind me to listen out for the scolding calls of Corvids when walking through woodland as this could often lead to finding them harassing an Owl or a much larger predator. Well last week this method paid off as I followed the ever increasing sounds of Magpies and Carrion Crows obviously unhappy at the presence of something within their woodland territory and I just caught a glimpse of a large raptor lazily flying through the trees to escape this noisy tirade. I hurried along the  pathways and just managed a single shot of a perched juvenile Common Buzzard (blotched streaked markings on  the breast) before it decided to move on to find a more camouflaged and peaceful location to rest. 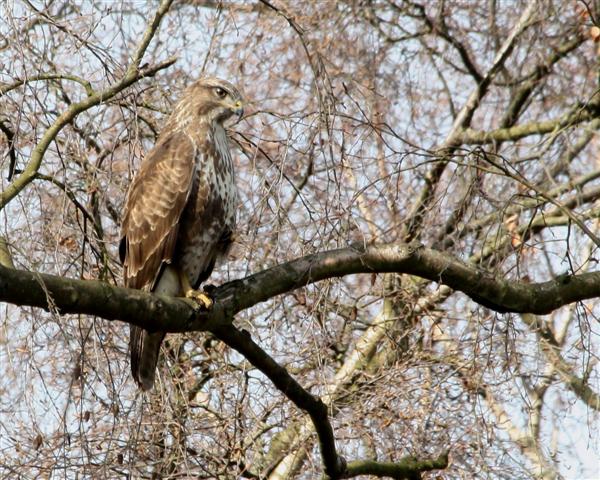 With sightings of Teal, Yellowhammer and Linnet in the last two days this years patch total is now up to 54 species.

I spent most of today undertaking a long needed task ..... cleaning out one of the garden sheds so that I can now step inside and hopefully find anything I may need! (Amazing the things I found that had been stored away and never needed .... another trip to the recycling centre will be required next week.)

Every half hour or so the shed resounded to the constant 'tap .. tap .. tap .. tap' as one of our annual nesters in the box on the outer rear wall carried out its usual spring clean. 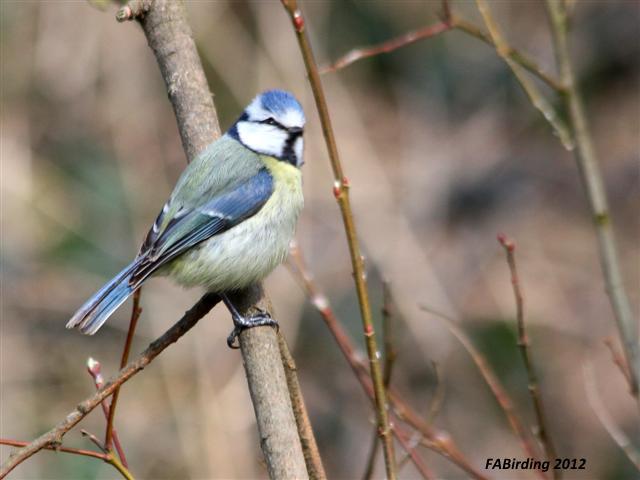 
We have been aware that likely tenants have been making brief inspections during the past two or three weeks so let's hope they have another successful breeding season.   FAB.
Posted by FAB at 00:45 6 comments: 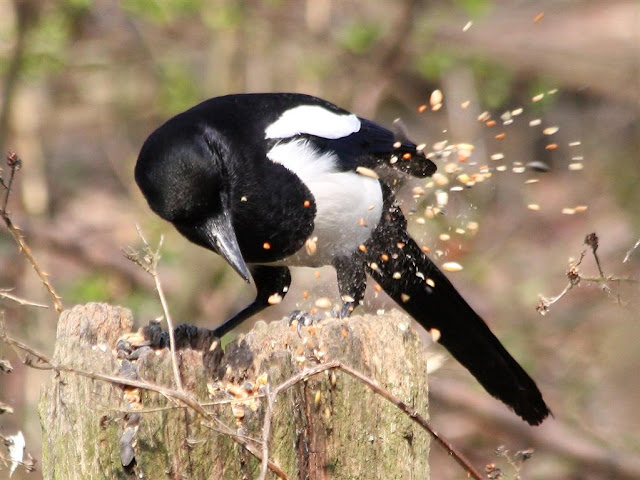 It is very rare for me to be able to get close to a Magpie (Pica pica) but during a visit to a location that I had not visited for many, many years, the activity of this individual intrigued me as it decided to scatter all the seed rather than eat any!


I hope to catch up with everyone in the next few days when I'll also post a local patch update plus some other recent outings  ...... FAB.
Posted by FAB at 00:13 22 comments: 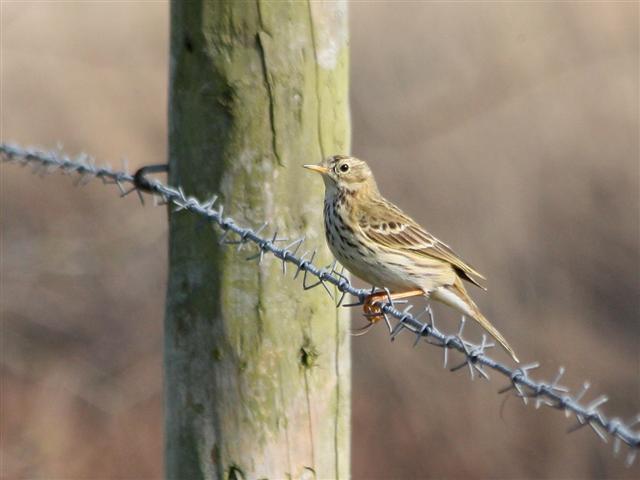 Pipits are typically rather small, slim passerines with a long tail and a pointed bill that spend much of their time on the ground. The Meadow Pipit (Anthus pratensis) is the most common species that we reguarly see and is a resident breeder in the UK. We are also able to witness their large passage movements from March to May and again during Septmber and October. Its normal habitats include open country, heaths and moors, plus coastal marshes, pastures and bogs.

This individual was photographed during a recent wander around Farlington Marshes  (click this link for previous posts and species seen at this coastal location). I would have preferred not to have the fence post in the background but you can clearly see all its distinguishing features including those extra long curved hind claws as it tightly gripped its barbed wire perch.   FAB.

For more images from around the globe ... check out WORLD BIRD WEDNESDAY.
Posted by FAB at 20:49 30 comments:

During a visit to my parents-in-law today on Hayling Island I was able to squeeze in an hour of birding around the old Oyster Beds before lunch. As it was already close to high tide I missed most of the wader movements and the very strong wind made hand-held photography practically impossible .... but you have to try ..... so here are some of the species seen.

A distant view of a flock waders, mainly Dunlin, moving to a fresh resting spot at high tide. 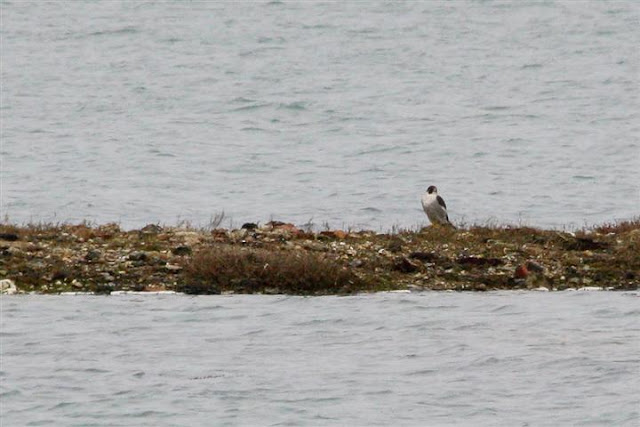 Distant Peregrine Falcon perched on one of the small islands still above water in the main harbour channel. 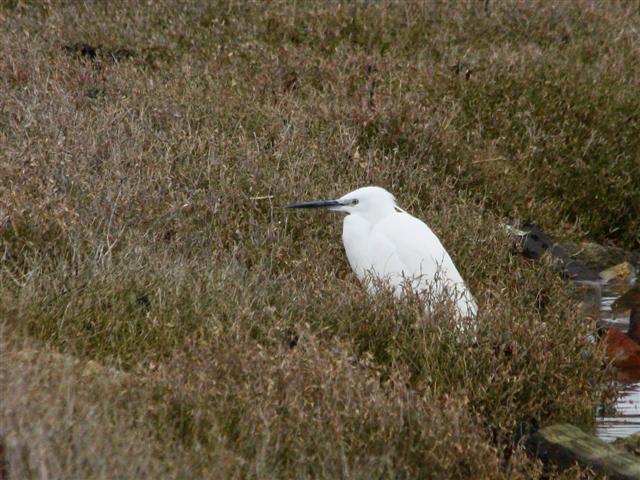 Little Egret hunkered down out of the wind. 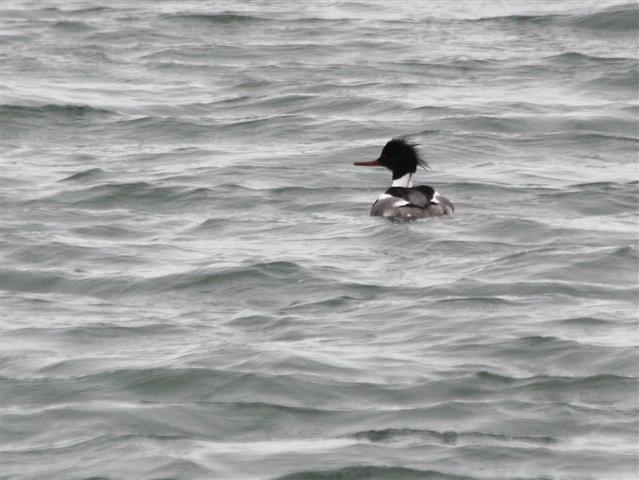 There were at least half a dozen Red-breasted Mergansers seen inside one of the disused oyster bed 'bunds' and I waited for what seemed ages in the hope that one might drift closer but as usual that didn't happen so here are a few of the cropped shots. 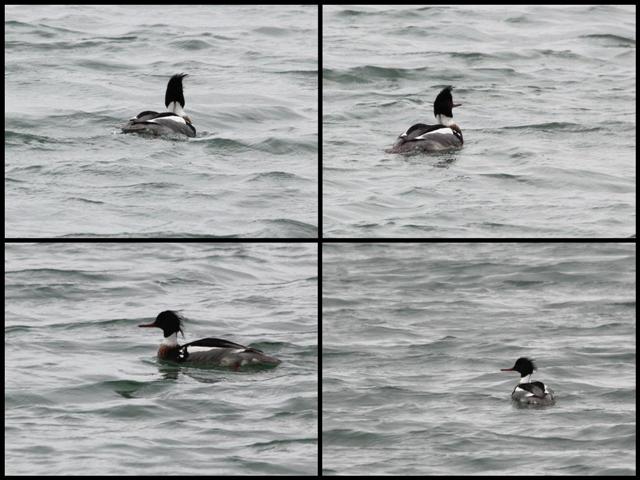 Wherever you are, have an enjoyable wildlife watching weekend.   FAB.
Posted by FAB at 00:23 15 comments:

A strong northerly wind put paid to any photos during a patch walk today plus most of the birds seemed to be hiding so here is a close encounter from last week. 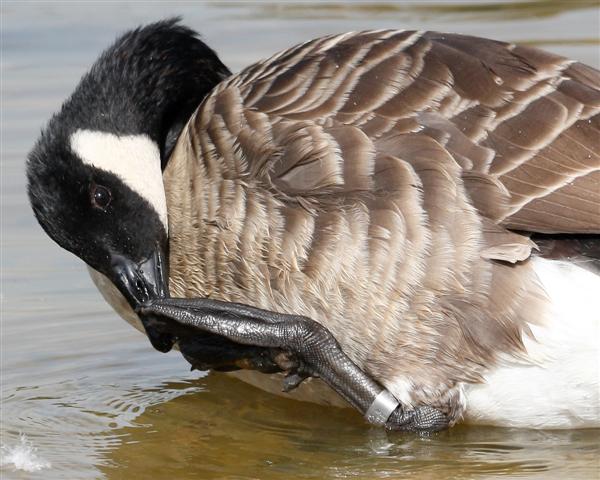 It has been a while since I posted anything about my local patch walks, mainly around Epsom Common Ponds and the surrounding woodlands, so here is an update including images of some of the regular winter species. 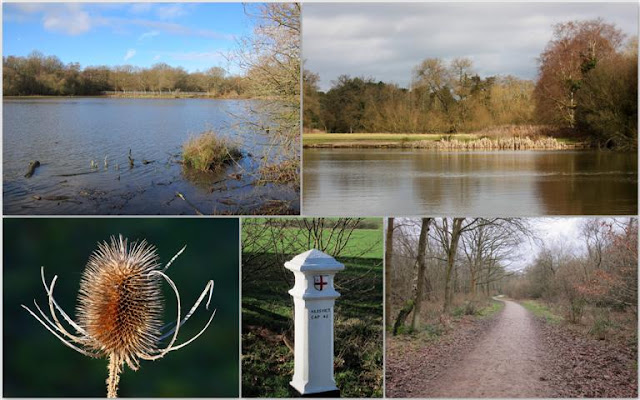 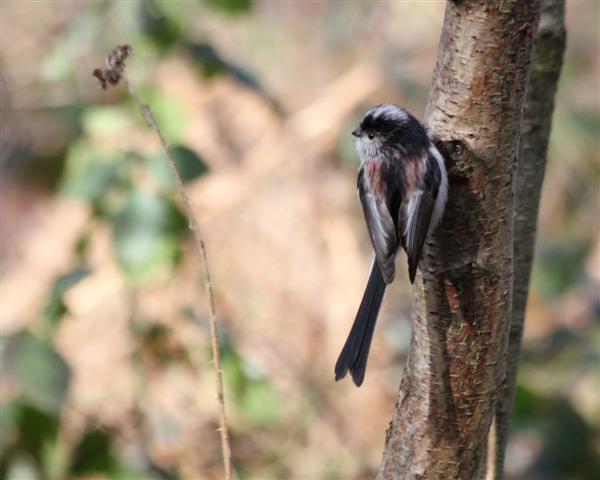 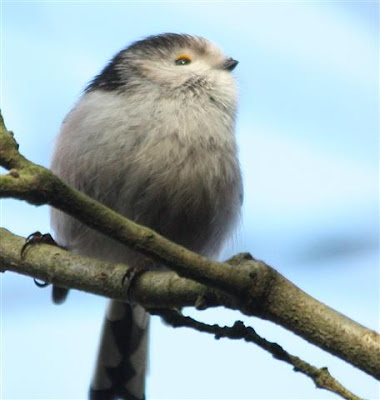 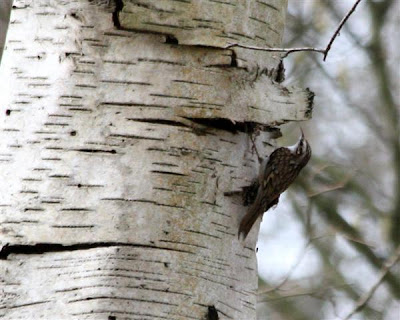 The other main inhabitants around the woodland edge during the winter are the visiting thrushes, Redwing and Fieldfare. Throughout January the numbers for each species were around 50 - 80 but in the last two weeks the numbers have fallen dramatically as they have stripped the berries from the ivy and probably moved on to a better feeding area. 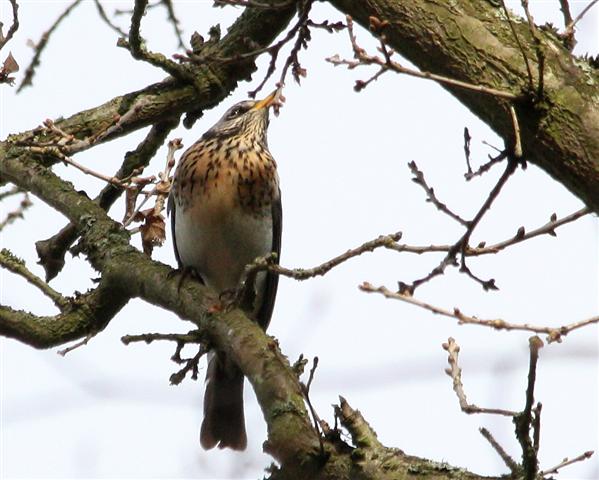 Fieldfare (Turdus pilaris) keeping a watchful eye out for predators

During the last month Woodpigeon numbers have increased dramatically and I estimate a minimum of 250 in and around the woodland. They are pretty skittish and fly into the air at the slightest disturbance and are providing a welcome daily meal for the resident Sparrowhawks which regularly glide over the treetops. The Crows get their daily exercise by mobbing the local Common Buzzards or chasing off a hunting Kestrel. 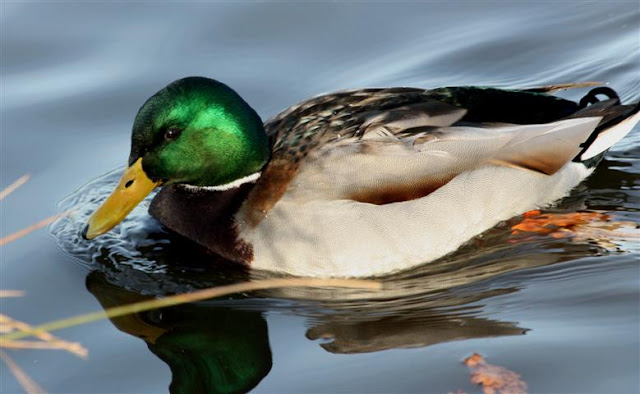 The main inhabitants of the small Stew Pond are the Mallard and Moorhens. 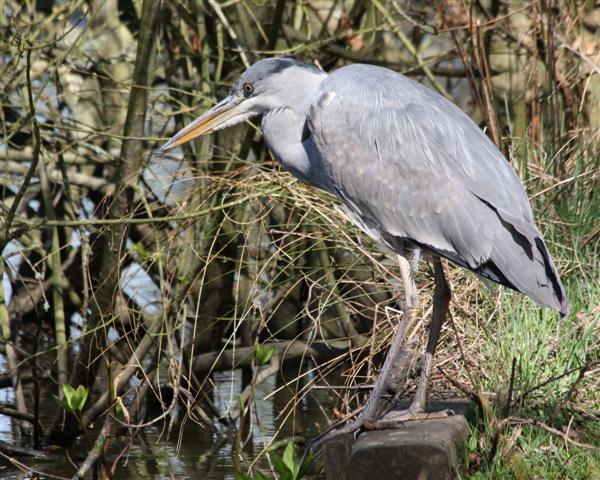 One of the resident Grey Herons (Ardea cinerea) can be found at one of their favourite fishing locations and usually tease me by allowing me to just get within range of the lens before flying over to the other side! 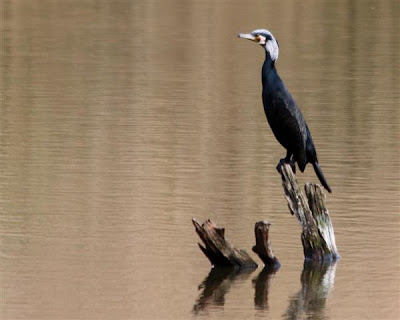 You will know from previous posts that I can usually find a Cormorant (Phalacrocorax carboresting on the Great Pond. This individual is an older adult in courtship plumage (evidenced by a white thigh patch ... hidden by its wing in this shot and the extensive white on the head and neck). 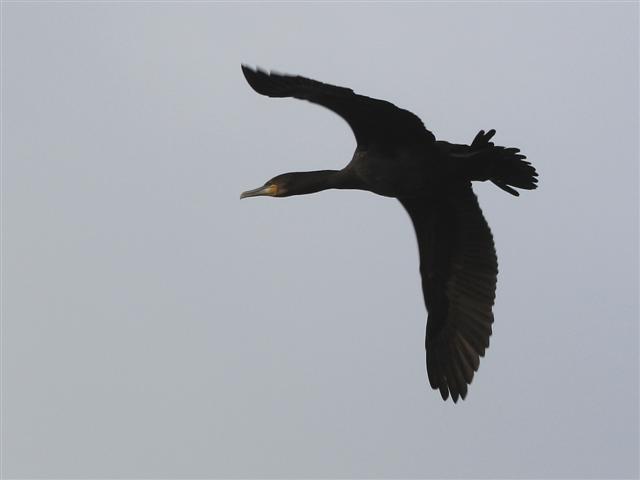 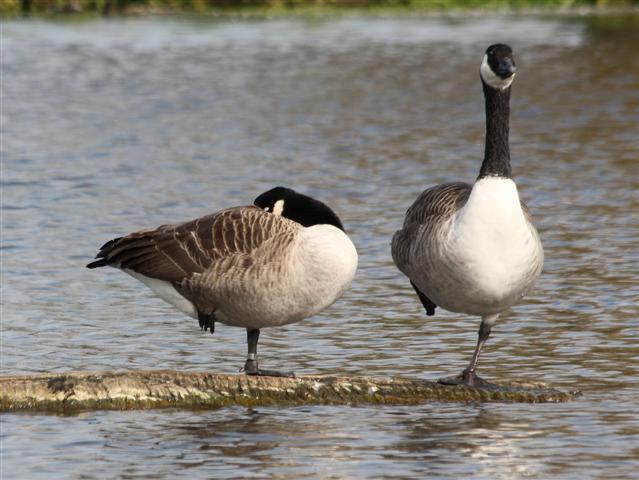 Canada Geese numbers fluctuate throughout the year but at least two or three pairs will probably stay to breed. I like the way that one adult always stands on guard while its companion is feeding or takes a rest. A male Tufted Duck made an appearance in early January but hasn't stayed. (A pair did stop and breed last year so maybe they will return now that the water is unfrozen.) 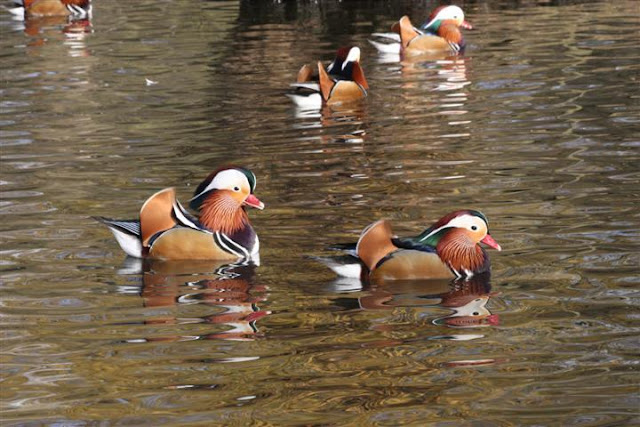 On 31 January, 15 male Mandarin Ducks (Aix galericulata) circled the pond and briefly dropped into an unfrozen area before flying away again. The following week I counted 5 males and 1 female but last week I could only spot one pair lurking in the shade of the main island. Hopefully they will stay to breed as in previous years. 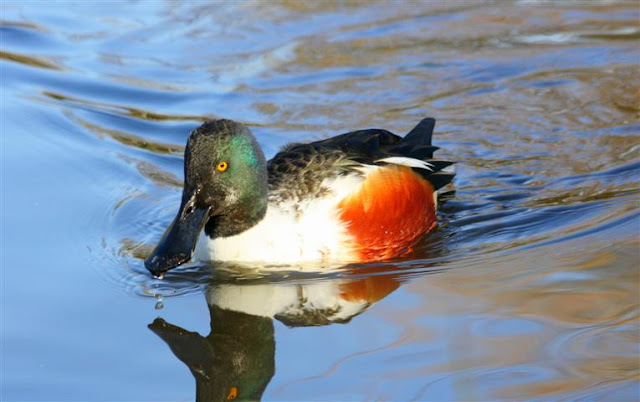 Another infrequent winter visitor to the Great Pond is the Northern Shoveler (Anus clypeata). Two males and a female turned up on 23 February but I don't anticipate that they will stay much longer. Other species seen are Stock Doves, Goldfinch, House Sparrow, Green Woodpecker and Black-headed Gull plus on the 28 February I located 13 Lapwing on the fields at Rushett Farm (Last year for the same week the count was 14!). 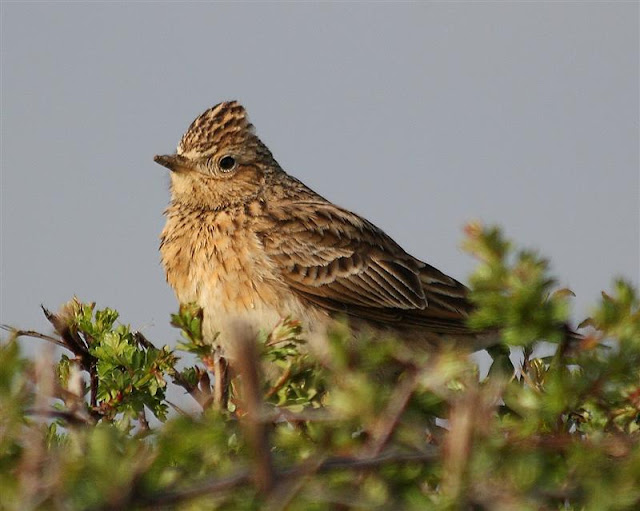 During the last two weeks as I skirted the farm fields I have listened to the beautiful song of the Skylarks (Alauda arvensis) that have returned to breed. This photo is one from the archives.    FAB.
Posted by FAB at 15:08 18 comments: 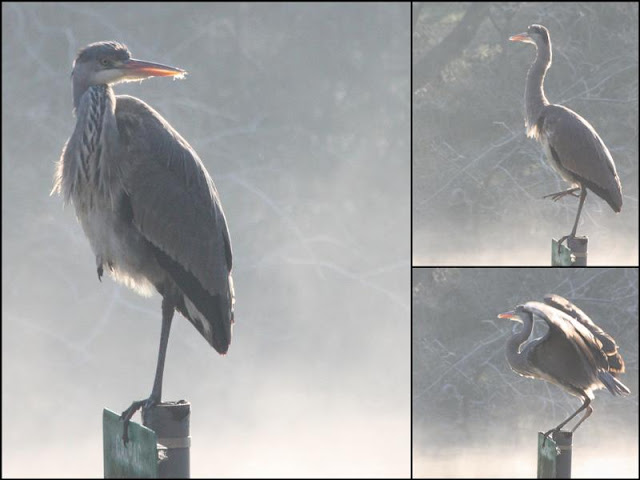 Another misty and foggy morning which didn't make focusing on the resident Grey Heron very easy but it was interesting to watch some its antics! 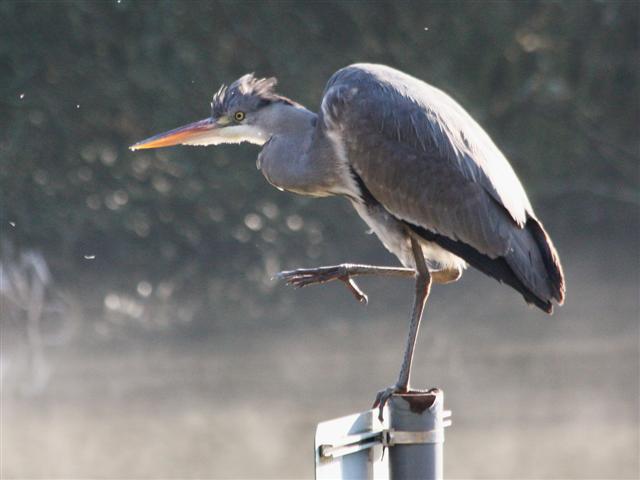 Maintaining balance OR practising the 'catch'? 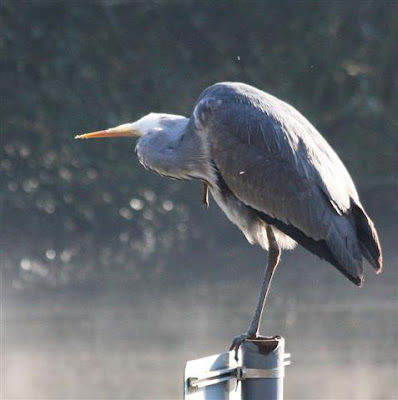 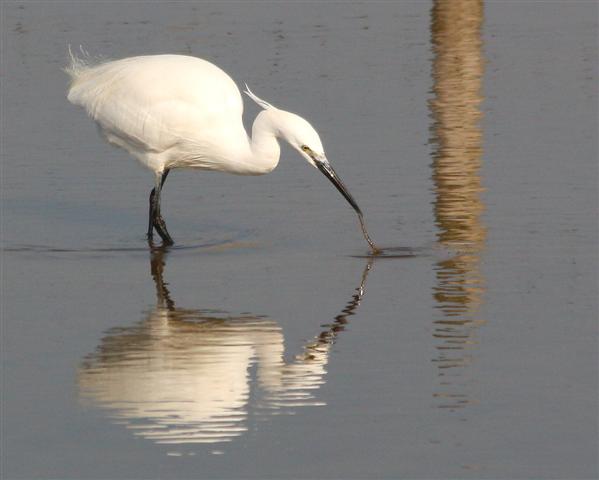 Little Egret (Egretta garzetta) finding something to eat. Taken during a visit to Farlington Marshes today. I will post some more from this trip once I have sorted through all the images.  FAB.
Posted by FAB at 22:34 20 comments: