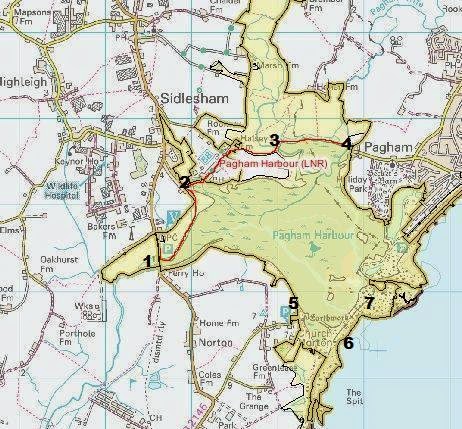 A fairly early start on Sunday morning saw me again driving the 60 odd miles southwards towards Pagham Harbour to join a field outing with the Surrey Bird Club (SBC).
Arriving well before the appointed meeting hour allowed time to scan the Ferry Pool at Sidlesham [point 1 on the map] where I logged Avocet, Shelduck, Mallard, Teal, Moorhen, Common Snipe, Common Sandpiper, Black-tailed Godwits, Golden Plover, one Dunlin, a single Mediterranean Gull amongst the many Black-headed Gulls, Rook, Crow, Magpie, Starlings, and several flocks of Pintail and Wigeon flying overhead out into the harbour.

As on previous outings our morning walk would take us from the Ferry Pool [1] skirting the harbour along its northwestern boundary to the North Wall [4] and return by the same route as there is no way of crossing the harbour entrance between the shingle spits. After lunch we would drive around to Church Norton [5], visit the beach [6] and walk the southern spit [7]. 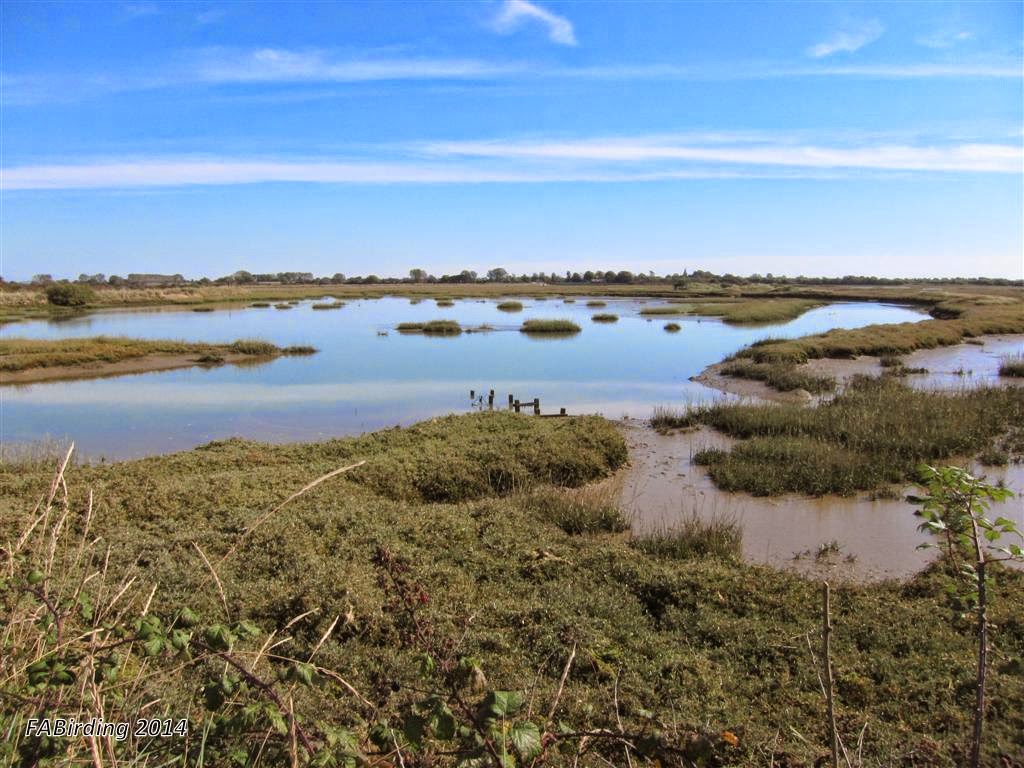 In my experience ideal conditions for birdwatching on an estuary are to arrive at least 2 hours before high tide so that the wildlife is always pushed closer to the watcher. Unfortunately for this outing the tide was on the turn so a scope was essential to pick out distant species. With hedges and high brambles bordering our initial route I spotted Blue and Great Tits, Chaffinch, Dunnock, Wren, Robin, Goldfinch, Chiffchaff and a female Blackcap gleaning insects while Curlew called as they flew to different feeding locations. Little Egrets also occasionally uttered their distinctive hoarse 'aaah' as they moved about. 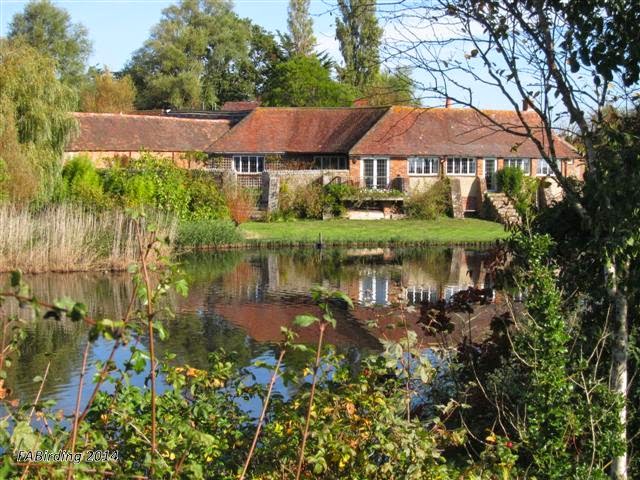 At point [2] a brief stop to check out the large pond in this property's garden.

In the past we have heard Water Rail calling from within the reeds here but not on this occasion. We did however get decent views of a couple of Little Grebe diving and nearby saw several Mistle Thrushes who were disturbed from their late morning feeding session. 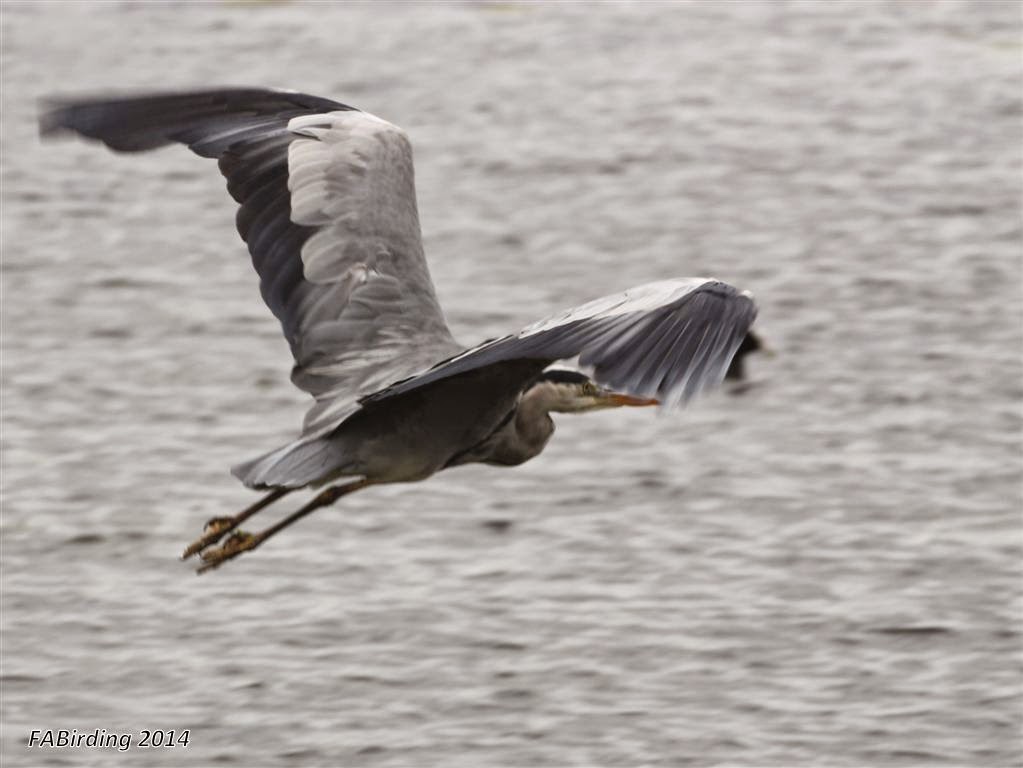 A Grey Heron crossing one of the few remaining stretches of open water.


On the ever increasing areas of mudflats we added Lapwing, Redshank, Grey Plover, a few Brent Geese plus Common and Great Black-backed Gulls while overhead there were Common Buzzard, Sparrowhawk and Kestrel. On reaching the North Wall [4] I watched a Water Rail move quickly between two stands of reeds and had much closer views of several Black-tailed Godwits preening and feeding on the inland pool. 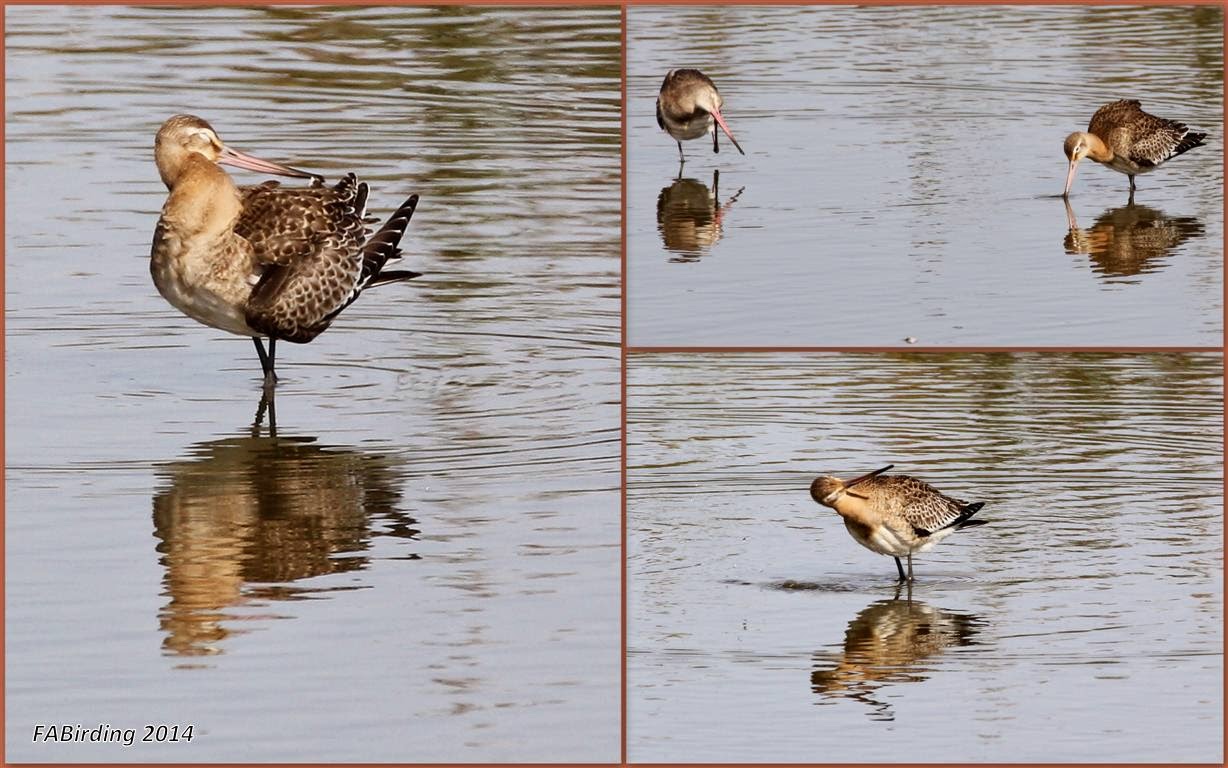 You can view more of my images of this species on FABirding. 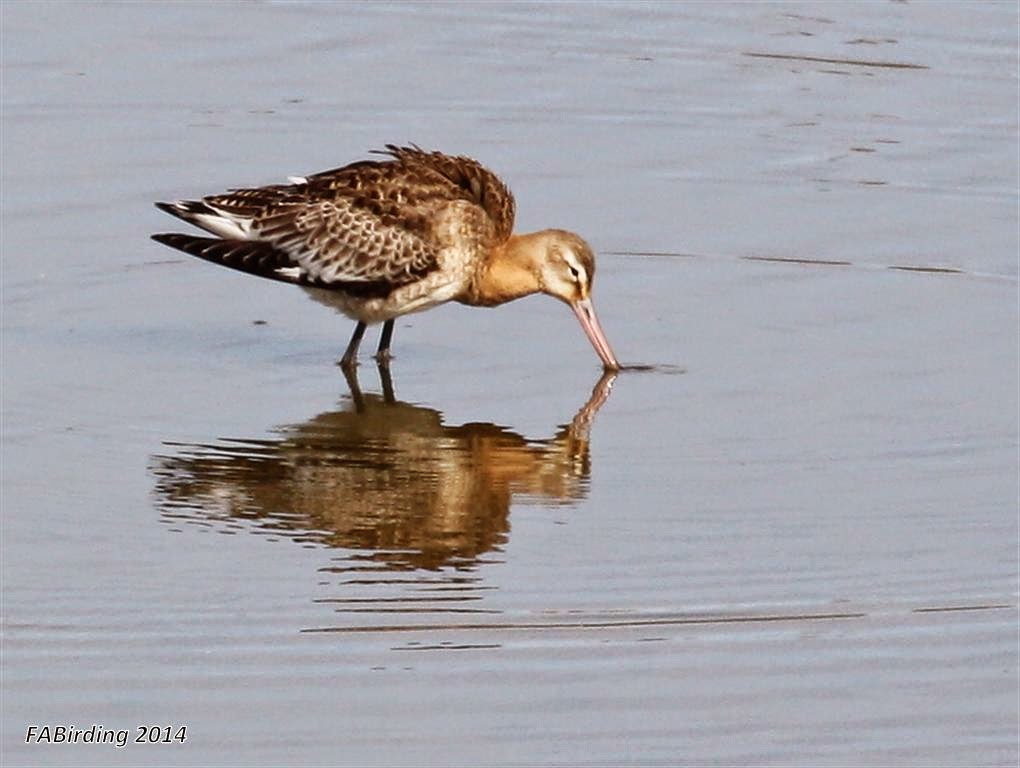 Close to the sluice a Kingfisher zipped past while scanning across the bright sunlit mud produced a Spotted Redshank plus more Golden Plover, Redshank, Oystercatcher, Dunlin and increased numbers of Wigeon. 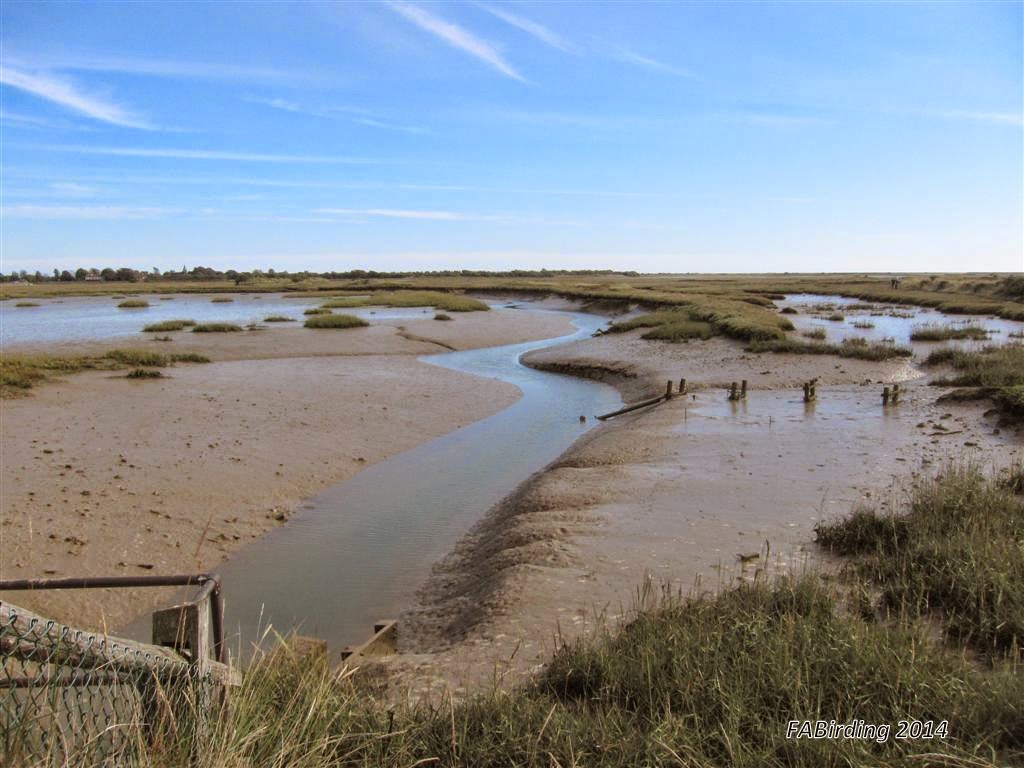 On the return walk the water level was still falling exposing greater areas of mud further up the harbour.

I added Wheatear, Pied Wagtail, Swallow and a single Pheasant. 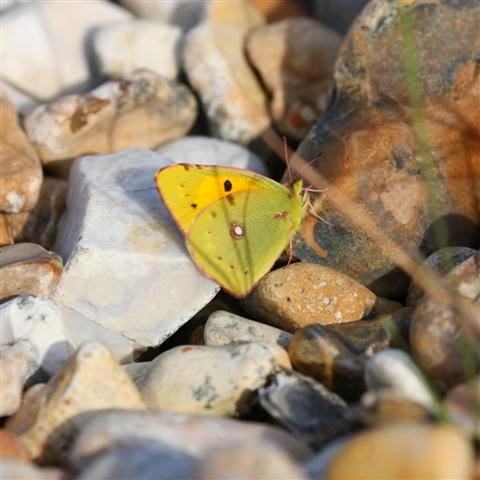 Butterfly species seen during this part of the morning were Red Admiral, Small Tortoiseshell, Peacock and a Clouded Yellow.

During our afternoon stroll along the shingle ridge I managed to catch a Clouded Yellow resting amongst the pebbles.


At Church Norton we added a few more waders to the day list; Ringed Plover, Turnstone, a leucistic (albino) Curlew and after much ID discussion a solitary Bar-tailed Godwit. Beyond a group of distant Cormorants we also located one of the resident Peregrine Falcons.

A bit of sea watching produced a few Great Crested Grebes and I eventually locked onto a an adult Gannet feeding way in the distance which was a much wanted species for the life list of one of my colleagues and a nice addition to my year list. 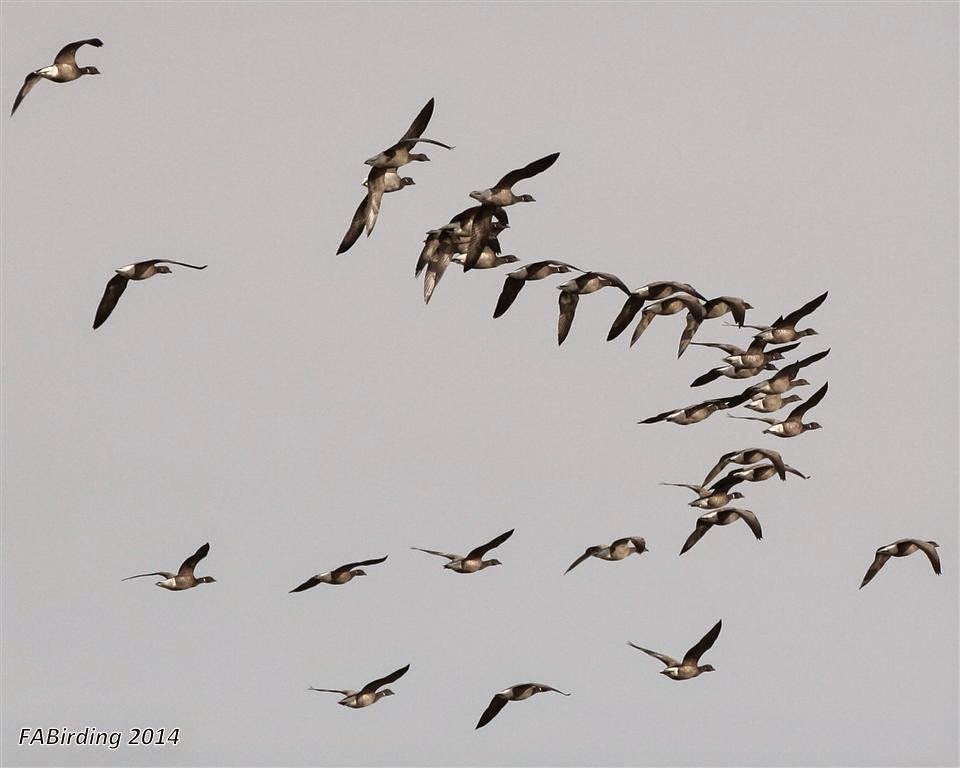 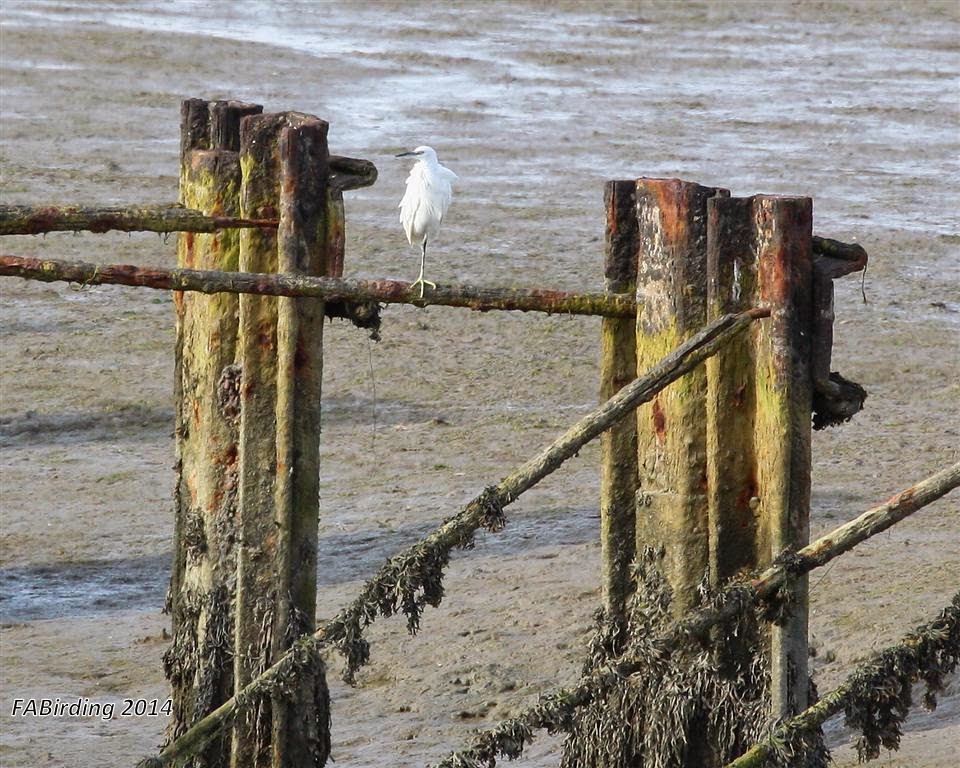 A Little Egret resting on the rusted remains of part of the old harbour wall supports. 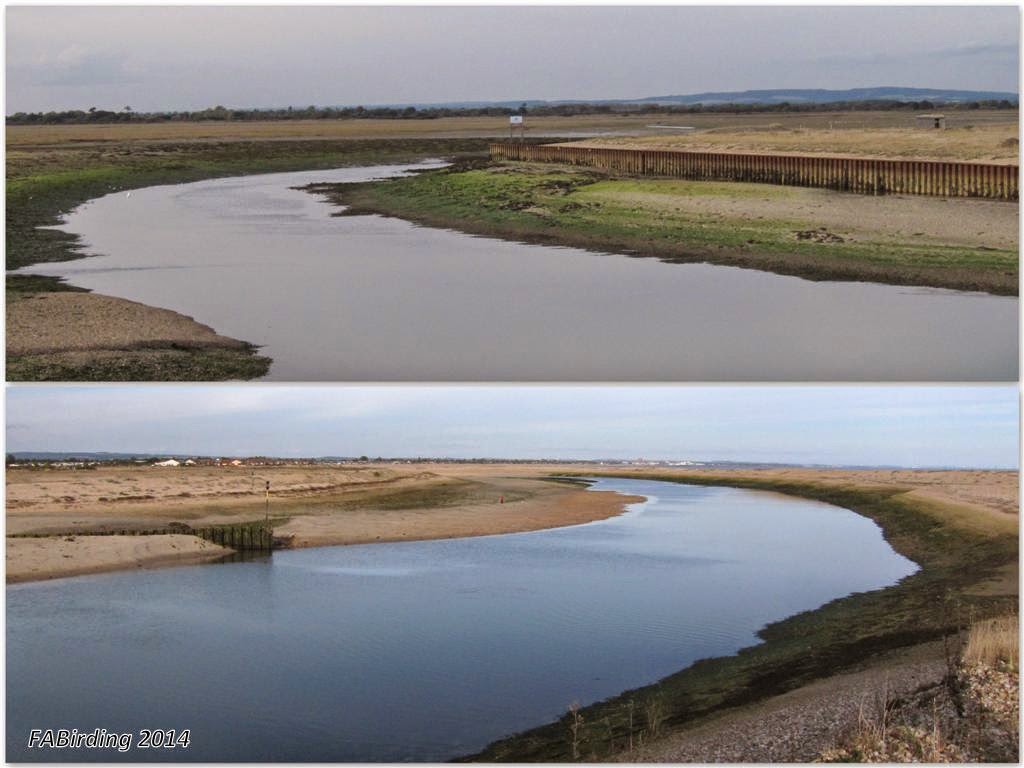 We trudged out along the open shingle spit in an attempt to get closer views of a large white blob on the far side of the muddy harbour. This shape eventually gave itself up as a Spoonbill with a blue/green leg ring but still too far away to read its number.

Due to the extensive winter storms the shingle spits on both sides of the narrow harbour entrance have dramatically changed shape.

At around 5pm after 8 hours of birding with a personal tally of 66 species seen it was time for me head home. FAB.

Linking to WILD BIRD WEDNESDAY.
Posted by FAB at 23:15