Tribute to the passing of an old friend.

I learnt by letter today that an old friend Cyril passed away at his home last Friday. Regretfully we had been out of touch for a while and not unnaturally I am feeling guilty for not keeping in contact.
I first met Cyril in 1995 when I joined the Surrey Bird Club and he was actively leading bird walks (even in his 70's) as part of the "Banstead Group". Anita and I turned up at Weir Wood Reservoir not knowing what to expect....but within minutes we were both deep in conversation with Cyril and all the other members of this local group as if we had know them all our lives. Cyril and I shared a common bond in that he was a consummate draftsman (map making during his Army life) and openly enjoyed and talked about his past experiences as a bird watcher however common the species. Over the following years I assisted him in compiling an annual outing programme plus leading some of the walks.
Some years ago his sight began to fail but with no chance of any remission and knowing he would be completely blind he still continued to maintain contact with his dwindling group of birding friends and still joined us on many outings. I particularly remember an annual evening trip to Bookham Common to hear / see Nightingales and despite his lack of sight he was still enthusiastic and joyful at just hearing this lovely songster even if from a long way away. Having walk from one side of the common to the other I offered to drive him and his long time friend Vic, who was struggling with a bad leg, back to the starting point. This meant a journey through the back roads which I didn't know very well at that time and in the dark. Cyril says "no problem I'll navigate". Well to my amazement he did just that using his memory of roads he had travelled in the past and even telling me in advance of when to turn at various junctions. Even when I commented that if we got lost I could hardly blame my 'blind' navigator he just laughed.
When he was fully sighted he set himself the task throughout the winter months of drawing and painting a wildlife picture as a tribute to his wife who passed away many, many years ago. These painting were then proudly hung around his home and I must admit now to coveting the one of the two Nuthatches - a superb piece of art. Kingfishers were also one of his favourites as were the common birds that visited his garden.
Thank you Cyril for imparting your infectious knowledge and introducing me to many species and new locations such as Cuckmere Haven, Sevenoaks, Rye Harbour, Tring Reservoirs, Hayling Island Oyster Beds, Weir Wood, Horsell & Bookham Commons just to name a few and for always providing the refreshments from the boot of your car whatever the weather.
At lunch time today I took a walk onto Battleston Hill to the feeder and not knowing what would come to pass.......here are three pictures of common birds [Blue, Great & Coal Tit] and a flowering Camellia that he would have enjoyed watching in his own garden. 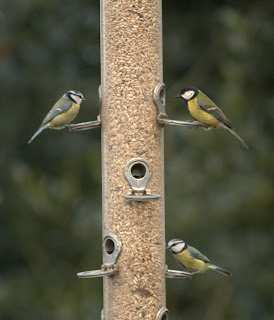 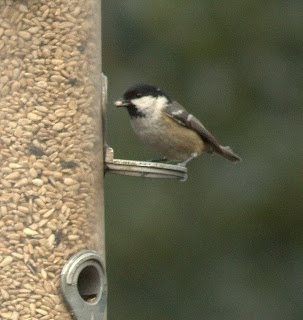 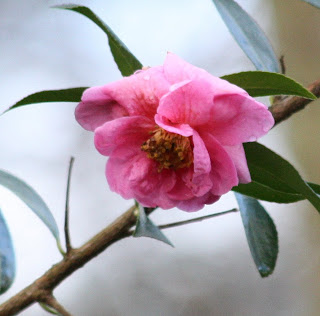 Bless you Cyril for all the memories - sleep peacefully old friend.
Posted by FAB at 21:02