I'm a little surprised that no comments have so far been left about the colour-ringed Black-tailed Godwit! Anyway I have submitted a sighting record and hopefully I will eventually get to learn something about it's life history.

It seems everyone likes the pics of the Little Egrets so here is a little bit of information.
A few facts - Little Egret (Egretta garzetta) first appeared in significant numbers in the UK in 1989 having first bred in 1966. Colonisation followed naturally from their range expansion thro' western & northern France in previous decades. Whilst we now see them all year round and their range is expanding both east and northwards their numbers increase in autumn - winter with birds arriving from the Continent. They are similar to Snowy Egret with large yellow feet. They stalk their prey in shallow water, often running with raised wings or use one foot to gently agitate the water to disturb and locate their prey of fish, amphibians, crustaceans and insects.
My first sighting - On 1st Jan 1994 I made what was to become an annual pilgrimage to Pagham Harbour. As always there were plenty of ducks and waders to keep me occupied but while scoping a distant reed fringed channel a 'white shape' caught my attention. For the next 30 or so minutes I constantly monitored this unmoving white blob while other birders passed by saying "it's only a white plastic bag". Well eventually the white shape revealed itself as a Little Egret as it flew up from the reeds and headed to another feeding spot in the channel. So my motto has since been - "patience usually pays off".
As it's been a day at home catching up on a few chores I located a few more photos of the delightful Little Egret. The final pic shows an adult sporting a head plume. 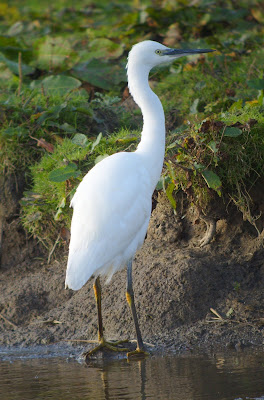 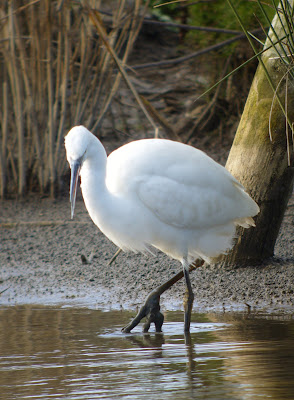 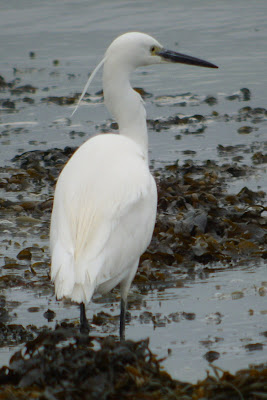