After a one and a half hour drive I arrived at Dungeness, Kent where the predominant landscape is wild and weird! Mile after mile of shingle that juts out into the English Channel which makes it the ideal location in spring & autumn to watch migrant birds. However, today it was sporting it's winter coat - very cold with a strong on shore wind, overcast, misty and very bleak. The whole area is dominated by the Nuclear Power Station. 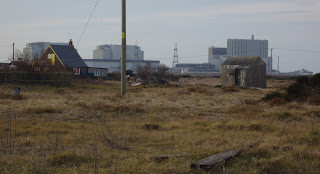 As you can probably guess the main local industry is fishing. 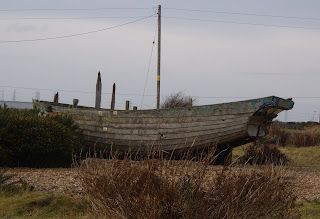 My first stop for birdwatching was the ARC pit and the main inhabitants appeared to be just gulls...Black-headed, Common, Herring, Greater Black-backed and a few Lesser Blacked-backed. 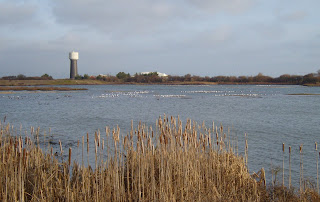 
Then I located the ducks, mainly Wigeon & Teal plus Northern Pintail, Shelduck, Coot and a single male Goldeneye.

Wigeon, Teal & Coot
On my return walk to the car I watched a Snipe drop into the marsh and immediately disappear and then a long distance view of Marsh Harrier.
Next stop was a circular walk around the RSPB reserve after booking into the Info Centre to buy a new logbook and check the sightings board that included Bitterns, Firecrest, Smew & Slavonian (Horned) Grebe - But bearing in mind the weather conditions what would I see? 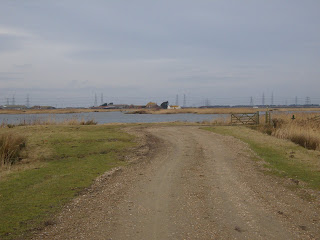 Denge Marsh
Well the list started off with Great-Crested & Little Grebes, Cormorants, Mallard, Coot, Wigeon, Teal, Tufted & Ruddy Ducks, Shoveler, Pochard and a single female Goldeneye. I scanned everywhere for a Bittern but not my day! However I did find a Slavonian (Horned) Grebe and a redhead Smew but they both dived for long periods and were too far away to get any photos. Large flocks of Starlings & Lapwings appeared in the air from time to time. 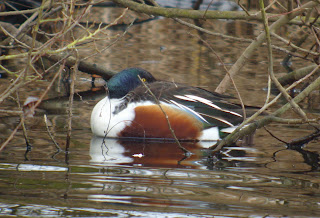 Resting male Northern Shoveler
While digi-scoping the Shoveler a Water Rail squealed from nearby but as usual didn't show itself. A pair of Wrens displayed, calling to one another, in nearby Salix. Another but longer view of a male Marsh Harrier floating over distant red beds and disturbing Wigeon & Teal into flight. Other sightings included Mute Swans, Canada Geese, one over flying Greylag, Blue Tits, Great Tits, Robin, Blackbird, Chaffinch, Magpies, Woodpigeons and Stock Doves plus hovering Kestrel. Other animals were Rabbits and the resident sheep. 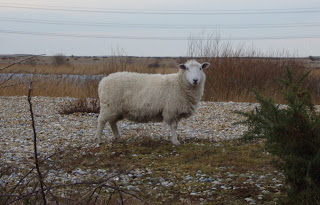 Who is looking at who?
I returned to the car via a new boardwalk which in the spring should produce a good location for migrant warblers. 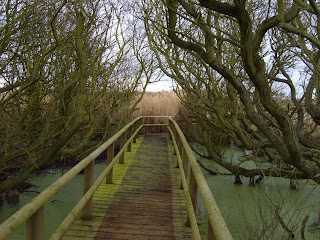 My convoluted journey home via Scotney Pits, Camber then on to Pett Pools produced Redshank & Curlew on the roadside fields. Great-crested Grebe (20+) and Common Scoters on the angry sea at Winchelsea. A male and a female Bullfinch feeding in a bramble bush as I drove through Fairlight. 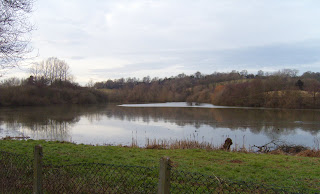 Weir Wood Reservoir
The last stop on the journey home was Weir Wood Reservoir but again very little activity on the water which was still partially frozen - a small group of Black-headed Gulls & Mallard. Whilst enjoying a much needed hot drink I was entertained by a Great-spotted Woodpecker, Dunnock, Long-tailed Tit and an unexpected Treecreeper only ten feet from the car but no time to get a photo...sorry folks!


So the total for the day was a creditable 57 species and has taken my 2009 year list to 96. Tony has just rung and wants me to take him to Farlington Marshes & then the old oyster beds on Hayling Island tomorrow so there is a chance we may add some new birds. If not it will be a day out in good company.