I have been spending a little time in the garden recently and realised that I haven't posted an update since mid April so have put together a few montages of the changes I've seen over the last month. 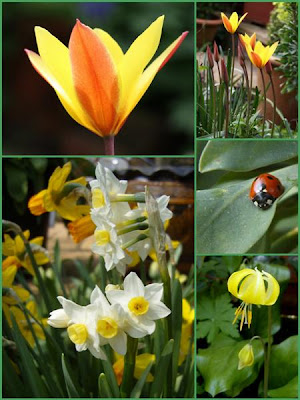 Towards the end of April the multi-headed Narcissus were doing their thing adding another dimension to the display of yellows and oranges. As the days get warmer the red-purple spikes on Tulipa clusiana var. chrysantha open to reveal its sunshine yellow petals. First sighting of a Ladybird helping to reduce the aphid population on a Euphorbia. The lantern of Erythronium 'Pagoda' brightens up a dark space in a shaded spot under the boundary fence. 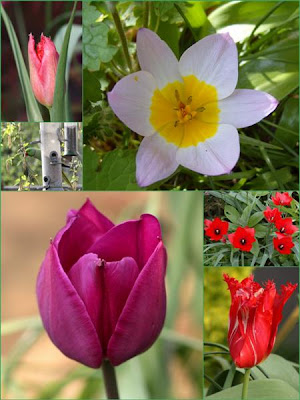 As I garden on heavy clay the large flowered Tulips are grown in few pots and the display was not as good as last year but they provided a splash of pink, purple and red for a short time. The specie Tulips including T.biflora (white with yellow centre) and T. humilis (red with black centre) are all planted under a tree or shrubs and continue to bulk up year after year. 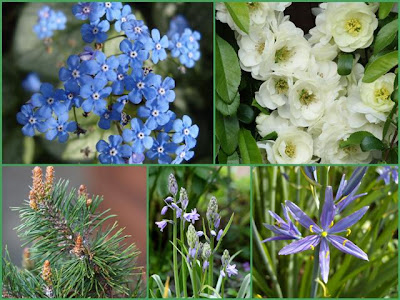 As we move into May, Brunnera 'Jack Frost' sends up its panicles of bright blue flowers; the ornamental quince (Chaenomeles speciosa 'Yuki-Goten') has produced a mass of blooms; the dwarf potted Pinus sends up new spikes; Bluebells (regretfully the non-native form and inherited) add more blue to the palette together with the spikes on the Camassia cusickii. 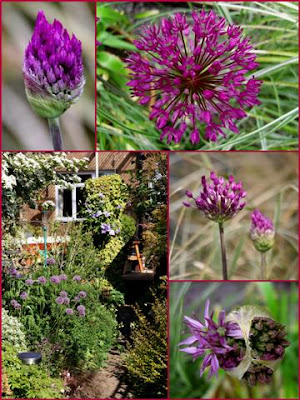 A number of different Alliums are planted around the garden and it's fun to watch the sheaths open to reveal the hidden delights as day by day the starburst expands to form their colourful spheres. 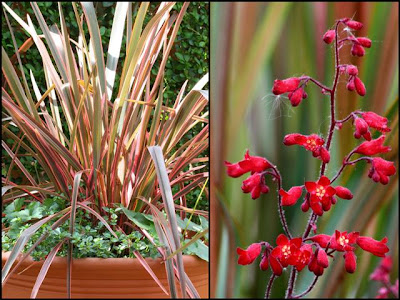 The two matching large Whichford Pots (a present from my friends at the pottery) which I planted up with two different Phormiums (Rainbow & Jester) underplanted with Thyme and Heuchera at the end of March are now begining to bulk up and I'm pleased with the combination but may need to add some bulbs for next spring.   FAB.
Posted by FAB at 01:01