Today I spent most of the day at Oare Marshes a KWT Reserve and logged a total of 54 species. My first encounter was a small group of House Sparrows and Reed Buntings feeding on fat-balls and seed on the edge of the car park. One individual kindly posed for me. 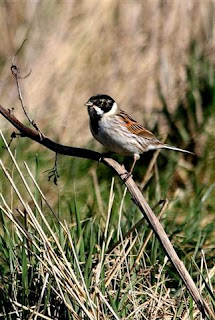 As it was low tide when I arrived I decided to take the path to Dan's Dock and was rewarded with more sightings of Reed Buntings everywhere plus dancing Skylarks, a few Linnets and Meadow Pipits. Most unexpectantly a Goldcrest also made a brief appearance. A male Marsh Harrier was being mobbed by Crows on the other side of The Swale. Sparrowhawk & Kestrel were also seen. On my return walk I snapped these three "Tufties". 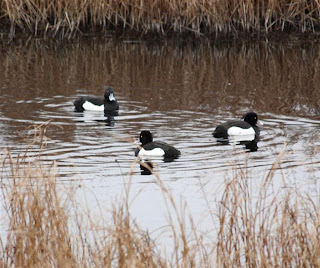 Konik are an unusual breed of small horse, or pony, originally from Poland. This stocky and hardy breed shows many of the characteristics of the Tarpan, which was the original wild horse of Europe's Forests. Koniks have proved to be ideally adapted to year-round grazing on grassland and wetland habitats and they have been used by several conservation organisations to help manage nature reserves both in Britain and Europe.
These two were having a running battle but when I got close enough for a picture they stopped fighting - just my luck! 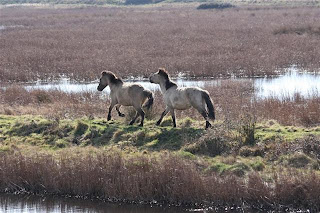 Very few waders flew into the East Flood as the tide rose apart from good numbers of Common Redshank plus one Ruff (new tick for 2009) and I spotted at least 12 Common Snipe but none of them were particularly obliging nor was the light! So only managed a 'rear' view. 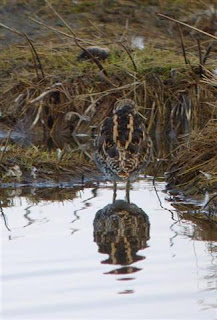 And once again, nearly the last bird seen was another Reed Bunting...I lost count but it was definitely their day.