This afternoon a confiding Eurasian Collared Dove (Streptopelia decaoto) spent some time loitering in the hawthorn and allowed me to get some reasonable pictures.
It is an anaemically coloured dove with a long tail and a thin but conspicuous white-edged black neck ring. The underside of its wing is uniform pale colour, not contrasting with its belly. Easy to tell in flight with its distinctive wing flicks without a constant beat. It also has a highly repetitve call which sounds like 'un-i-ted' as chanted by certain football fans. Starting around 1900 this dove made what has become one of the most rapid expansions ever recorded for a bird working on its own terms.Working its way from Turkey, roughly northwest, it settled in central Europe by 1957, Britain, France & Italy by 1963 and then northern Spain & southwest Fennoscandia by 1977. By the end of the century it had made its way eastwards to the Caspian Sea and beyond. The population in Europe at the beginning of the 21st century is estimated as 14 million pairs. 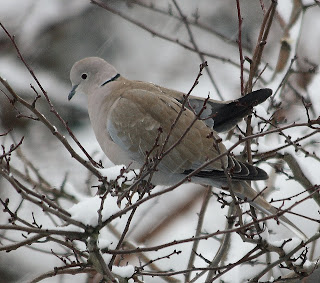 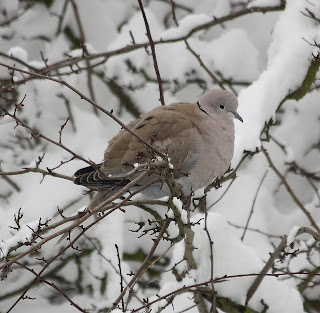 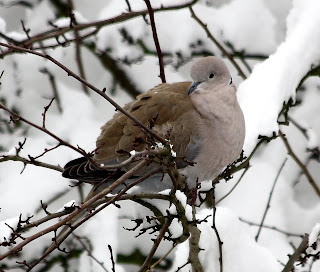