After a brief trip into Kingston the cold kept me indoors today but I was rewarded with more visits by a returning Goldcrest and a pair of Long-tailed Tits. Unfortunately taking photos thro' double glazing is not producing the sharpness & quality that I would prefer to post but as 'garden' record shots these will have to do for now.

The Long-tailed Tit (Aegithalos caudatus 'europaeus') is closely related to true tits (Parus) but classified in a seperate family. 13-15cm long and in flight, skipping with short undulations, it looks like a tiny ball with a long tail (7-9cm). Family parties are usually seen in in mixed or deciduous woodland with occassional brief visits to gardens as they quickly pass through. Today a pair visited on several ocassions to top up their reserves on the new fat cake feeder but always at the same time as the Goldcrest - Have they been talking to one another?
I never tire of watching their accrobatics as they often feed hanging upside down from the ends of tiny branches, bouncing around like a yo-yo. I also remember being shown their nest some years ago, made mainly from moss held together by spiders' webs - a closed oval shape that cleverly expands as the chicks grow bigger & bigger prior to fledging. 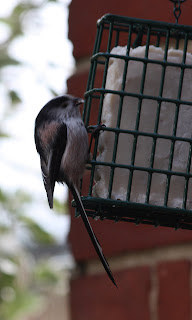 FABirder fact: Members of the Tit family are accrobatic & regularly feed upside down BUT have you ever noticed that later in the day they DONT do this. The reason is that as their weight increases with the intake of food they are not so agile so adopt an upright position to feed. 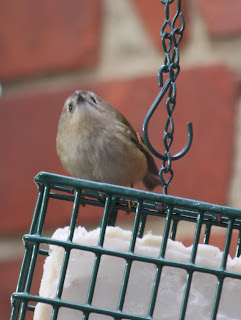 The Goldcrest (Regulus regulus) is the smallest breeding bird in Europe. It occupies a niche location, only shared with the Firecrest, where its tiny thin bill is adept at locating small insects from the spiky leaves amoungst the branches of thick conifers, mainly spruce & fir. To maintain its body weight & internal temperature in order to survive they constantly feed all day long, particularly in these cold conditions and will often be sighted within mixed Tit flocks. When two rivals meet they ruffle their crown feathers to show off the yellow & orange stripe on the head - a similar scene is witnessed during a courtship display between male & female. 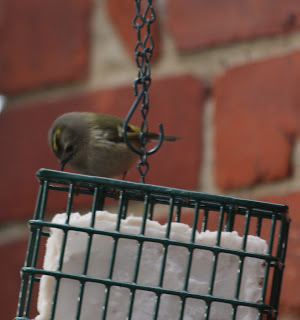 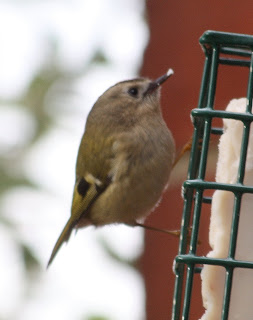