In Sept 2007 we opted for an organised birding tour to Eastern Bulgaria on the Black Sea coast. Arriving at Varna Airport at 11 p.m. we met our local guide Nikolay who introduced us to the ‘Yellow Rocket’ our transportation for the next 7 days. During our journey to Karvana we experienced the full force of an electric storm and arrived at our hotel at 1 a.m. in the middle of a torrential rain storm with the hotel in total darkness due to a power failure. This was something we would get used to over the next few days! The next challenge once inside the building was to locate torches hidden away in our main bags and then find our rooms. Power returned briefly sometime after 2 a.m. 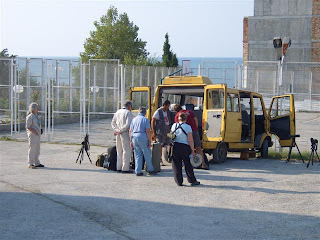 Most of the bird photographs were taken by James Lidster, a professional tour leader who works for Sunbird Tours and are reproduced here (some after cropping) with his kind permission. For more images please visit his new ‘dutch’ blog where there are also links to James images from various tours. 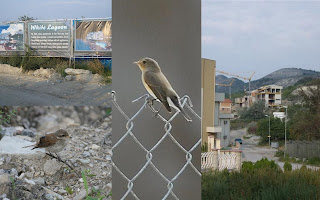 Work in progress at Kavarna, Red-backed Shrike & Red-breasted Flycatcher
Every morning started with the usual optional pre-breakfast walk. There were regular cries of “Yellow Wags and Tree Pipit calling” from James and high above us we could just about locate the small dots flying southwards but never coming to ground. During our first day we drove to various locations around Kaliakra and Yailata; areas of vast open steppe and agricultural landscapes broken only by lines of trees planted to provide wind breaks and the coastal cliff-tops with low scrub vegetation burnt to a crisp by a very dry spring and summer. The highlights included massive flocks of Calandra Larks showing their dark under-wings in flight with excellent views of a pair of Saker Falcons plus Marsh and Montague’s Harriers. 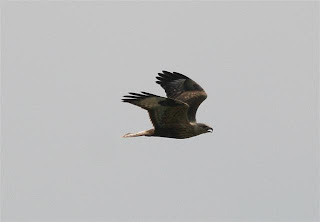 Long-legged Buzzard
Other raptors passing overhead were 20 Common Kestrels, 7 Long-legged and 2 Common Buzzards following the coastline on migration southwards plus a single Short-toed Eagle. The road side wires provided resting perches for a few Rollers, 30+ Bee-Eaters and more Turtle Doves than I have seen in total over the last 15 years in the UK. A search of a rough stony roadside area produced Stone Curlew with attendant Hoopoe, Northern and Isabelline Wheatears. At Cape Kaliakra Nikolay showed us Pied Wheatears which breed locally followed by an interesting lunch of battered shark and chips. Throughout the day hundreds of Barn Swallows and House Martins passed overhead and Red-backed Shrikes seemed to be perched all around us. 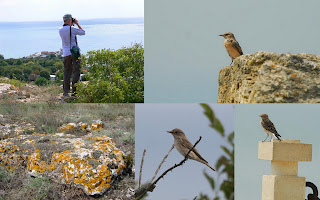 On day 2 we drove north towards the Romanian border. Again the roadside wires were littered with increased numbers of Rollers, Bee-Eaters, Turtle & Collared Doves and my first ever sightings of two Lesser Spotted Eagles floating lazily high above us. Scanning over the Black Sea from the shoreline at Durankulak Lake produced Great Crested, Black-Necked and Slavonian Grebes plus good numbers of Mediterranean, Yellow-Legged, Black-headed and Little Gulls. During a brief walk alongside the extensive reed beds we were rewarded with brief views of Great Reed Warbler, a skulking Savi’s Warbler and a single Quail shot across our path and disappeared into the reeds. Other notable sightings were a Bittern and Purple Heron in flight over the reeds plus 50+ Pygmy Cormorants roosting in the bare trees. A visit to Shabla Lake in the afternoon commenced with a verbal exchange between Nikolay and two local hunters - they didn’t appear too friendly! Despite low water levels we saw our first Common, Sandwich and 5 Caspian Terns plus a mixture of waders albeit at some distance. Nearby trees however held our attention with excellent views of Spotted and our first Red-breasted Flycatchers followed by fly past of a dozen Golden Orioles. Corn Buntings made their first appearance and Swallow numbers for the day reached 400+. Sightings of Marsh Harriers, mainly juveniles totalled 24 plus Levant Sparrowhawk and Buzzards. 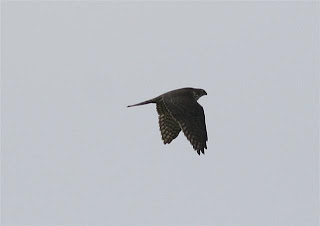 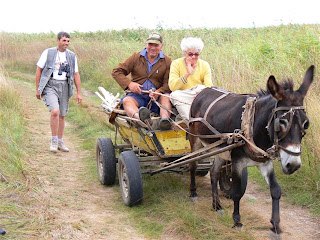 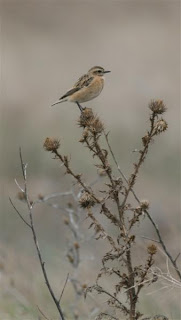 Whinchat
We returned to various areas around Kaliakra and the coastal cliff-top at Rusalka on day 3 with numerous roadside stops for migrating raptors including juvenile Pallid and Montague’s Harriers, which tested our identification skills, 3 more Lesser Spotted Eagles, 5 Hobby plus Common and Long-legged Buzzards in various stages of juvenile plumage. The afternoon stop at Boleta Valley, a narrow gorge with verdant growth around a small lake and stream leading to the sea, was to prove a migration highlight. 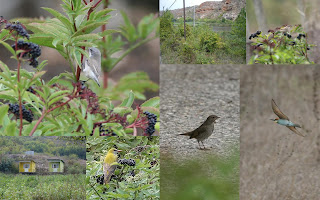 A massive fall of Sylvia warblers feeding on berries included 200+ Blackcap, 200+ Common Whitethroat, together with 50+ Lesser Whitethroats complemented by Spotted and Red-breasted Flycatchers, with Golden Orioles flying and calling overhead plus excellent views of two showy Thrush Nightingales located by James and Nikolay by their single note migration call which is very similar to that made by Common Nightingales. The experience was further enhanced with 8 Squacco Herons, a Ferruginous Duck, and Levant Sparrowhawk with the constant presence of Bee-Eaters and Alpine Swifts amongst the other hirrundines all around us. Everyone agreed that if you could pick a ‘local patch’ this site would be perfect with its wide mix of habitat and the gorge caves regularly holding a pair of breeding Eagle Owls. A dusk visit to a cliff face close to our hotel finally gave us a chance to scope an Eagle Owl perched high on the cliffs with another individual calling nearby but too dark to capture on film!


My lasting impression of this north-eastern corner of Bulgaria will be the superb scenery of vast open landscapes and the mainly unspoilt habitats although there was clear evidence of the effect of their very dry spring and summer with mile upon mile of devastated crops of Sunflower and Maize that will not produce any income plus the ever increasing installation of Wind Farms and their attendant services that will and already have damaged acres of land that in the spring are a riot of colour. 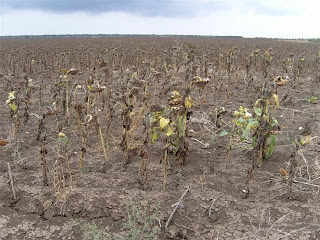 Our last day at Karvana started with an early pre-breakfast walk during which we located our first reasonable view of Syrian Woodpecker plus a fleeting glimpse of Icterine Warbler whilst seeking out Wood and Willow Warblers flitting about in thick vegetation. We then travelled south stopping at Goritsa Forest and although the woodlands were very quiet we gained brief views of Short-toed Treecreeper, Grey-headed, Syrian & Middle Spotted Woodpeckers followed by an excellent meal in the forest restaurant. 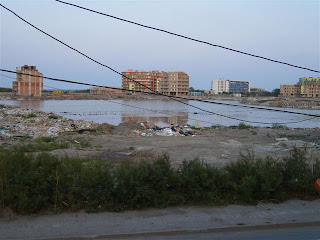 Building on the Saltpans at Pomorie!
For the last 3 days of the tour we were based in Pomorie, near Bourgas with its local Saltpans and extensive lakes. Whilst some of the saltpans around Pomorie are ‘protected’ there was again evidence of frantic building activity including the dumping of waste directly into the un-worked pools to provide additional building land! The lakes were stacked with birds, thousands of Coot, hundreds of Garganey, Ferruginous Ducks and Moorhen (I counted 147 in one location), with scores of Squacco, Purple and Grey Heron plus fly-byes of Black-crowned Night Herons. 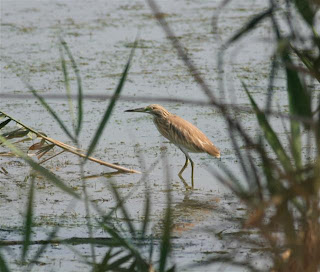 At the main Bourgas Lakes we were rewarded with the sight of over 3,000 White Pelicans on two days together with plenty of Dalmatian Pelicans to test our comparison skills plus 4,000 White Storks flying overhead and a few thousand dropping into roost in a field later in the day. 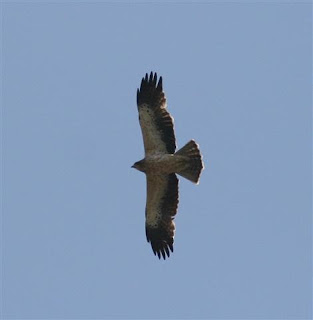 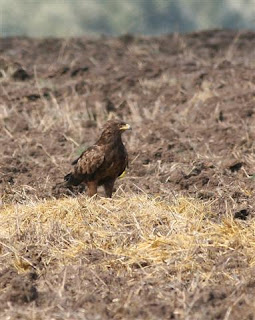 Lesser Spotted Eagle
Whilst raptor numbers stayed relatively low the variety increased with additional sightings of Goshawk, Booted and White-tailed Eagles, two groups of Honey Buzzard totalling 30 plus more views of Levant Sparrowhawks and Lesser Spotted Eagles including one individual perched in a field being ploughed and totally unconcerned at the proximity of the tractor. The furrows and muddy pools were also littered with juvenile Black-headed Yellow Wagtails (feldegg) busily feeding before moving further south. 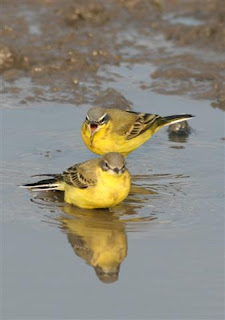 The various Saltpans provided a list of around 30 shorebirds and waders including 50 Marsh Sandpipers, numerous Little Stints with a few Teminck’s; Kentish & Little Ringed Plovers; good views of 6 Broad-billed Sandpipers plus lots of Wood Sandpipers (40+), Curlew Sandpipers (50+), a few Green Sandpipers, and the usual Redshank, Greenshank, Ruff and Dunlin etc. in various plumages. We also enjoyed the constant calls of large numbers of Common and Sandwich Terns with over 100 Black Terns together with several Whiskered, Gull-billed and one juvenile White-winged Black Tern. 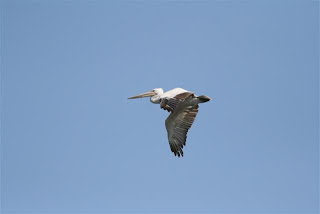 The pace of this tour was very relaxed and enabled us to enjoy the superb, mainly unspoilt scenery, although there was daily evidence of the coastal strip development with numerous buildings, hotels and apartments, under construction and I can only hope that the local population do not get left behind with the scale of tourist lead expansion that is being carried out. Food during our tour was typically local dishes including large salads with plenty of cheese (goat, sheep & cow or a combination according to Nikolay) and I also gained a liking for Bulgarian yogurt, something I thought would never happen! Whilst my final total was 170 including 15 ‘lifers’ the lasting impression will be the pleasure of watching visible migration, the scenery, the food and all in the company of a very experienced and friendly Sunbird (James) and Bulgarian (Nickolay)guides.