On Sunday Anita and I travelled to Pagham to meet up with Tony & Jean, Trevor plus Keith & Sue (they emigrated south-west to Somerset some years ago but make an annual visit back to Surrey to see relatives at this time of year). When the others arrived I was already scoping Gulls & Waders on the shingle spit at the harbour entrance enjoying good, if long distance views, of Mediterranean (min x 14), Black-headed & Herring Gulls plus a large high tide roost of Knot, Turnstone, Redshank plus a few Oystercatchers and a Little Grebe in the channel. 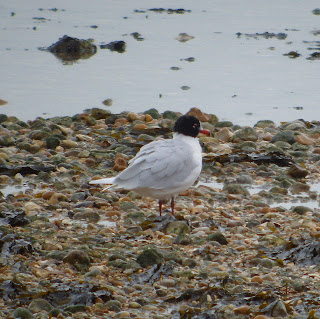 Mediterranean Gull
After a quick catch up and introduction to Hugh (Keith's nephew-in-law) we commenced our walk around The Lagoon towards the North Wall after seeing Greenfinch, Dunnock & Kestrel. The lagoon produced Common & Great Black-backed Gulls, Goldeneye (2 females), Wigeon, Teal, Mallard, Moorhen, Tufted Duck and numerous Coot (not Tony's favourite!) using their extraordinary feet to walk, sometimes not too elegantly, across the frozen water. Tony & I had a brief view of a Sparrowhawk dashing over the reeds and then disappeared into the Caravan Park [not seen by the others who were probably chatting!]

Coot on thin ice!
Brent Geese were moving around and 30+ were in the field beyond the Caravan Park plus a large flock of Linnets (40+), highly mobile and only perching briefly. We scanned for any interlopers in the flock but only found another group of Reed Buntings (12+) in the same area [I've not seen that many together before] plus a few Chaffinches (mainly females). Grey Plover scoped through a gap in the hedgerow. 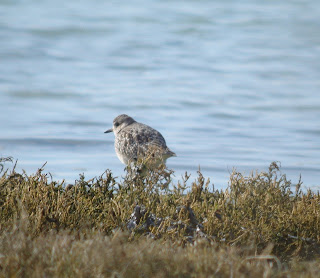 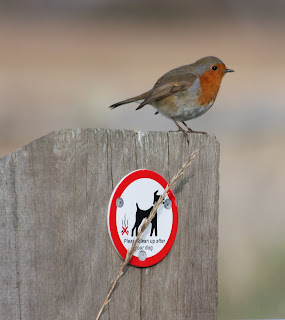 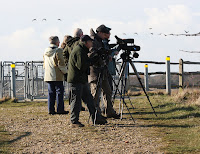 From the embankment we had excellent views of Brent Geese feeding in the fields with Curlew, Lapwing, Starlings, Carrion Crows & Golden Plovers plus two Pheasants and a single Meadow Pipit. Hugh located Common Buzzards (3) soaring at long distance and in the harbour as the tide turned there were Black-tailed Godwit, Grey Plover, Dunlin, Redshank, Knot & Shelduck together with the usual ducks including Northern Pintails. Just after everyone decided it was time to return to the cars for lunch I found a Spotted Redshank feeding in a channel exposed by the falling tide. Unfortunately with the sun in my face it was impossible to get anything but a record photo. [Was this the same individual that we saw on 1st Jan?] 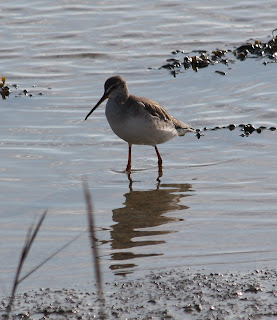 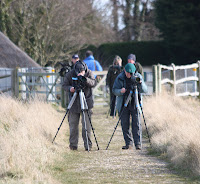 Have the others seen the Spotted Red? 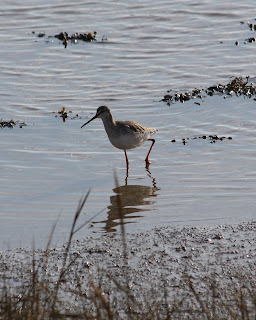 As we started to leave the North Wall something upset all the birds & we had excellent views of the oo's of Brent Geese & various waders flying around and then settling back on the exposed mudflats. 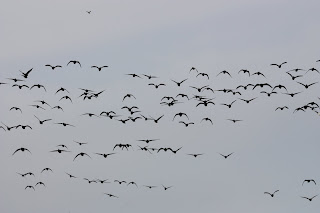 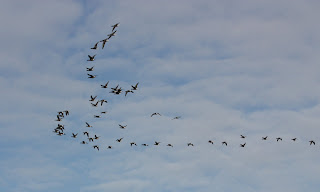 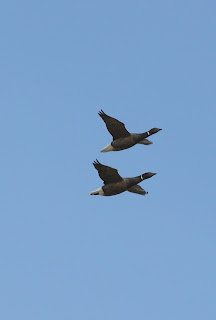 The return journey was fairly uneventful apart from me slipping in the deepening mud as the tide receded and ending up on my knees in order to keep bins, scope & camera from being damaged - just my pride & wet, muddy trousers!

After eating our packed lunch we walked out to view the spit so that the others could catch up with the Med Gulls and also added Common Ringed Plover & Grey Heron to my list which totalled 51 for the day. With a dramatic change in the weather - rain coming in from the west we all made our own ways back home to Surrey.
Posted by FAB at 23:04