I have not yet been successful in photographing a Dunnock (Prunella modularis) in my garden so I thought I would share some pics taken of a confiding individual on a recent coastal birding walk. Adult plumages are very similar with House Sparrow-like brown streaked upperparts plus the characteristic lead-grey head. The breast, ear-coverts and crown are tinged grey-brown plus fine pale spots at the tips of the greater coverts often giving the appearance of a thin wing-bar. The males sometimes have slightly more lead-grey on the head and throat whereas juveniles are browner and boldly streaked particularly on the head and neck. 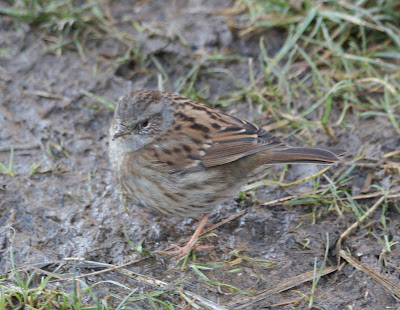 This very common but quiet and unobtrusive bird is often overlooked as it creeps along the edge of a flower bed or near to a bush, moving with a rather nervous, shuffling gait, often flicking its wings as it goes. When two rival males come together they become animated with lots of wing-flicking and loud calling. The main call is a shrill, persistent "tseep", which often betrays its otherwise inconspicuous presence.The song is thin and tinkling and often described as being similar to a squeaky trolley wheel. 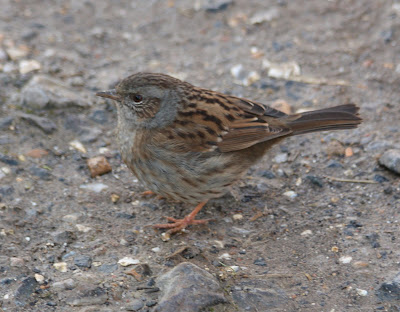 Some years ago during a walk with Dominic Couzens he explained the spicy sex life of the Dunnock (Hedge Accentor) that only came to light in the 1980's thanks to the hard work of Nick Davies working in the Cambridge Botanical Gardens. On our subsequent meetings Dominic has often challenged me to repeat the amazingly complex pattern of social and breeding behaviour, which he so eloquently describes in his book "Birds - A Complete Guide to all British & European Species". So here goes....... 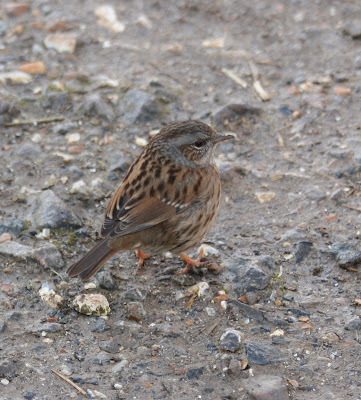 Dunnock breeding behaviour has evolved into an amazing melange of systems, with them exhibiting monogamy, polygyny, polyandry and polygynandry, and any individual may embark any one of these possibilities during the breeding season, sometimes even changing its arrangements in between broods. Firstly it is important to understand that there are usually fewer females than males so it is the females that skirmish over territories in the spring and once border disputes are settled the occupiers make it known that the services of the males are required. The feminine territories are generally larger than most males can cope with so males have to enlist the help of another to keep the boundaries safe - the two may share singing posts and give the impression of teamwork. However, they are actually in competition for the females favours and an awkward hierarchy develops with one male nominally dominant (alpha-male) over the subordinate (beta-male) but the female takes no notice of this and is more than willing to copulate with the beta-male (behind the back of the alpha-male) because the males fathering a brood sign a contract to provide parental care in proportion to their mating success. In this polyandrous trio, three birds contribute to feeding the young.

Sometimes, a male comes along that is somewhat superior, and finds it easy to defend two female territories and therefore gains exclusive paternity rights in this polygynous trio. However, if he bites of more than he can handle and reluctantly recruits another male to help so we now have two males sharing the defence of two female territories or they may collectively be sharing the defence of three female territories - this is were it gets complicated and polygynandry enters the scene! Males try to ensure their paternity during courtship by pecking at the cloaca of the female to stimulate her to eject the sperm of other males with whom the female has recently mated. 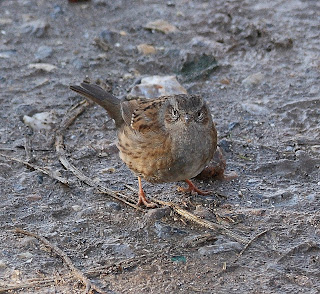 Not sure who's giving who the eye!

Email ThisBlogThis!Share to TwitterShare to FacebookShare to Pinterest
Labels: Dunnock