In a previous post 'New Life on the Ponds' I mentioned finding a male Mandarin Duck but due to the distance between me and the subject (80- 100 yards) I couldn’t get a decent close image using my DSLR. So here was the dilemma; whilst I was carrying my Swarovski scope and compact camera I hadn’t picked up the tripod but I did have a monopod and it was very, very windy. So in an effort to steady the ‘rig’ I plunged the foot of the monopod into the soft ground next to a tree and held the scope body against the trunk to gain some stability whilst trying to focus, keep everything absolutely still (practically impossible even using both hands) and get a decent picture. On this occasion I purposely used very little zoom on the camera and here are the results.
I must try to remember the tripod in future! 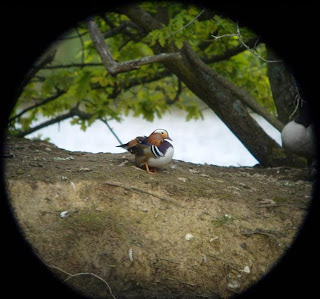 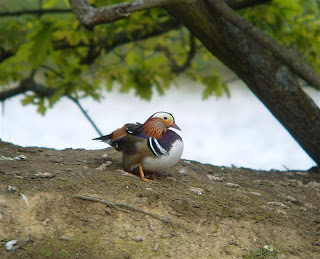 The Mandarin (Aix galericulata) is one of the most ornate of all waterfowl species, closely related to the North American Wood Duck, and has been revered in Far Eastern culture since at least the fifth century; they were thought to be monogamous, and therefore a symbol of fidelity so pairs were presented as wedding gifts to Japanese newly-weds. It was introduced at the beginning of the 20th century with the bulk of the UK feral population, estimated at 3500 breeding pairs in 1988, located in southern England. Formerly abundant, numbers of Mandarin in their native Far East have declined due to habitat destruction (mainly logging) and over-hunting to a total population size of around 80,000 birds (1970-1987). As a non-native species it is not protected in the UK. 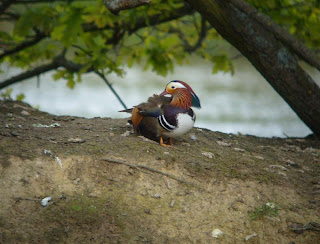 As you can see the orange head and ‘sails’ and especially the dramatic, tapering white eye-stripe makes the male unmistakable. In contrast the female is similar to female Wood Duck with grey head, pink bill and heavily spotted breast but the key field mark is the shape of the white marking around the eye that extends backwards in a long narrowing tapering line whereas in the female Wood Duck it is shorter, broader and blunter. 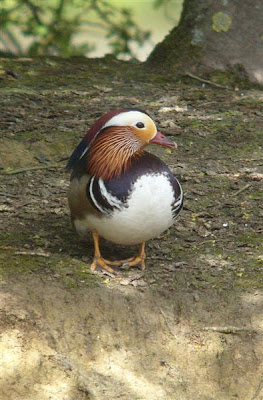 Mandarins feed by dabbling or walking on land and mainly eat plants and seeds, especially beech mast. When breeding they are a secretive species, feeding mainly near dawn or dusk, and perching in trees hanging over or nearby still or fast-flowing water during the day. Normally only one brood; a clutch size of 6 to 12, with incubation taking 28-30 days with fledging in 40-45 days. It is quite normal to see Mandarins forming small flocks in winter, but they rarely associate with other ducks.