On Sunday I only managed to get out for an hour or so, late am, as we had family guests for lunch and a holiday "pow-wow"! So a brief visit to Ashstead Common to explore a few more pathways. A lot of trees have been felled above the 'Stew Pond' car park and there was no avian activity or any discernible sounds of life. As I entered the woodland there were lots of Blue & Long-tailed Tits plus a few Great Tits and evidence of pair bonding was all around me but they certainly were not going to pose for a portrait.

Unfortunately my timing this morning was dreadful as everyone seemed to be walking their dogs. I wouldn't have minded but just as I spotted a Treecreeper and lined up the camera I was invaded by two large growling beasts. I adopted my usual 'horse whisperer' mode and the dogs changed from barking to hand licking mode and as you can guess the Treecreeper disappeared. The owners seemed absolutely oblivious to the fact that I may not wish to be disturbed in this manner and no effort to bring their charges under control! This event reminded me of another doggy encounter some years ago on Bookham Common when a large beast came bounding towards me with the obvious intent of grabbing some part of me and the owner calling out "it won't hurt you" - instantly recalling an incident when as a teenager I was delivering Sunday newspapers and a dog attempted to rip the bag from my shoulder - I adopted a very defensive posture and clearly told the owner that the dog wouldn't get the chance. Needless to say he was not very happy with my outburst but more importantly the dog also got the message. Don't get me wrong, I don't dislike dogs, if fact I grew up with one, and we have a delightful creature called 'LaLa' living next door, but I fail to comprehend why certain owners cannot keep them under control. Actually I believe it is often the owners who need training and not their pets. 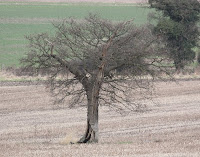 Apart from the calls of Nuthatch and drumming of a Great-spotted Woodpecker the only other sightings were two Rose-ringed Parakeets squawking their heads off atop a distant tree. On the fields behind Rushett Farm I also logged 50+ Crows plus a few Magpies and Jackdaws. Finally, I heard, but couldn't locate, a singing Skylark. (One addition to this years list at least).
So no bird photos just a few trees whose bark doesn't bite!

Email ThisBlogThis!Share to TwitterShare to FacebookShare to Pinterest
Labels: Trees