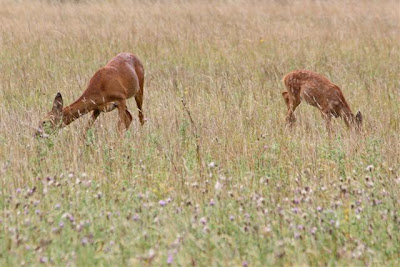 During a late morning stroll on Monday I came across a Roe Doe quietly grazing in a field with her young fawn. Fortunately the wind was in my favour (a very strong breeze from my right) and my outline was partially hidden by the field boundary vegetation so moving slowly to gain a better view I waited to see if I could obtain some clearer images. 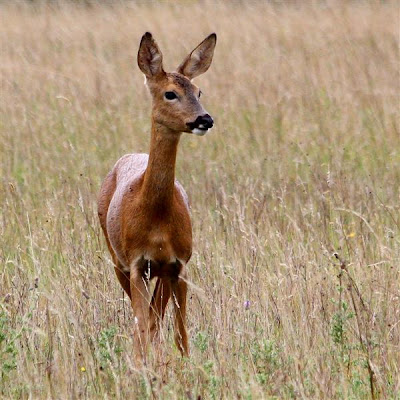 Every now and then the Doe would stop feeding, stand up and sniff the breeze, occasionally looking in the direction of the watcher but not picking up any noticeable scent she continued her feeding activity. 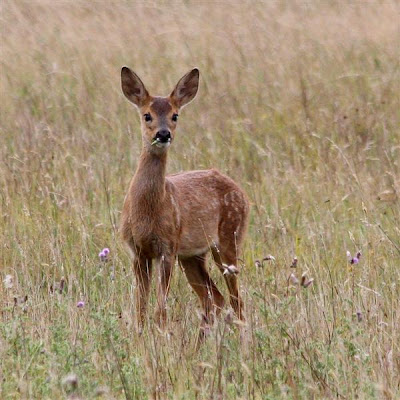 Her young fawn copied the mother and also peered towards the watcher but was also unfazed by any slight movement the watcher made to get a clearer view. 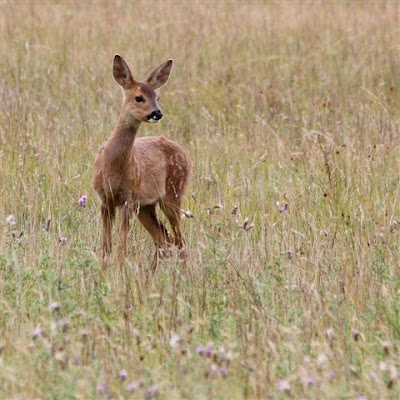 Roe Deer (Capreolus capreolus), also known as the Western Roe Deer or chevreuil, is an Eurasian species of deer and are native to Britain, having been present since before the Mesolithic period. Forest clearance and over-hunting led to roe deer becoming extinct in England by 1800 but following several reintroductions during Victorian times their subsequent, natural spread aided by an increase in woodland and forest planting in the 20th century has meant that roe deer have become widespread and very abundant today. They are small and elegant; easily identified by their white rump patch with short tush in females; a black nose, white chin plus their bounding gait when alarmed.
The rut takes place in late July or early August. The females are monoestrous and after delayed implantation usually give birth the following June, after a ten-month gestation period, typically to two spotted fawns of opposite sexes.