It is said that "only mad dogs and Englishmen go out in the midday sun", well I headed out to my usual lowland heath site in the hope of finding some 'dragons'. The sun was slowly climbing towards its zenith and with a very strong breeze blowing I soon realised there would be a number of challenges; (1) finding a subject that was perched; (2) keeping the camera steady as I had left the tripod at home to reduce weight! and (3) camera settings [something that is still very hit and miss for me] to compensate for the strong, glaring sunlight bouncing off the boggy water with the subjects often well below my feet.
My first sighting was a flying male Emperor Dragonfly for which I still need a decent image but it never rested and with the sun shining in my face focusing was near impossible and all attempted flight shots went straight in the bin. I then spotted a female drop down onto the surface of the small pool and start ovipositing. 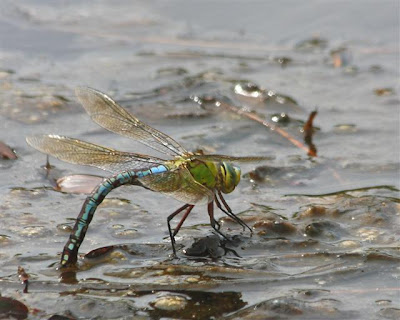 I tried a number of settings and this was the best of the bunch.
"Patience is a virtue" rang in my ears so I decided to take a stroll to a wooded area on another part of the common and return to the acidic boggy pools when the sun and my subjects would hopefully be in a better position. The shade of the leafy canopy had a calming and cooling effect as I listened to the sounds of calling Wren, Great Spotted Woodpecker, Chiffchaff and then a male Redstart flitting from tree to tree and warning its friends that an interloper had entered its territory. Chaffinches plus two young Woodlarks were also spotted feeding on the pathway way ahead of me but despite my creep quietly skills they waited until I was nearly in range before flying off! 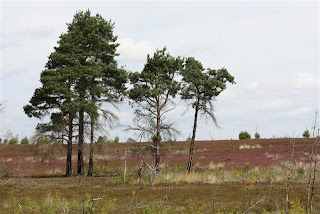 Feeling refreshed I headed out onto the sun-baked open heath and back to the boardwalk where the first sightings were good numbers of Keeled Skimmers dashing back and forth. Again patience was the name of the game...stop...sit still...watch and wait...monitor their movements and identify a likely perching position. You can view the results (previous post) in the link above.
Moving a little further along the boardwalk another species, FOUR-SPOTTED CHASERS (Libellula quadrimaculata), were also very active with a number of males patrolling their respective territories. From time to time they seek out a vantage point, on any tall marginal vegetation,  to wait for passing females or to regularly launch aggressive attacks on their rivals. 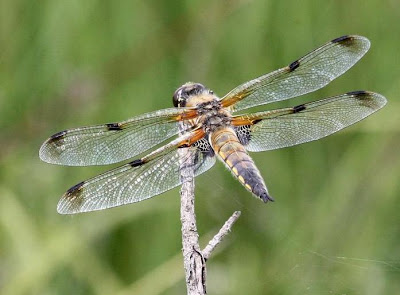 Lucky for me an immature female decided to rest awhile. 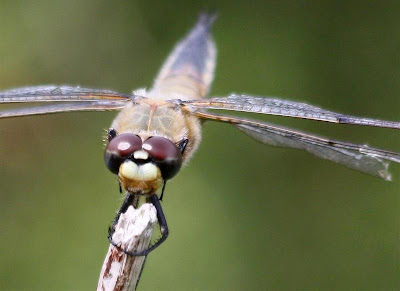 Taking a firm grip to counter the breeze! 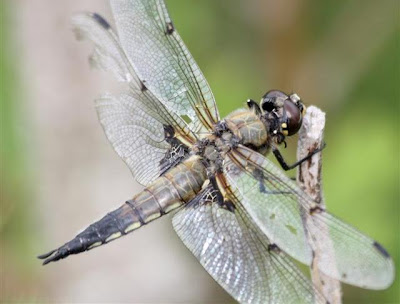 Not the composition or quality I would have wished (too much reflected glare from below so original cropped) but it does at least show the damage to this males' wings (holes and tears) from the wear and tear of attacks, during the contant territory defences, and courtship. 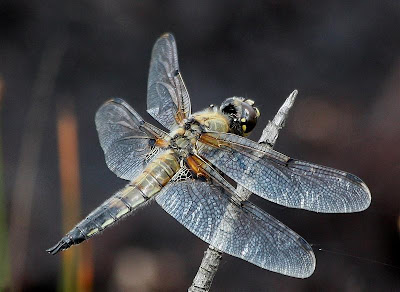 Eventually patience paid off as another male in good condition perches relatively close.
All these shots were taken with the 450D plus 70-300 zoom lens using 'Aperture Priority' and the settings ranged from F/7.1 - F/10; 1/250 - 1/320. If you have any other tips regarding settings etc. to achieve consistent quality shots then I would love to hear from you.......FAB.
Posted by FAB at 00:21