Boots are made for... 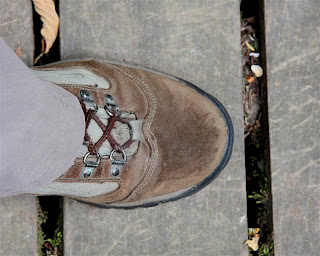 "These boots are made for walking, and that's just what they'll do".

The repeated lyrics of the well known song by Nancy Sinatra released in 1966, when I was somewhat younger, subsequently covered by many other artists including Jessica Simpson's own rewritten version. The rest of the original lyrics bear no relationship to my daily life but without boots I wouldn't have got anywhere. As a youngster I explored the local common and woodlands; as a teenager I hill-walked (often with my father in places such as the Brecon Beacons), hiked, rock scrambled and even climbed a bit with a close friend (Snowdonia, North Wales in the depths of a snow and ice filled winter was fun); I cycled a lot (even owned a tandem for a few years which won the heart of one young lady) and also canoed for a while; then car ownership enabled me to explore other parts of the UK testing the boots over mountains,  moorlands, valley floors, clifftops and beaches. In more recent times the boots now usually carry me over less treacherous terrain as I stroll here and there often stopping to watch our native wildlife or to just soak up my surroundings at a much more leisurely pace.
[You can click all the images to enlarge] 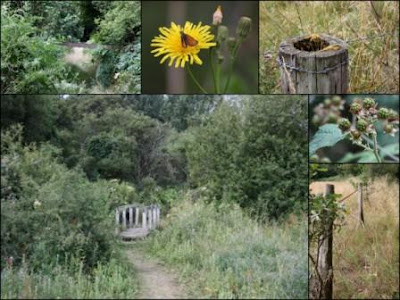 Are you ready boots? Start walkin'! ......and follow me as I tread the paths, tracks and bridleways around a very small corner of a local common. Starting from a clearing close to where Nightingales, Garden Warblers, Blackcap, Lesser Whitethroat etc. were singing a month or so ago I cross a bridge over a tiny dried out stream. A Common Whitethroat partly hidden from view warns its young that a 'watcher' is about. Tiny day flying moths flicker around my legs as my footsteps disturb the grasses; a Small Skipper rests on a Cat's-ear and the blackberries are in need of some rain to swell before ripening.....I'll be back for a taste when they are ready!
My ears as usual are  listening for any bird sounds but it is my eyes that are doing most of the work, constantly moving from right to left and back again as tiny fluttering shapes, some colourful and some drab, flit in and out of of my peripheral vision as they seek out their favourite nectar sources; chase away interlopers or hunt for a partner. On this occasion I have initially loaded the 18-75mm IS USM  lens so capturing a close up will no doubt present its own challenges. 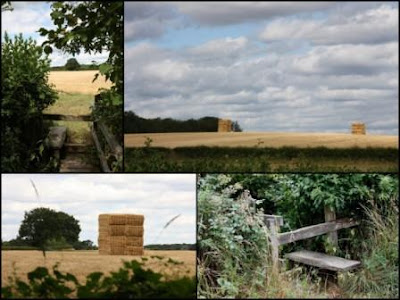 Further along a break in the hedgerow leads me over another small bridge and a style providing a view of the layered clouds above the recently cut field with all the bales neatly stacked up in box-like fashion. With nothing flying to hold my attention I return to my original route. 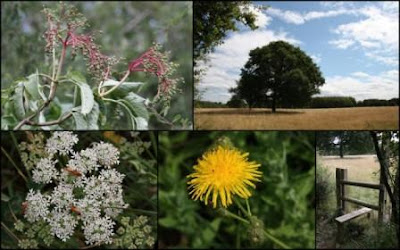 On the other side of the path another style leads into another field often frequented by Corvids and Pheasants but today it was silent with just the clouds drifting slowly overhead. The Elder berries are also looking a little limp from the lack of water and the aniseed-like fragrance of Sweet Cicely drifted to my nose on the slight breeze. The flower head was littered with Soldier Beetles and various other flies and tiny insects. 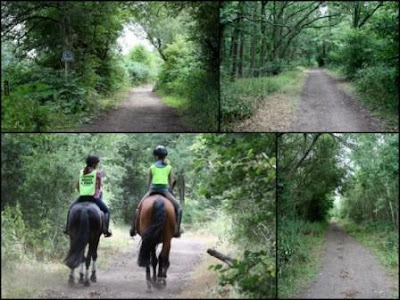 Following tracks thankfully providing shade from the overhead sun it was generally very quiet apart from the constant mewing 'piiyay..piiyay' call from a Common Buzzard not too far away and the pleasant interuption as two chatty ladies passed by gently exercising their mounts. In fact my pace was so leisurely that they passed me by twice during their circuit! Close to the spot with the sign I heard a few bird sounds and then saw Treecreeper, Nuthatch, Blue, Coal, Great and Long Tailed Tits, Robin, Dunnock, Blackbird, a young Chiffchaff and very fleeting glimpses of a Goldcrest. They were all grabbing a quick meal from amoungst the dense foliage and then flew on ahead much faster than my footsteps so I turned and retraced my steps between the hedge lined fields. 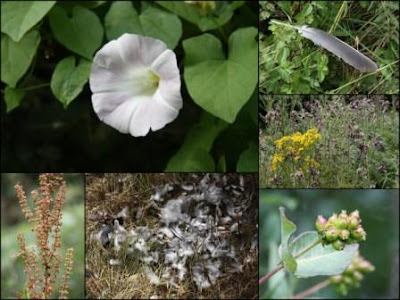 The hedgerows were full of Bindweed, their white and some pinkish tinged trumpets glowing like light bulbs inbetween the dark green leaves; a lonely fallen feather shed by its owner; plenty of colours other than green with blue, purple, yellow and reddish-browns provided by Bugle, Vetches, Clover, Grasses, Sorrel, Thistles and Ragwort; the Honeysuckle has already lost its flowers plus on the floor the recent remains of a very well plucked Woodpigeon.....someone had a good feast! 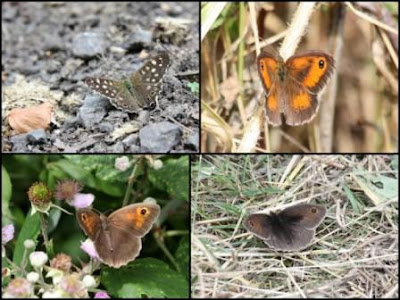 Back out in the sunshine again I finally switched over to the 70-300mm lens. There was still a slight breeze and more butterflies were on the wing but fortunately some were resting briefly to catch the suns rays including (clockwise from top left) Speckled Wood, Gatekeeper, Ringlet and  a Meadow Brown. 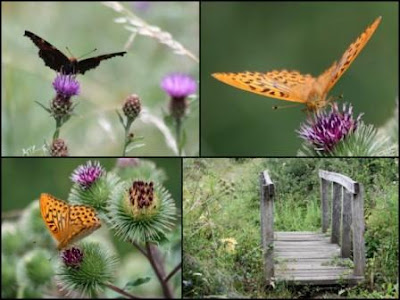 After two hours or so the boots are back at the bridge where a Peacock (the dark under wing shot made it look a bit like a bat) and several bright male Silver-washed Fritillary are enjoying an afternoon feast on the thistles and knapweed. I also had fleeting views of a fast flicking Common Blue, a lazy Brimstone plus a high flying White Admiral bringing the total count to 12 species of butterflies. Once again the boots have served me well and as I drive away the sweet call of a Yellowhammer rings out from the other side of the roadside hedge suggesting it's time for a 'little bit of bread and no cheese' so I head home for a well earned sandwich and a cuppa.

I make no apologies for the length of this post but do hope you will join me again sometime when the boots go walkin....FAB.
Posted by FAB at 22:14