Run out to Waltham Brooks.

Well I think I have tamed the 'poltergeist' (thanks Warren). Battery recharged yesterday and then reconnected this morning. After resetting the clock and date I took A's vehicle for a short drive but during this journey the radio which had been switched off again restarted automatically and the display said "No CD" so when I got home I inserted a music CD and everything worked AND the radio has stayed off when the car was put to sleep....Success at last, I hope.

At A's suggestion we decided to take the car for a much longer run this afternoon and headed south into West Sussex. We eventually stopped at Coldwaltham and navigated a very wet and muddy circular walk around Waltham Brooks starting and finishing near Greatham Bridge. I was hopeful of showing A a Barn Owl but perhaps we were a little early. We did however see a few perched Stonechats, Blackbird and Wren; a Snipe being closely followed by what looked like a Crow!; on the flooded marsh next to the River Arun were Mute Swan, Mallard, Teal, Wigeon, Shoveller, Gadwall and Tufted Duck; and along the roadside a party of Goldfinches.  Below are a few pics taken in very poor light. (You can click to enlarge if you wish). 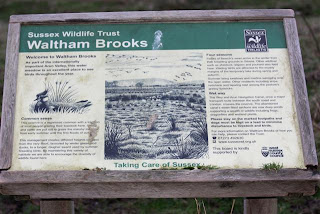 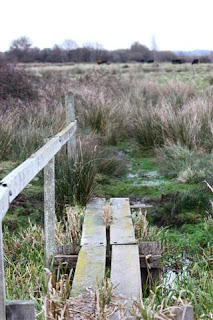 We should have packed the 'wellies'! 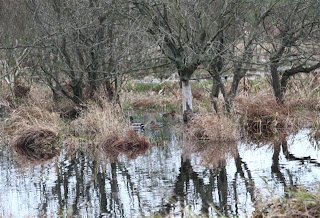 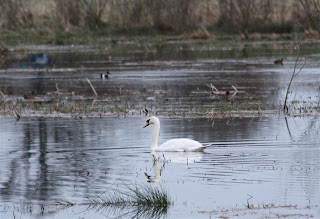 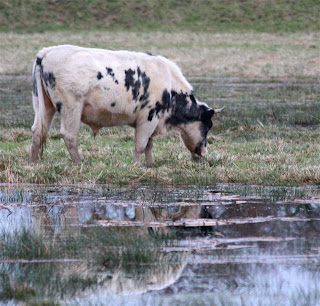 One of the many grazing Cows. 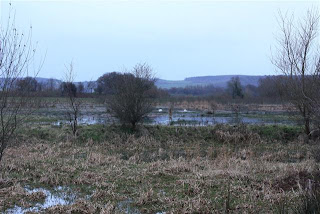 We hit the forcated rain on the way home and finished off with a local take away fish and chips.  FAB