Today David mentioned that he had seen a Nuthatch nest building in one of the trees on his way into work so immediately after work we walked to the location to see if there was any activity. After a few minutes the male appeared with more nesting material and disappeared into the large hole in the branch. I only had my pocket digi camera so in the next shot you just make out his head in the entrance hole. 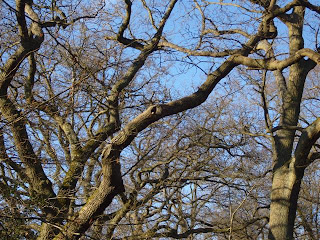 I then had an inspiration...I have my bins with me so how about attempting to get a shot by holding the camera to one of the eyepieces! Not an easy task even to locate the right part of the branch and keep everything relatively still (using both hands) while waiting for my quarry to reappear but here is the slightly cropped image with one of the pair [drat...out of focus!] perched on top of the branch. 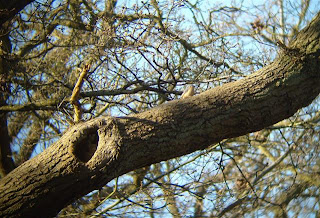 Over the next few days, time permitting, I will attempt to see if I can get some better pics, but don't hold your breath!
Posted by FAB at 23:05

Email ThisBlogThis!Share to TwitterShare to FacebookShare to Pinterest
Labels: Nuthatch