A better way to start the day?

On Tuesday with an aching back due to incorrectly lifting and moving a pot in the garden over the weekend (no comments please, it’s my own fault!) I decided to leave early for work and dropped into Bookham Common to stretch the legs. The early morning sun was still hidden behind cloud so not brilliant light for any pictures but I took the camera just in case. While heading towards the Blackthorn thickets four Jays noisily flew over and the other sounds were from a Robin high on his song perch confirming his overnight survival, a Greenfinch ‘sneezing', and a Blackcap started warbling very close by. Could I get a shot as I crept around the thicket? No he was deep in the shade and responded to my presence by flying away. Next on the list was Chiffchaff and while thinking about a possible photo my attention was broken by the scolding call of, did I hear correctly, yes, a Common Whitethroat [first for the year]. Again I crept closer and closer as it tantalisingly moved ahead of me through an area of brambles providing brief glimpses but never still enough for a photo. 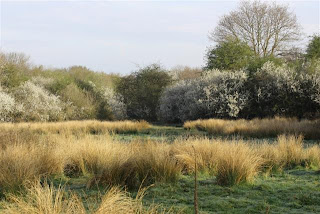 My next encounter was with a dog walker who I have chatted to on many occasions but still don’t know his name (must ask next time). This gentleman does not consider himself as a ‘bird watcher’ but carries his bins and usually tells me what he thinks he has seen or heard. Today was no exception. Apparently shortly after our last encounter in late February when we discussed the recent sightings of Hawfinches behind the station he actually saw one for the first time just yards away from his parked car and 10 minutes after I had driven away. Did I feel “gripped off” – not really, life’s too short and there is always another year! The other important bit of information he imparted was a definite sighting of Cuckoo on 4th April so my ears did not deceive me when I thought I had heard a brief call during a visit last week. I’ll be keeping an eye on the usual song posts to confirm the Cuckoo’s presence.
After we parted I saw both Blackbird and Wren in full song plus a Willow Warbler repeating it’s wistfully descending call from a very tall birch and definitely too high for a photo call. Just about to return to the car and the beautiful repeated phrases from of a Song Thrush caught my attention. I stealthily moved closer and closer to his high perch and whilst partially obscured by branches I finally managed one half decent shot. 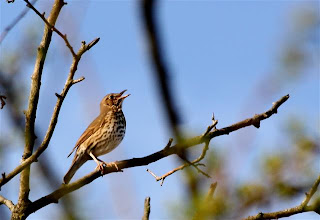 With his repetitive phrases changing I started to pack up just as a lady dog walker passed me by and said “Is there a better way to start the day?” As I acknowledged her comment the Song Thrush departed for another song post and I headed to work quietly recalling all the sounds I had heard and knowing that for “The Early Birder” this is the best way to start any day.
Posted by FAB at 22:04