Chance Encounter with a Roe Buck

Last week I made a late afternoon visit to Epsom Common in the vain hope of finding a confiding bird to photograph. Well I actually heard more than I saw including Chiffchaffs, Blackcap, Song Thrush, Blackbird, Jays and the resident Crows plus a few Magpies. As I walked beyond the Great Pond out onto High Meadow (open grassland with some scrub thickets) heading for the sounds of Common Whitethroat I had a feeling that something was watching the ‘watcher’ as the hairs on the back of my neck pricked into my shirt collar.
The ‘watcher’ stopped and slowly turned to his right to find a young Roe buck, sporting his fresh soft velvet antlers, staring straight at him. There was no perceivable movement from the watched who continued to stare and the ‘watcher’ tried to remain calm as his pulse rate quickened. Both the watched and the ‘watcher’ seemed to be transfixed in a moment in time. The ‘watcher’ very cautiously removed his camera from its holster, still no change in attitude by the watched, and with a light breeze in favour of the ‘watcher’ the camera was lifted to shooting position and a few shots were fired. A slight twitch by the watched as he ‘nosed’ the air to capture any smell of the ‘watcher’ but still all four feet were rooted to the spot. The ‘watcher’ fired two more volleys and while checking the results the watched started to move, very slowly, away just a matter of a yard or two revealing his tailless rear and then stopped and turned his head towards the ‘watcher’. The eyes of the watched and the ‘watcher’ briefly met once more and as the ‘watcher’ fired his final salvo the watched moved slowly away totally unharmed by this chance encounter. 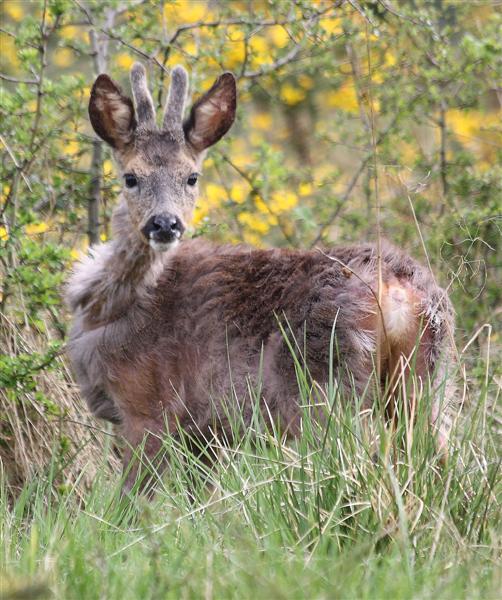 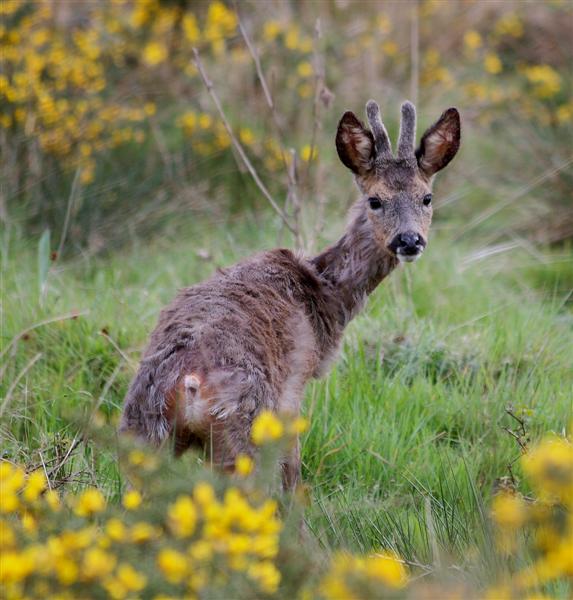 The grey-brown winter coat (grown during Sept to Oct) is moulted the following spring and will ultimately turn a foxy-red with a distinctive buff patch on the rump during the coming weeks.
Posted by FAB at 22:22