My initial plan to rise early and get into work before anyone was around to photograph the Nuthatches was thwarted first by ignoring the alarm and second by the weather, drab, overcast & windy! So I decided instead to stop by at Epsom Common Pond for a short walk. Around the car park many species were singing and I had sightings of Dunnock (3) feeding along the paths, a pair of Blue Tits in courtship flight, Long-tailed Tits (min 6) frantically feeding together with a Coal Tit, Nuthatch carrying a leaf (obviously nest building) but couldn’t locate his new domain, Blackbird & Chiffchaffs in full song. Just over the fence in the top horse paddock there was a Song Thrush and Redwing (2) feeding until they felt my presence! Jackdaws were noisily flying overhead with a few Carrion Crows for company. At the Great Pond there were at least 8 Canada Geese (all paired up), Mallards, Moorhen and one Cormorant on his usual perch. Despite the poor light conditions I attempted a few photos BUT for some reason they are not as sharp as I had hoped – I’m not sure I was firing on all cylinders this morning. Anyway here are two of the snaps. 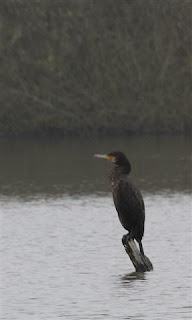 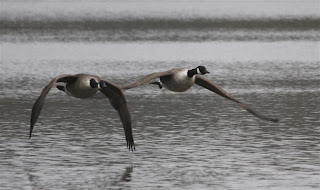 At lunchtime after diving into the box to replenish my reserves (including a chocolate fix) I briefly visited the Nuthatch site as the sun was shining to see if there was any activity. I only had 10 minutes to spare and the male visited just once before being called away by his mate. I managed a very quick shot but again I am not happy with the poor focus on the subject but here it is anyway. 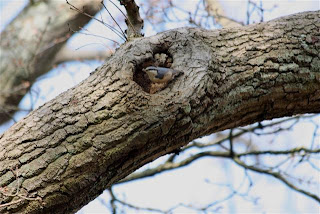 P.S. I've just had a call from a very old friend who is making a brief annual spring visit to the UK and we will be birding together at Farlington Marshes on Sunday so lets hope the weather is on our side.
Posted by FAB at 21:30