The participants congregated in the gardens and as usual there were many ‘regular’ faces who have over the years have become, in their words, our birding ‘groupies’ but also very good friends. While I was taking this picture three House Martins were spotted high in the sky, but not by me – drat! [But I saw two today Tuesday - another year tick]

So after introductions I led off towards the Wild Garden with David taking up the rear as usual. A Greenfinch confidingly perched on top of a nearby conifer and a male Blackbird was scouring the well trimmed lawn for worms, its favourite snack. Way in front of us on the path alongside the stream, below the Rock Garden was a waddling male Mallard and a Moorhen while one of the visitors located a Long-tailed Tit in the Oak tree. A Wren exploded into song from the undergrowth nearby. It never ceases to amaze me that its song comprises of around 70 – 100 individual notes and are blurted out in a matter of seconds. Next a pair of Dunnock were feeding either side of a pathway but quickly disturbed by other garden visitors walking towards us. Around the corner is one of the large garden seed feeders and everyone had exceptionally good views of a Great Spotted Woodpecker on the feeder together with a Rose-ringed Parakeet while both Chaffinch and Blue Tit tried to land on the perching rings but obviously thought better of it. 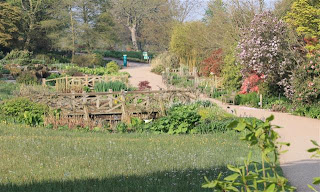 As we entered the Wild Garden the most prominent sound was “chiff, chiff, chaff...chiff, chaff, etc.” and its owner a Chiffchaff was singing from atop one of the highest Oaks. Question from a lady participant...”Why do they sing”? Immediate response from The Early Birder was “I’ve survived the night, I’m fit, healthy and I’m up for it”. After the few giggles subsided I explained in a little more depth the basic reasons for bird song and that we should also listen out for other sounds such as alarm and contact calls just as a male Blackbird uttered a scolding warning and flew past us. My attention was interrupted by a call of “raptor overhead” by David so bins skyward and a brief look at a Common Buzzard as it flew over at some speed and probably not seen by many of our party. Well David did say at the start of the walk “Don’t forget to keep an eye on the sky above us as anything could fly over”, a very basic birding tip. 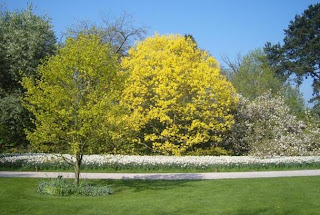 Out on the edge of the large grassy area of Seven Acres we had a close visit by a Pied Wagtail hunting for insects on the lawn. The next songster spotted, again high in a tree, was a Mistle Thrush but clear views obscured by the emerging foliage. This thrush often sings ahead of bad weather and has earned the name ‘Storm Cock’ but today the sky was clear although it was chilly out of the sun. David and I had both heard a Blackcap singing (another migrant visitor, although many no longer return to Africa at the end of summer but overwinter in the south of the UK) but the question was could we find it. I’ve never found it easy to explain its song a rich fluty warble with a noticeably mumbling, uncertain, hesitant beginning and a strong whistling finish. The song is very variable and may include imitations including that of a Garden Warbler with which it is often confused. Every time it started to sing I pointed in the general direction but this warbler usually delivers its song from a concealed perch between 4 – 13 m above ground and we followed this individual as it moved through the shrubbery for some 10 minutes without success.
At the side of the lake we were closely inspected by female Mallards looking for a free hand out while we marvelled at the iridescent colours on the heads of the males. An Egyptian Goose was also present. 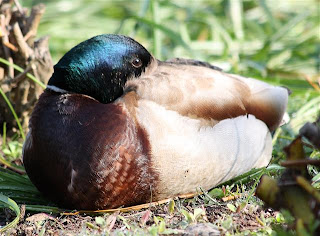 Moving on to the path overlooking the River Wey near the Pump House we were delighted to locate a Grey Wagtail, constantly twitching its tail while striding along a small sandy area on the opposite bank and then flying to a tree stump perch further downstream. Many of our regulars have been fortunate to see Kingfisher at this location on previous walks as they have nested in the river bank over many years. However a lot of work has recently been carried out to on the far bank (Golf Course) to repair and prevent erosion so we think the Kingfishers have probably sought out a quieter location for this year but there is always the possibility that you will see them fly by – just listen for their high pitch whistle. [Tuesday update - I saw Kingfisher flying up river today so we will have to keep an eye open to see if they are nesting again]. 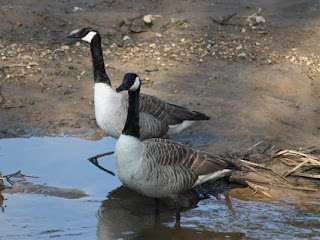 Great Tits were also seen carrying nesting material as we waited for any other activity. 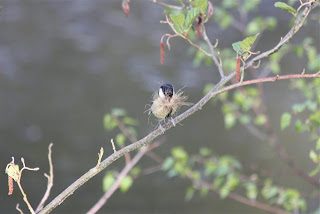 The next sightings were a Goldcrest and a pair of Jays while David located a Treecreeper. I eventually got most of the group onto it as it flew to its nest entrance just under the bark of a Pinus radiata and only 6 feet from the base of the tree.

Sorry the bird disappeared into the nest and didn't reappear for his photo call!

Our attention was interrupted by another sighting of Buzzard flying overhead. Two Canada Geese flew over onto the Golf Course. A splinter group were looking over the river where a tree has fallen into the water and requested my ID for a ‘dumpy’ wader they had spotted that was constantly bobbing its rear end. (I was not surprised that they had found something interesting as David had acquainted me with his sighting on his walk into work.) Working its way around the fallen branches on a tiny sand bank and often partly hidden from view, was a COMMON SANDPIPER, easily identified by the clear border between a white belly and grey-brown chest, and a white extension that reaches up to the shoulder that looks like a ‘comma’. This individual is on migration and after feeding up on insects will continue its journey probably northwards. The Grey Wagtail came and joined the Sandpiper while a Moorhen was calmly sitting on a nest where the tip of the fallen branches entered the water. 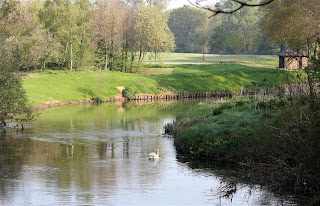 As we continued towards the ‘Wildlife Area’ some of the party caught sight of a Grey Heron in flight. We spent a little while looking into this protected area where the river has created a natural pool often frequented by Kingfisher and a bird hide is to be built this year mainly for educational use by children. As we entered the ‘Wildlife Area’ attention was drawn to the Owl box high up on a Pine that for some time has been occupied by Grey Squirrels but has now been cleaned out. Could it be used by something else, well something shot over us and our thoughts were probably a Kestrel. [It was later confirmed by garden staff that a pair of Kestrels have been seen prospecting this box – good news indeed.] Once again intermittent bird song from Robin, Wren and another Blackcap but nothing actually seen apart from Starling and then a Mute Swan on another sand bar in the river as we exited this reserve area. 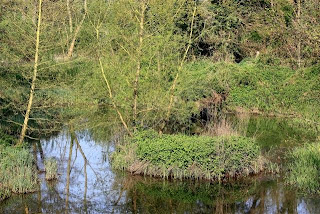 This is the view that you will have from the hide - when it is built.
On the walk back through Howards Field (heather collection) and Pineatum we heard both Green and Great Spotted Woodpeckers calling. All in all not a bad day and it will be interesting to compare the species seen and heard (35) with our next walk in a month’s time.