Farlington Marshes is 125 hectares (308 acres) of grazing marsh on the northern shore of Langstone Harbour reclaimed in the late 1700s. Most of the site lies below mean high water level protected by a sea wall embankment on three sides. The M27 provides the ‘noisy’ northern boundary. Parts of the site were used by the military during both World Wars, with munitions disposal resulting in several of the smaller pits and pools. With good views over Langstone Harbour, including various shingle islands, the marsh is well placed to attract waders and shore birds at high tide and is an internationally important site for wintering Brent Geese & Black-tailed Godwit plus a breeding site for Redshank, Lapwing & Skylark in the summer.Normally I would recommend visiting at least 2 hours before high tide in order to watch the tide push waders and wildfowl feeding on the mudflats towards and onto the marsh BUT today high tide was around 8 a.m. and I had arranged to meet Barry at 9 a.m. as we both had a at least a one and a half hour car journey. So this is the view that greeted us: 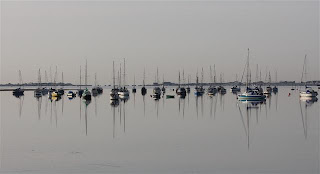 After briefly catching up on Barry’s birding exploits in Tenerife and Canada we headed along the embankment towards the ‘The Lake’ and saw Dunnock, Greenfinches, Goldfinch and Robin. The only occupants on the harbour water were Black-headed Gulls and a single Mallard.
The Lake which is bounded by extensive reed beds initially appeared very quiet and devoid of activity – most unusual at high tide. We did locate a reasonable flock of Black-tailed Godwits, (many sporting their brick-red breeding colours), Common Snipe, Common Redshanks, Ringed Plover, Teal, Gadwall, Coot, Moorhen plus Little Egrets, Lapwing, Crows, Starling and a Great Black-backed Gull flying above the grazing marsh. A pair of Reed Buntings darted past and disappeared into the reeds. 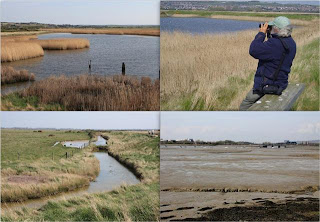 Following the path towards the stream, which is the ‘main drain’ of the site we sighted our first Chiffchaff and heard our first Cetti’s Warbler of the day. To the north-west of the stream is an area known as The Bushes, containing Hawthorn & Bramble, an excellent location for both resident breeding species and migrants finding landfall in the spring. Here we heard and saw 2 male Blackcaps, a single Willow Warbler, more Greenfinches, Wrens exploding into song, Great & Blue Tits plus a possible Whitethroat (but not confirmed due to the very brief flight sighting!) Woodpigeons and Magpie were also in evidence. The Stream contained more Black-tailed Godwits, Mute Swan, Mallard and Teal. We both spotted a Buzzard type, initially being mobbed by Crows, and then it landed on a post at some considerable distance behind the reed bed. We both questioned our original ID as it had a longish tail and the head shape was smaller than Common Buzzard. Eventually we decided upon a female sub-adult Marsh Harrier. A few moments later we located a Common Buzzard soaring north-east high over the M27.
Further along the stream path we encountered some other birders with whom we passed a few words and they indicated that they had seen a Honey Buzzard so was our ID of the Harrier correct / incorrect? [Barry seemed fairly certain when he referred to my Collins Field Guide later on].

After checking out the sightings board at the Information Point we saw Meadow Pipits and made a detour north under the M27 to an area with ponds, fen vegetation and brambles plus small grazed fields and hawthorn scrub known as the Old Copse. Traffic noise from the M27 was deafening but we did hear another very loud Cetti’s Warbler and anther Chiffchaff was located singing from a high tree perch but still no evidence of Water Rail.
Returning to the marshes we watched Skylarks in full song flight and on the ground but no sightings of any Wagtails or Wheatears (the early arrivals had obviously moved on!) Canada Geese and still a few Brent Geese were on the grazing fields. Small no’s of Linnets flew by plus a single Chaffinch. We stopped at ‘The Deeps’ for our lunch break. Here we added Shelduck, Shoveller, Tufted Duck, Little Grebe, Oystercatcher, more Redshank, Grey Heron with Curlews feeding out on the mudflats with the tide receding. A pair of Cormorants and a Herring Gull flew over. We walked through Point Field but only saw Carrion Crow. 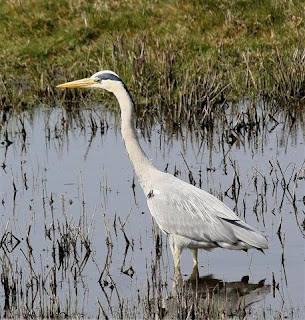 Back at The Lake there was nothing new and still no sightings of expected waders such as Dunlin, Plover or Turnstones – so where were they – probably further out on the shingle islands in the harbour. 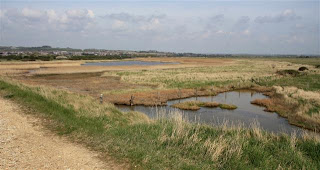 All in all a very pleasant outing in good company, thanks Barry...hope to see you next time you visit the UK.
Posted by FAB at 23:35