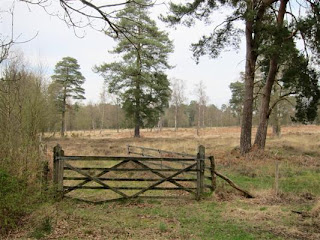 Wednesdays are the usual day each week that I drive the 50 minutes south-westwards to the Surrey-Hampshire-West Sussex borders to visit my parents. Talking to my mother the evening before she indicated that they had a few tiring days and there were a few gardening jobs on the 'to do list'. With her approval I indicated that I might stop off at Witley Common for, no guesses, a bit of wildlife watching.
After parking roadside I had a quick scan over the normal area that I walk but neither saw or heard any birdsong so decided to venture onto another part of the heathland on the other side of the road.

My route took me steadily uphill on an open track bordered by heather and a few Birch trees which hindered my view over the heath. Once again all seemed extremely quiet until I heard the distinctive loud call of Cuculus canorus (click below to listen) which sounded as if the vocalist was fairly close but out of view.

Using the foliage of the Birch as a screen I peered uphill and located my quarry and just manged two shots on auto setting before it decided to fly away probably to another favoured distant song post way out of sight. 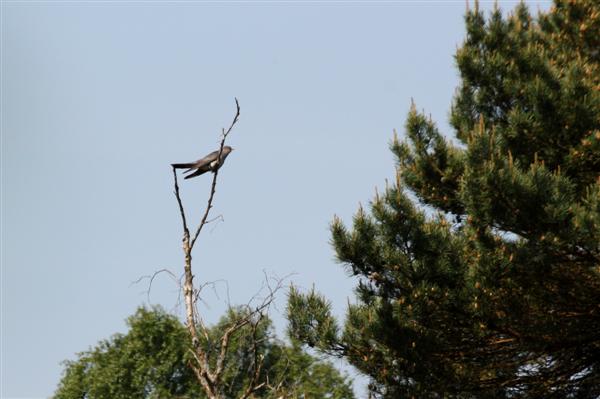 Of course many will instantly ID this species just by its call but if you are any doubt then the way it perches with its wings hanging below its tail is also very diagnostic. In flight a Cuckoo can easily be mistaken for a raptor and I will freely admit that I have made that mistake on a few occasions while leading a bird walk! Having said that, in flight, the wings rarely lift above the horizontal plane so that is one method of distinguishing it from other similar flying species. Below is a cropped view of this long distant migrant that visits the UK to breed by brood parasitism of various species from its wintering grounds south of the Sahara Desert in Africa. 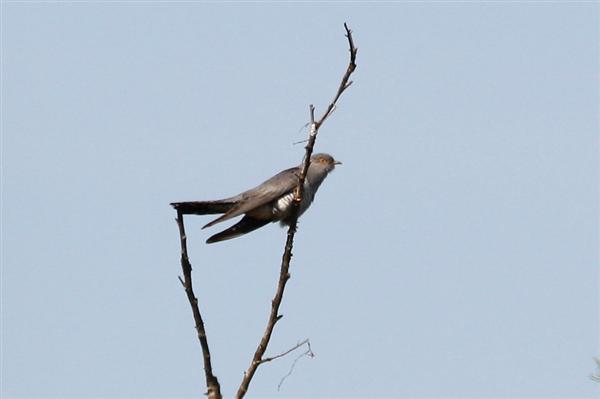 In my formative years this species was very common but Cuckoo numbers in the UK have been in serious decline since the early 1980's with a drop of 63% in England which is much greater than in Scotland or Wales. In order to understand the possible reasons the BTO (British Trust for Ornithology) started the Cuckoo Project (click the link for more information) and the development of 5g tags is now enabling them to understand more about their migratory routes and the problems they may encounter. Of course there are many other factors, including the dramatic changes to our Spring and Summer weather patterns, affecting both the Cuckoo's breeding rates as well as many of our other smaller migrant birds that also winter in Africa. More individuals have been tagged this year so hopefully in time the increased data will assist this important research but of course we can't change what mother nature chooses to throw at them.  FAB.
Posted by FAB at 06:00