Birding Day in Suffolk and Norfolk.

On Friday I left home in the wee small hours and at 5am met up with six other birders at RSPB Lakenheath in Suffolk. The site has been playing host recently to rare birds such as Savi's Warbler and Red-footed Falcon and is probably the only regular breeding location in the UK for the 'RED listed' Golden Oriole plus home of the Common Crane that first bred there in 2007. Indications were that the first two species had not been recently sighted and although a pair of Golden Orioles were around they can be notoriously difficult to locate once they start the breeding process. 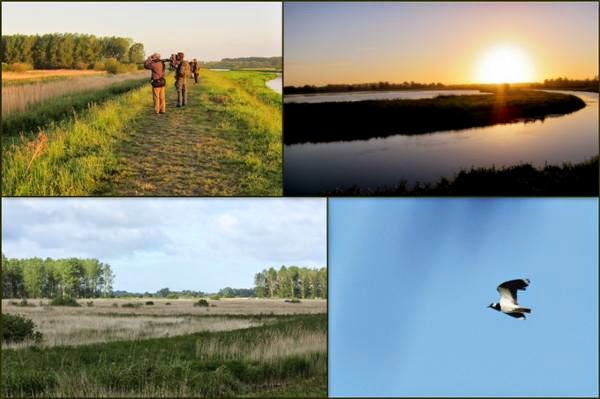 With the light slowly improving and a very chilling strong breeze we started our circuit of the reserve at the viewpoint overlooking 'The Flash' with overflying views of Lapwing, Curlew and a close quartering Barn Owl carrying its prey. The reed beds were full of the rhythmic and scratchy songs of Reed and Sedge Warbler respectively plus the distinctive reeling of Grasshopper Warbler interspersed by the occasional but sudden loud outburst from Cetti's Warbler and Wren. 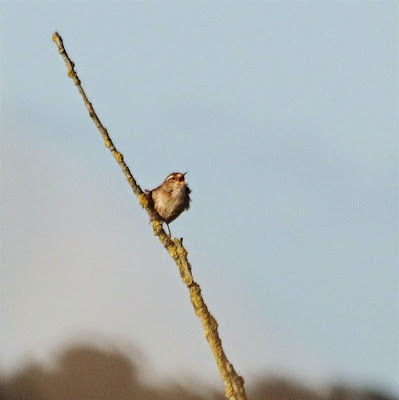 
Throughout our time here Cuckoo's called constantly from their lofty perches and several were seen in flight. (I subsequently learnt that there are probably five males but only one female. Even so they have plenty of their favoured host species available, the Reed Warbler, to ensure a successful breeding season.) At every opportunity we scanned likely locations but I only heard the flutty call of a Golden Oriole on two separate occasions. Bittern was heard 'booming' and Marsh Harriers were regularly on the wing hunting with plenty of Swifts screaming overhead but very few Swallows. I found it difficult to pick up the twanging calls of Bearded Reedling but several were seen briefly skipping over the top of the reeds. A pair of Egyptian Geese and a single Common Tern flew along the river while a scan of the fields way beyond produced two resident Common Cranes. 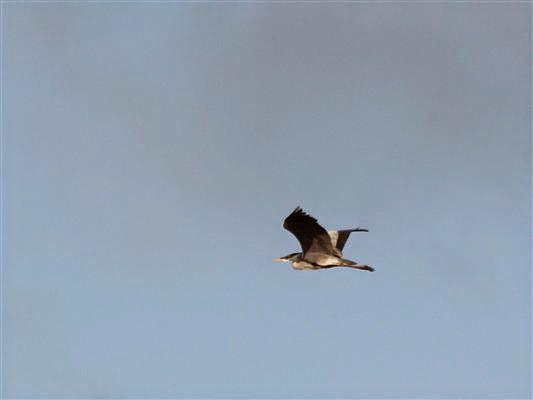 
After leaving Lakenheath we visited a 'likely' road-side area (according to a reliable source)  barricaded with electric fencing for Stone Curlew but couldn't locate anything apart from Hares and Rabbits so we stopped at Brandon for a hearty full english breakfast before popping into Weeting Heath. We were only just in time to log two adults and one chick before three reserve staff walked out onto the breeding area to ring the chicks. (You would have thought they could plan this sort of activity before the reserve was open to the public ... AND they actually walked straight past one chick and of course the adults took flight!) As the adults probably wouldn't resettle for some time the decision was made to drive northwards to Cley Marshes for probable Pectoral Sandpiper, Spoonbill and a male White-spotted Bluethroat although some doubt existed as to if the latter was still around. (Needless to say we didn't see it ... that would have been a lifer for me.) 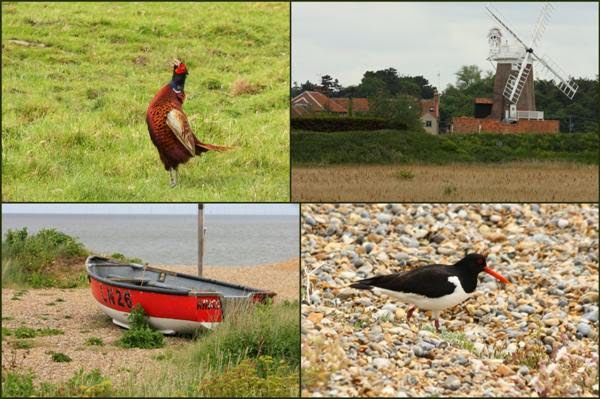 After a caffeine fix we headed out onto the East Bank and located a Spotted Redshank, Dunlin, Black-tailed Godwits and then a single Pectoral Sandpiper skulking in the grass fringes of one of the pools. From the shingle ridge we added Sandwich and Little Tern over the sea. 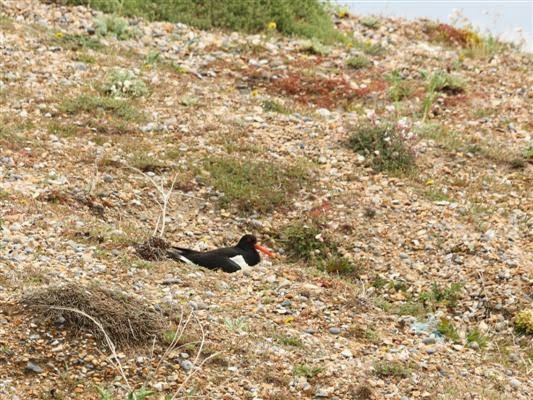 Oystercatcher nesting on the landward side of the shingle ridge that protects the reserve from the sea. It was interesting to note the increase in vegetation around this spot that was marked out to protect the nest site which in normal circumstance would have born the brunt of thousands of human footsteps. 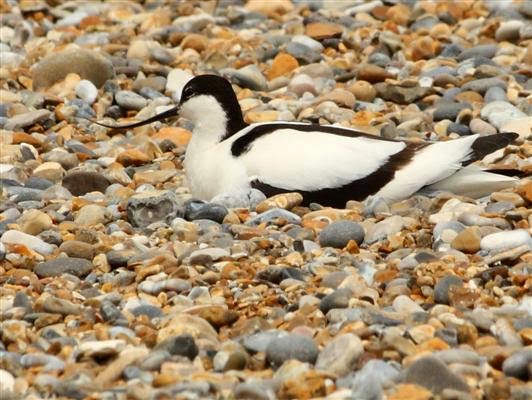 A little further on an Avocet had also decided that this was a good place to nest.

From the North Hide we confirmed our earlier distant scoped views of a sleeping Spoonbill, another Spotted Redshank, Ringed Plaver and a Little Stint plus a flyby Mediterranean Gull. Unfortunately the rest of my 'day companions' had to return home to Surrey at lot earlier than originally planned so I spent a while in one of the hides watching the numerous Avocets with their chicks and the hiatus caused when a Marsh Harrier drifted over their territories and snatched a meal. 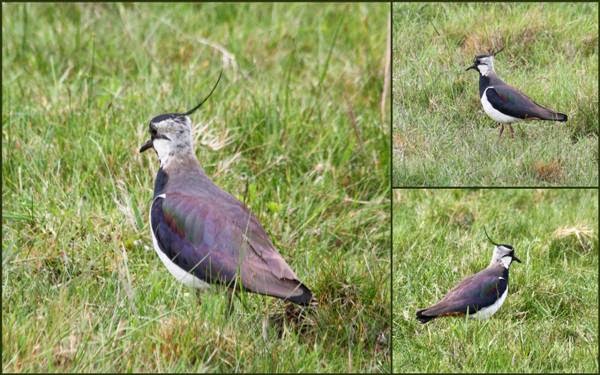 Outside the hide in a nearby field a Lapwing provided a closer opportunity for the lens before I eventually drove back southwards to my overnight accommodation at Barton Mills and decided to revisit the RSPB Lakenheath Reserve again the following morning before returning home. 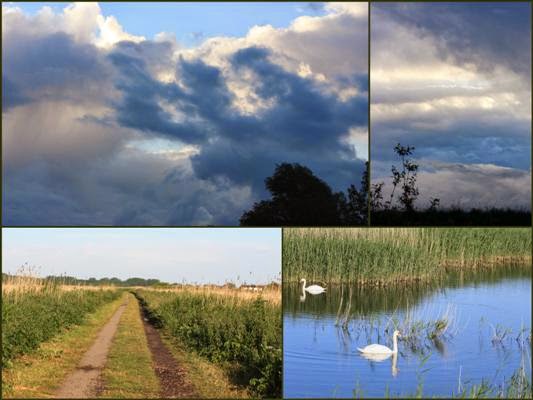 A rain front had moved through overnight and there was still plenty of cloud and drizzle at 6am but the conditions slowly improved over the next two hours and I was fortunate to have good views of three separate Bittern in flight and the pair of Common Cranes flying off to their daytime feeding area. 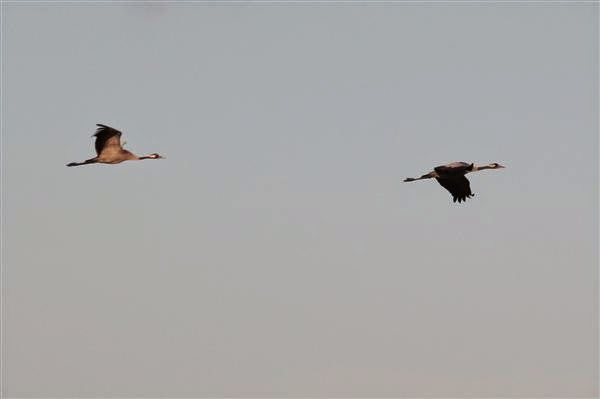 My thanks go to Richard H for generously inviting me along and for the company of Rich S, Neil R, Matt P, Dave B and Mark L on a grand birding day. My overall tally for the trip was 75 species of which 7 were year ticks but no lifers this time.  FAB.

Linking to Camera Critters,  I'D-Rather-B-Birdin' and Wild Bird Wednesday.
Posted by FAB at 10:55