Another visit to Epsom and Ashtead Commons yesterday (Thursday) in very dull overcast conditions was rewarded by finding 5 Shoveler on the Great Pond (3 males and 2 females). As is often typical of this species they stayed a long distance from the lens so here is an image from a different encounter elsewhere. 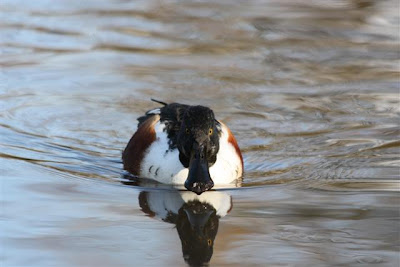 Other sightings around the pond included one pair of Mandarins; obviously the 10 males seen earlier this week have moved on; several Canada Geese, Mallard, Coot, Moorhen, Grey Herons and just one lonely male Teal. 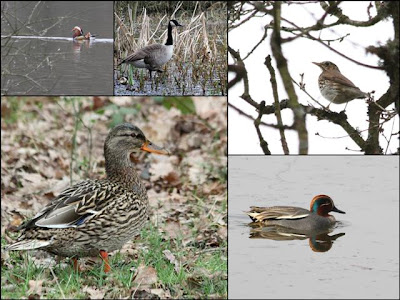 A Song Thrush was high in the overhead branches blasting out its repetitive song for all to hear with Carrion Crows on sentry duty atop a number of lookout posts. The usual Tits were everywhere plus Green and Great Spotted Woodies calling from various directions. 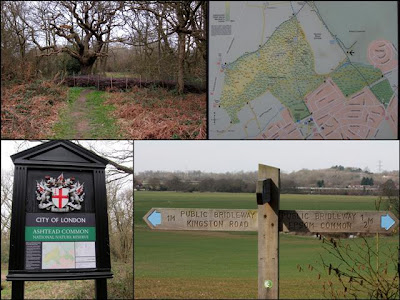 Leaving the very muddy surrounds of the pond I decided to head onto Ashtead Common and made a wide circuit to the southern boundary where my efforts were rewarded with a brief view of a 'silent' Chiffchaff and at least 3 Dunnock in full squeaky voice. Very little was added on my route above Rushett Farm apart from the sound of Skylarks singing and four Lapwings wheeling about in their dancing flight above the  fields. So this weeks efforts have finally raised the patch list year total to 51 species.

We met some friends for a reunion walk at Pagham Spit and the North Wall around midday today but unfortunately the forecast suggesting that the heavy rain would ease off did not oblige so it was very wet birding and definitely no photography!  The highlights were two female Scaup and Red-breasted Mergansers on the main lagoon; another silent Chiffchaff; a scattering of waders and the usual wildfowl around the edges of the harbour plus a calling and flying Cetti's Warbler at the North Wall.
We have a reservation for a meal together in a few hours so I will wish everyone an enjoyable wildlife watching weekend.  FAB.
Posted by FAB at 15:58