Most commonly it is the female gender of most species that sports a plumage enabling them to be less noticeable as they are the ones that brood their youngsters. However there are some particular species where both partners, unless spotted out in the open,  are easily able to blend into their natural habitats and can be extremely difficult to locate unless you know exactly where or what to look for.


In my somewhat limited experience the ultimate camouflage expert is the Bittern but as I don't have any decent photos I thought I would share some of the Common Snipe (Gallinago gallinago) whose cryptic plumage, especially when it is sitting still with its long bill resting along its back, easily enables it to become part its surroundings. 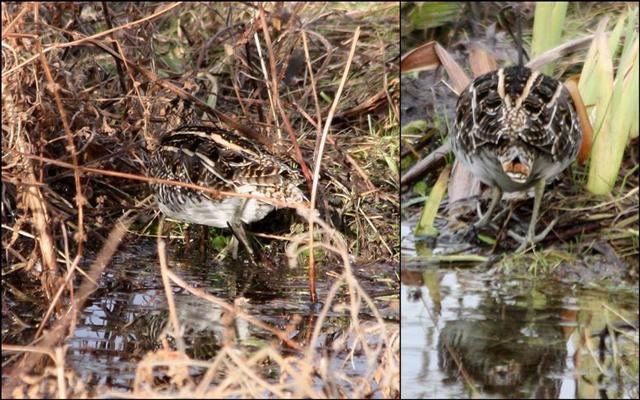 As you can see from the first two images the upperparts are mottled brown with distinctive straw yellow stripes that match the colour surroundings in its usual breeding habitats of marshes, bogs, wet meadows, tundra and moorland. (I watched this individual from a hide at the Wildfowl and Wetlands Reserve at Barnes in early January. It was feeding below a grassy bank along the muddy water margin far to my right where there were no windows that opened and a fence obstructing my views so all the images are cropped.) When it sat at the waters edge the ID was simple ... a disproportionately long straight bill with the distinctive central light coloured head stripe ( Jack Snipe has a much shorter bill,  an obvious dark central head stripe and a split supercilium) and the rather dumpy body shape clearly says this is a Common Snipe.
A small stocky wader native to northern Europe and Asia which most closely resembles the Wilson's Snipe (G. delicata) found in North America. 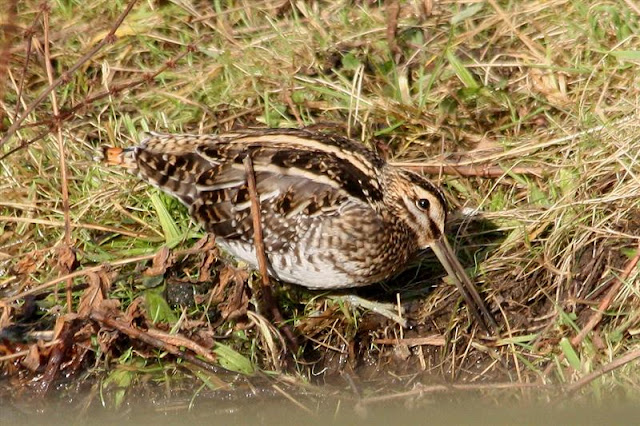 They forage for invertebrates by probing the soft mud or ground in a sewing machine motion. 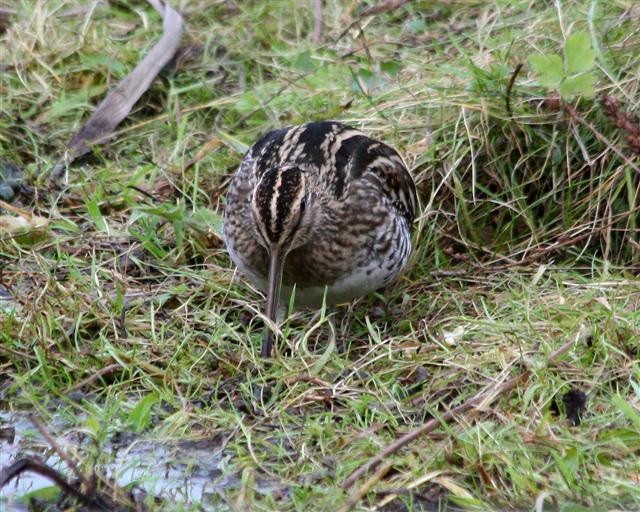 The sensitiveness of the extreme tip of it bill means that it can distinguish whatever it encounters even though it cannot see its prey. This species faces severe problems when their habitat deteriorates or is not waterlogged at the end of the winter. If the ground becomes dry and hard then breeding will cease. 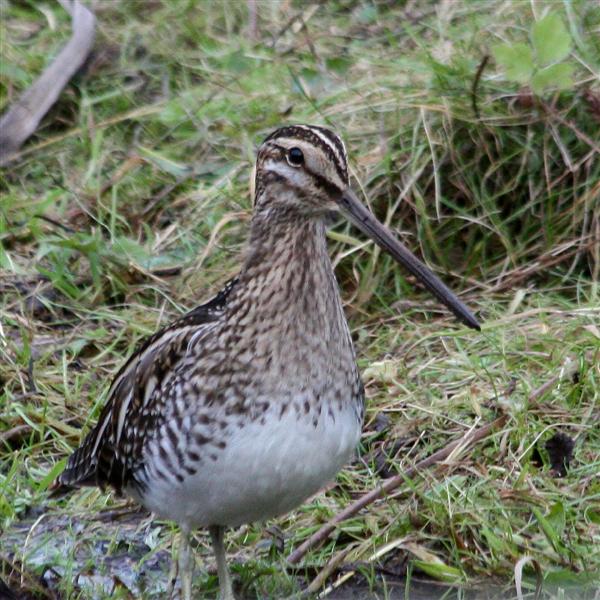 The underparts are pale with grey-brown spotting and stretching down its flanks. Old folk names include 'mire snipe', 'horse gawk' and 'heather bleater'. The Common Snipe is very shy and easily able to conceal itself but if flushed from cover it flies away in a series of erratic zigzags to confuse its predators. The obvious difficulties in hunting this species gave rise to the term 'sniper' which generally refers to a skilled military sharpshooter.    FAB.