So here I am again ... standing in a tree lined roadway with the nearly leafless fingers stretching up into the empty late afternoon sky. The strengthening breeze pushes the light grey clouds towards the setting sun slowly falling towards the horizon far beyond the wide open freshwater marsh. A Barn Owl that I had been watching earlier hunting over the marsh is now just a pale blob perched on a distant fence post. A Kestrel, just barely visible with the naked eye, hovers high above the marsh searching for its final meal of the day.


There is stillness around me, the temperature is falling, my breath lingers momentarily before being whipped away by the chilling breeze. My inner voice says "why the hell are you doing this when you could be enjoying a welcoming open fire, a hot meal and a warming beverage?" .... but that will have to wait, because as the light improves, my ears pick up the distant but unmistakeable 'yak-ak-ak' sounds that travel miles in the quiet of the onsetting dusk. The volume of 'yakerting' increases noticeably second after second and from afar my eyes discern the V shaped skeins heading towards me. 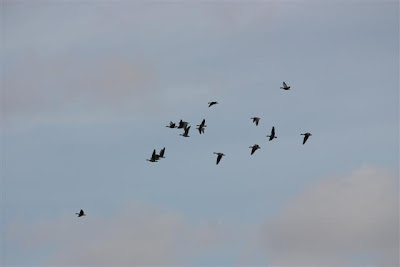 It happens so fast as the sky becomes crisscrossed with hundreds, then thousands of talkative shapes. 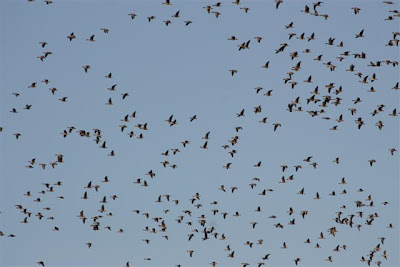 My heartbeat rises as the noisy skeins break up into smaller groups. Many hundreds pass directly overhead and then 'wiffle' to loose hieght, still nervously talking to one another, and land in the nearby fields. 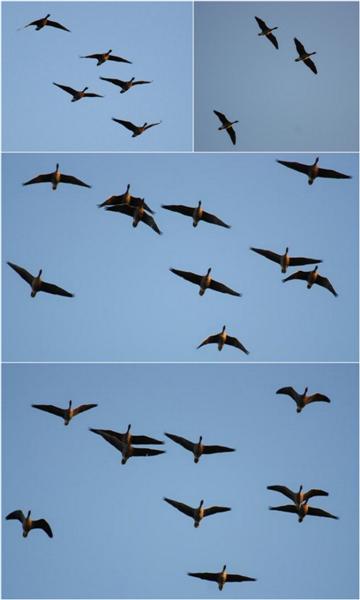 The grey-brown shapes quickly settle into feeding mode and while grasping their last meal tell their neighbours where they have been during the day. 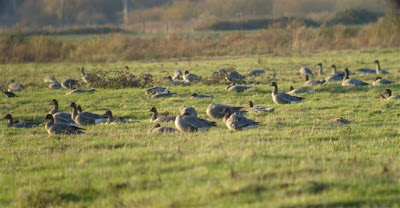 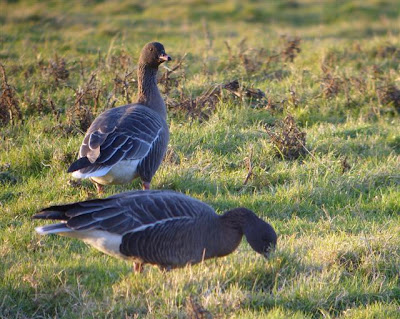 As my eyes become accustomed to the failing light of near dusk I turn around and pick out a line of seven gracefully flapping white shapes against the background of the rising ground as they fly low towards me from the east heading to their chosen roosting site. This scene is repeated a few minutes later when another group of Little Egrets follow the same course and disappear westwards into the gloom. The daytime noises diminish as many of the birds have slid away to their beds for the night. The near silence is occassionally interupted by the "tu-luee" call of a Redshank and then there is nervous movement across the marsh as the shapes begin to lift off once more, again talking to each other, and head off to their overnight roosting sites on the mudbanks, sandy or shingle ridges and sometimes on a calm sea where they hope they will be safe from any night time predators. 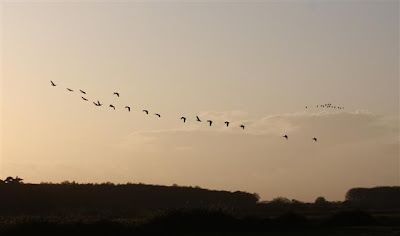 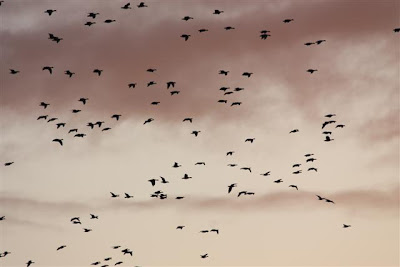 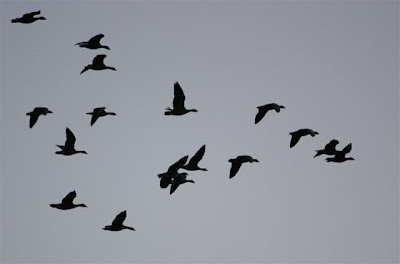 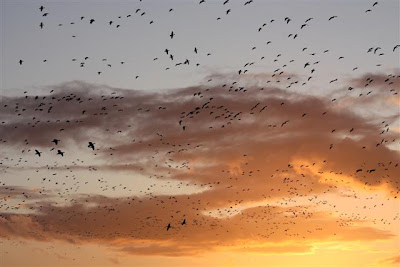 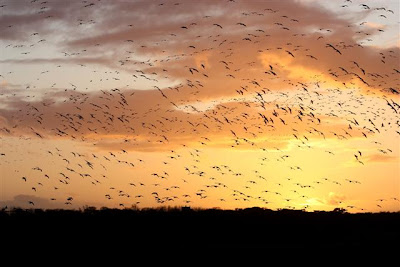 Eventually ...... the sky is empty until the next time. 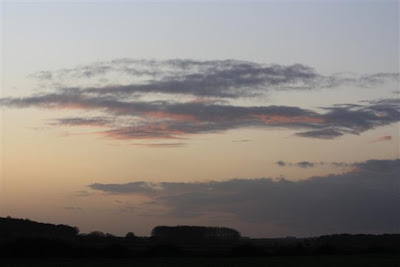 I would challenge anyone not to be enthralled by the amazing natural spectacle of tens of thousands of winter Pink-footed Geese in Norfolk.

Pink-footed Geese (Anser brachyrhynchus) breed on the arctic tundra in Greenland, Iceland and Svalbard. The Geenland and Icelandic birds arrive in the UK from September and in Norfolk, their most southerly wintering grounds, the numbers build up from October through to December. The smaller Svalbard population winters primarily in the Low Countries (Netherlands, Belgium and Luxembourg). Since the mid 1980's, the last severe UK winter, the Norfolk numbers have substantially increased from 19,000 in 1985/6 to over 114,000 in Dec 2008. Whilst improved breeding success has accounted in part, the tolerance and assistance of local farmers providing undisturbed access to grass, stubble and sugar beet fields plus a 'no shooting policy' (in the UK) has done much to assist the continuance of this annual winter spectacle. [Figures obtained from wwt.org.uk/research/monitoring/species/pinkfootedgeese]   FAB
Posted by FAB at 21:42