An Orchestral Dawn and then?

Saturday 2nd May and the alarm awakens the ‘Early Birder’ just before 4am. With sunrise due at 5.20 I head out to 100 Pound Bridge at Bookham Common and with the car window open Blackbirds and Robins constantly serenade me during my 30 minute journey.
A low mist hangs over the fields and the wood is just a blurred shape as I arrive at my destination. A slight chill in the air and the sky is getting lighter as the sun climbs ever nearer beyond the horizon but around me the dawn orchestra is already in full voice. The leaders are definitely the Song Thrushes, pumping out their repetitive phrases. 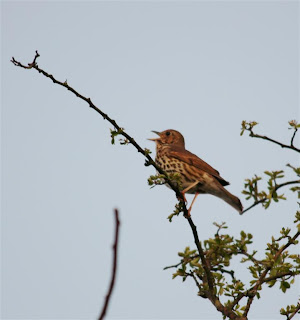 Song Thrush - Leader of the Orchestra

A lone Blackbird, perched high on a dead tree, silhouetted by the rising light, clearly signifies his dominance with his slow tempo, rich melodic, mellow tune. Next is the Blackcap, its scratchy, hesitant beginning switches to its fluty warble and is quickly joined by the slow, measured series of clear but forceful notes, constantly repeating [chiff, chiff, chaff...chiff, chaff] from a Chiffchaff. Next there is the scratchy, jerky and jolty rhythm from a Common Whitethroat; a Great Tit utters one of its many varied sounds; the rattling trill of a Lesser Whitethroat; a Wren repeatedly explodes with a rapid succession of 70 plus notes in a matter of seconds; there is the cooing calls of Wood Pigeons and Doves in the background and from afar a Cockerel announces that dawn has begun. As I walk into the clearing my senses heightened and bombarded by sounds all around me I pick out the repeated cher, cher, cher, followed by the powerful and truly melodic phrases incorporating trilling sounds, fluted whistles and gurgling notes from the quintessential songster, the NIGHTINGALE.
The scientific name Luscinia means, roughly, a ‘singer of lamentations’, and Nightingale itself means ‘night singer’. The bird is synonymous with its song, but contrary to popular belief it doesn’t only sing at night when the purpose for the unpaired males is to attract overflying females. Check out this link for research by Petite Camargue Alsacienne for more information.
Males often sing during the day when their motivation is more territorial, directed towards their rivals and the bird shifts perches more often. Each male, I understand, has a repertoire of some 100 up to 300 different phrases or song types, delivered in regular cyclic succession and up to 400 times per hour. You have to marvel at its sheer effort and persistence. This songster is not often seen, although I do have some exceptional memories of watching individuals in the open and in full song for up to 20 minutes, but as usual it vocalised from deep within the entangled brambles and low dark bushes within a few feet of where I was standing. When sighted the bird is to many very disappointing to look at as it’s just like a big brown Robin but for me its contribution as the impresario during this ‘orchestral dawn’ was most enjoyable. During the next 30 minutes I locate a second territory singer as the sky brightens and takes on a bluer hue and the rays of the rising sun pierce through the tree canopy lighting up patches beneath my feet.
Do my ears deceive me, or was that a Cuckoo calling in the far distance? The call is not repeated but I’m patient and hopeful that I will catch up with this species sometime during the next 6 hours! Over the next hour or so I strolled around various parts of the common and caught up with Willow Warbler, a male Bullfinch, a pair of Mute Swans, Canada Goose, 2 Little Grebes, a female Mallard acting nursemaid to 8 chicks, Coot, Moorhen, Dunnock, Blue Tit, Great Tit, Long-tailed Tit, Jay, Magpie, Crow, Jackdaws, Starling, House Sparrow, Kestrel searching for breakfast, Cormorant flying overhead, Grey Heron quietly searching the pond margins for a snack, Mistle Thrush, Greenfinch and a Nuthatch calling.

Before returning to the car for a warm beverage and snack I spent some time walking around a nearby bluebell wood where my nostrils were full of their gorgeous early morning fragrance. The sun had not penetrated the overhead leaf canopy but a few photos were taken. On the road towards Downside I stopped briefly to enjoy the ‘little bit of bread and no cheeeeese’ calls of Yellowhammers’ plus the tinkling song of Goldfinches as they busily searched for their breakfast cereal and not least the song of the Skylarks . 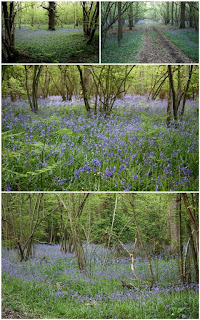 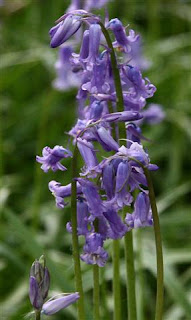 From 9am I joined a Surrey Bird Club walk around Bookham Common very ably led by Alan Prowse. AP has a vast knowledge of this, his local patch, and the walk predominately centres on locating both the resident and migrant songsters while AP identifies and explains their calls and songs plus information on nesting and breeding throughout the common and woodlands. We locate most, if not all the species I had already seen or heard, but welcome additions were at least 5 singing Garden Warblers (they had obviously arrived in the last 24/48 hours), House Martin, 3 Swallows, Green Woodpecker, Stock Dove and a calling Pheasant.
Whilst I am not a fan of using recordings indiscriminately to attract specific species, when we heard the Cuckoo some distance away, AP played a very brief snippet of the ‘bubbling call’ of a female Cuckoo and with a matter of moments the male flew into sight and perched. Over the next five minutes or so this individual constantly called out from various song posts as he made an aerial circuit around us but never perching clearly or long enough in sight for a photo! Sky watching produced a total of 5 Common Buzzards, 3 Sparrowhawks (a local pair probably chasing an interloper off their patch) and then the sighting of a lone raptor, high and moving north-west. My first thought was another Sparrowhawk but the size and chunkier shape plus the very prominent white under-tail coverts clearly seen as it twisted and turned led AP and FAB to confirm GOSHAWK. That’s another year tick for me. We also stopped at another Nightingale territory and without using a recording AP whistled and the owner duly responded and sang for everyone to enjoy. Our last port of call was to listen to juvenile Herons calling from their nests high in the woodland. 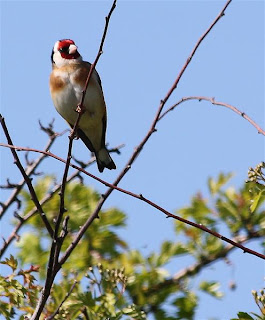