New Life on the ponds.

The weather this morning was drab with rain in the air so I knuckled down to the important chores - checking e-mails, catching up with answering blog comments and reading other blog posts - then rechecking the weather forecast.


Around midday with the wind still blowing strongly I drove over to Epsom Common not expecting to see a great deal but the walk in the fresh air would no doubt brighten my spirits. As I approached the stew pond I disturbed a mother Mandarin Duck with seven ducklings. (Note that the markings around the eye are totally different to a Mallard). Whilst breeding this is a very secretive species so I'm not sure who was more surprised, me or the mother, as she escorted her charges to cover on the other side of the pond. For the next 30 minutes I carefully attempted to get closer pictures without success as mum was keeping the little ones safely out of sight.

However she did come out of hiding when a family group of Canada Geese floated nearby. She flew behind the group, calling, and acting as a decoy she encouraged the Canada Geese to turn around. She then flew off away from the water and I didn't see her return. 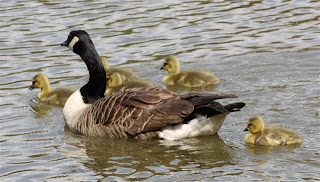 Next up was a Mallard chick attempting to face down the "Early Birder"! 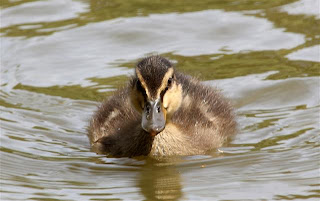 On the other side of the pond I was entertained by Canada goslings feeding on the pathway. Interesting that the parents were not upset by my presence. Can you see my mirror image? 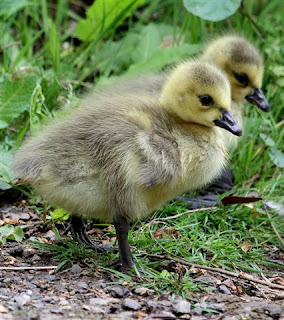 I'm far to busy feeding to pose for a portrait! 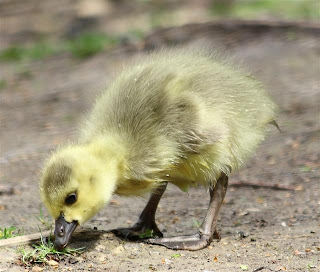 Then it was off to the Great Pond. Mallard, Tufted Duck (male & female), Coot, Moorhen, Canada Geese, Grey Herons and a pair of Swifts flew overhead. I also spotted two more Mandarin females, each with 6 or seven chicks in tow but a long way away. Then a male Mandarin Duck made a brief appearance to protect one of the family groups from a Mallard that was getting too close. The question was would he come closer to me so I could get a decent photo. 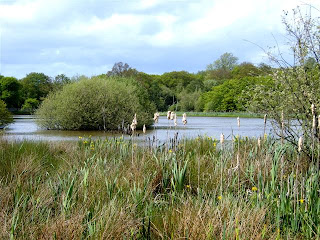 Well after a 20 minute wait the male Mandarin eventually re-appeared on the closest island about 100 yards away and this is the result using the DSLR & 70-300 lens. I had not taken a tripod but my Swaro scope was in the rucksack so could I get a decent digi-scoped shot. Well you will have to be patient and wait for a subsequent post. 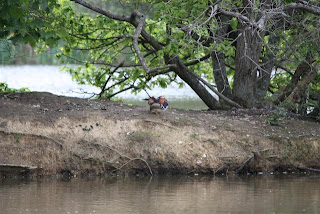 After leaving the ponds I saw and or heard Greenfinch, Blackcap, Whitethroat, Chiffchaff, Wren, Blackbird, Blue & Great Tits, Chaffinch, Jay, Carrion Crow, Magpies, Jackdaw, Great-spotted Woodpecker calling and a Black-headed Gull flew over. On the Ashtead side of the common there was evidence of heavy felling of trees. 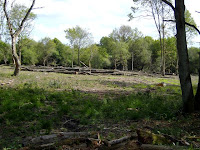 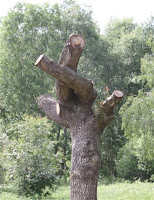 Then I spotted this interesting tree - a ready made seat or the rear end of a prehistoric animal? DO YOU HAVE ANY OTHER SUGGESTION?

My last sighting was this male Roe Deer resting in the grass. Now I wonder if this is the same male that the 'watcher' encountered on 24th April. See 'Chance Encounter with a Roe Buck'. 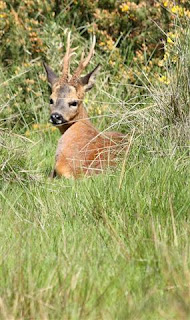 I have some further images of this beautiful beast that I will share with you soon.