On the 24th April the 'watcher' had a chance encounter with a Roe Deer buck. (You can click the link to review that experience). Here are two of the photos taken at that time.


I should point out that unlike other deer species the Roe casts its antlers in November or December; grows new ones during winter, protected from frost by the woolly 'velvet' which is usually rubbed off by May. 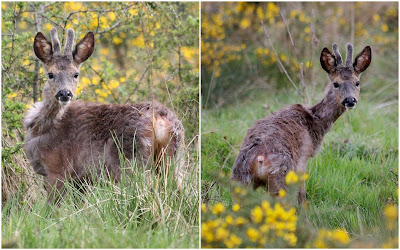 During my stroll on Saturday (see previous post) the 'watcher' was again under surveillance by the 'watched', who this time was partially hidden by the grass and gorse. Once again the 'watcher' stood motionless and slowly crouched down while the 'watched' continued to stare intently in the 'watchers' direction. 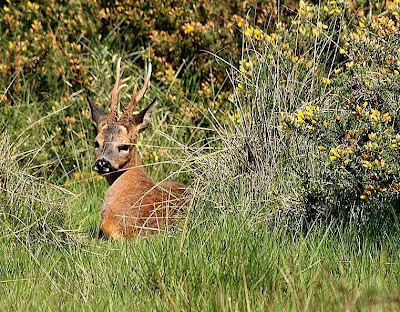 The 'watcher' noted the changes in the appearance of the 'watched'; the moult of his winter (grey-brown) coat into his foxy-red summer garb is nearly complete and the growth of the antlers that are 'pearled' near the base; and a question surfaced: "Could this be the same buck?" The 'watched' was not unsettled and maybe was thinking " Have I seen this intruder to my domain before?". 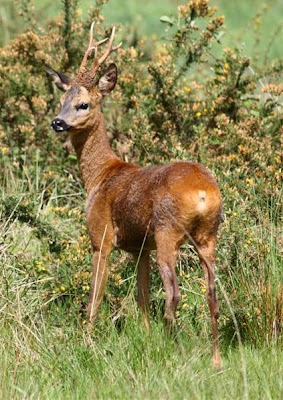 After what seemed ages but was probably only five minutes or so the 'watched' stood up slowly, still keeping a wary eye on the 'watcher' and then moved away into deeper cover. 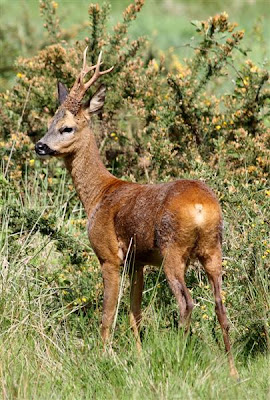