Cold and Grey at Papercourt.

A much colder day today, so with the added protection of a thermal layer, I headed over to Papercourt. As usual the main inhabitants on the sailing lake were countless Coots, numerous Tufted Ducks, Mallard, one female Wigeon, four male Pochard, a Little Grebe doing its usual disappearing act every few seconds, the occassional fly past by a Cormorant, Black-headed Gulls, Moorhen and quite a few Mute Swans. 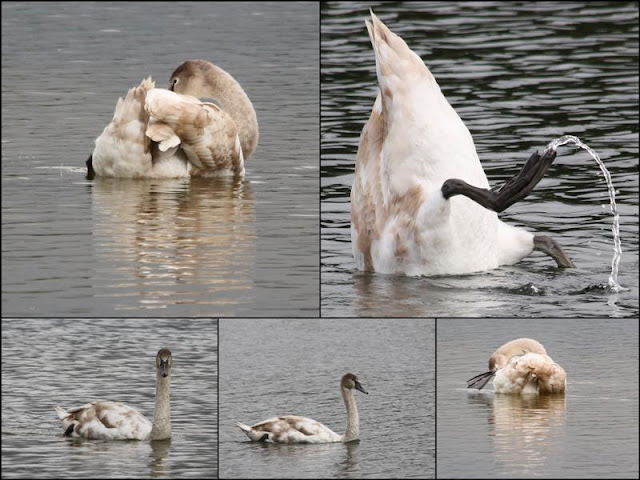 The only species that came close enough for the lens was this juvenile Mute Swan enjoying a wash and brush up.

I met a lady birder who was visiting this location for the first time so after a brief discusion on what we had both seen so far we joined forces and headed off across the fields towards the Tannery. Our sightings were somewhat sporadic but Robin, Dunnock, Crow, Long-tailed Tit, Blue Tit, Nuthatch, Song Thrush, Green Woodpeckers, plus lots of Blackbirds and Jays were noted. From the bridge over the Wey Navigation we added Mallard, Pied Wagtail, a single Fieldfare, Goldfinches, Chaffinch, Greenfinch and a few Siskins. 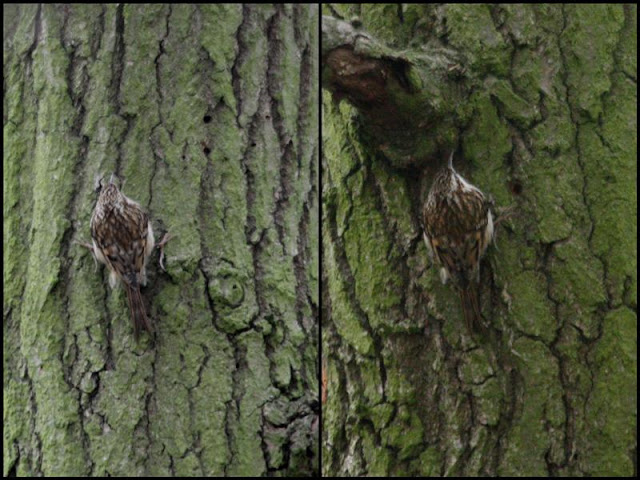 Along the towpath my companion spotted a Treecreeper. The lighting conditions, even under the depleted leaf canopy, were atrocious so I pumped the ISO up to 1600 and blasted off a few frames ... not the sharpest but in the left-hand image you can just make out the legs splayed out sideways with its claws attached to the bark to assist its movement upwards.
At Papercourt Lock we added a single Lapwing on the grazing marsh. A Wren called as it flitted between the pollared willows; a small party of House Sparrows dipped in and out of the hedgerow and a group of Parakeets called noisily from their distant perches. Not the ideal day for photography but a pleasant stroll in good company ...... thanks Shirley.    FAB.
Posted by FAB at 22:36