1st day of spring and Buzzards

Having heard about migrants arriving this week in Sussex I decided to drive 40 miles south to the area around Greatham. My first stop was to park roadside and walk onto Waltham Brooks, an area of grazing marsh with areas of open water, managed by the Sussex Wildlife Trust. 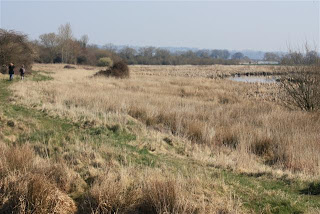 Goldfinch and Greenfinch were calling from a nearby garden. The first sightings were of singing Chiffchaffs, Wrens, Robin, Blackbird and Starlings. I heard Water Rail as the first Common Buzzard flew over with large flocks of Crows and Jackdaws calling from the nearby farmland. After crossing the railway line a pair of Sparrowhawks flew over but too far away for a photo. Reed Bunting and then a male Stonechat briefly perched on a nearby bramble bush. Meadow Pipits appeared out of nowhere and disappeared into the dense grass just a quick. My attention was the grabbed by two more Common Buzzards soaring overhead. I haven’t tried to photograph moving objects with my new Cannon 450D and 70-300mm lens, so with a clear sky, this was an opportunity not to be missed. Auto focus was all over the place but I’m not totally unhappy with the ‘cropped’ outcome. 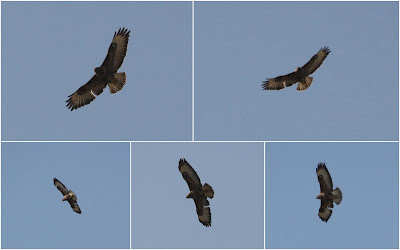 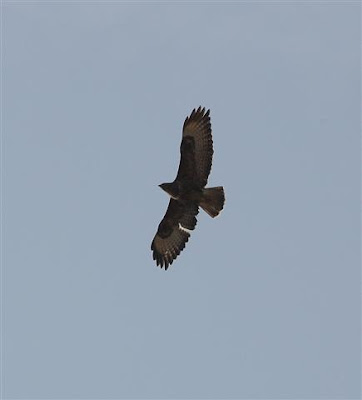 Other sightings were Mallard, Grey Heron, Green Woodpecker, a fast flying Kestrel and another Buzzard as I returned to the car.
With the possibility of Garganey, Little Ringed Plover and hirrundines I visited Pulborough Brooks RSPB. When I checked in at the Info Centre the lady said “I presume you don’t need a map?” – How did she know I’ve been coming here for well over 15 years! 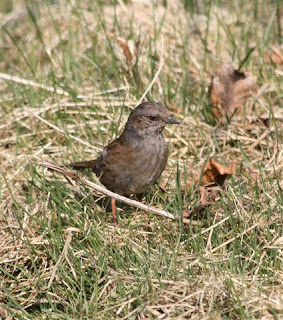 Blackthorn blossom was everywhere, signifying the "start of spring". 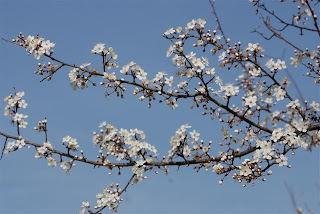 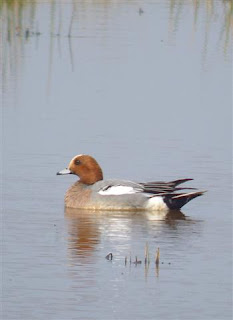 Eurasian Wigeon
Arriving at home mid afternoon, while enjoying a welcome cup of tea on the patio, Anita and I watched Blue, Great & Long-tailed Tits, Greenfinch and a female Siskin on the garden feeders with Parakeets flying overhead. 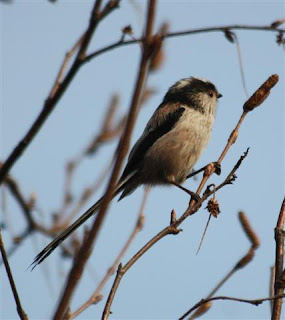 All in all, despite the lack of two of the 'target' species, not a bad day after all.