Exactly four years ago I published a post entitled 'Boots are made for ....' and reported on the wildlife I encountered on a particular walk so I thought it would be interesting to repeat the walk, which I did today, and review any changes. Well, of course, the boots have changed ... the others wore out some time ago but my shadow is still the same! However the introduction to the original post (see below) is still relevant today. 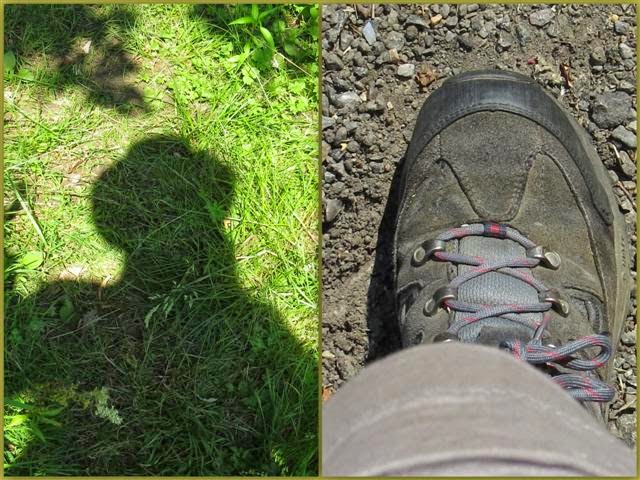 "These boots are made for walking, and that's just what they'll do".

The repeated lyrics of the well known song by Nancy Sinatra released in 1966, when I was somewhat younger, and subsequently covered by many other artists including Jessica Simpson's own rewritten version. The rest of the original lyrics bear no relationship to my daily life but without boots I wouldn't have got anywhere. As a youngster I explored the local common and woodlands; as a teenager I hill-walked (often with my father in places such as the Brecon Beacons), hiked, rock scrambled and even climbed a bit with a close friend (Snowdonia, North Wales in the depths of a snow and ice filled winter was fun); I cycled a lot (even owned a tandem for a few years which won the heart of one young lady ... for a short time!) and also canoed along various rivers and canals; then car ownership enabled me to explore other parts of the UK testing the boots over mountains,  moorlands, valley floors, clifftops and beaches. In more recent times the boots now usually carry me over less treacherous terrain as I stroll here and there often stopping to watch our native wildlife or to just soak up my surroundings at a much more leisurely pace. 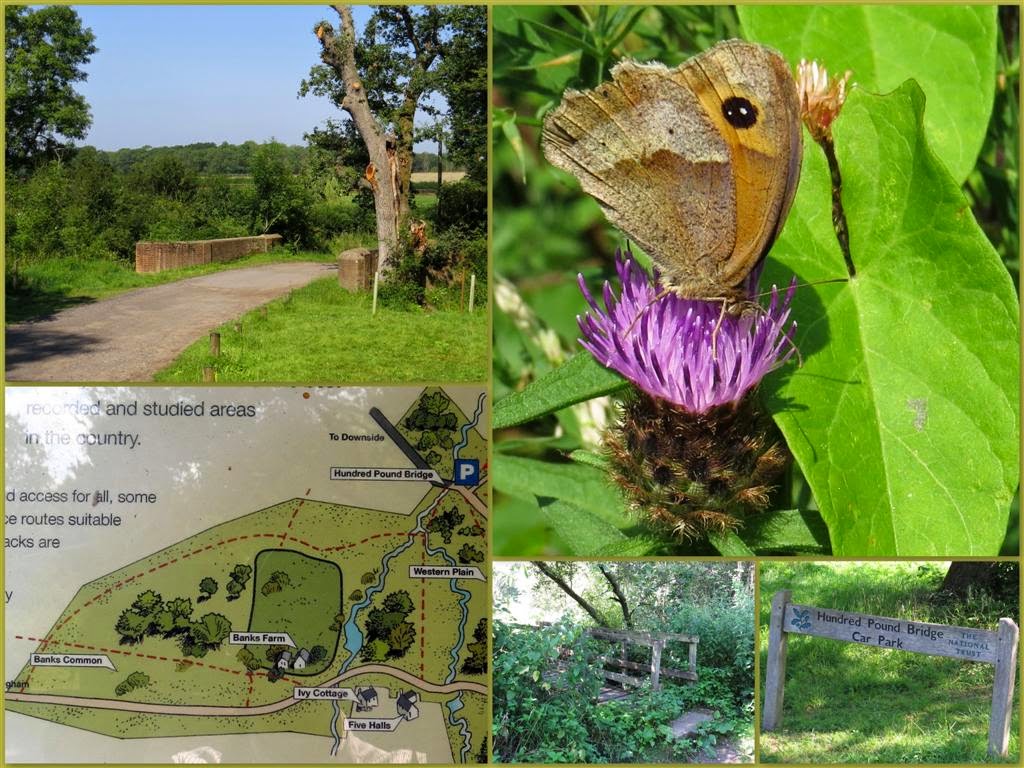 So are you ready boots? Start walkin'! An anti-clockwise circuit of Banks Common (connected to Bookham Common which has featured in numerous posts). The first thing I notice is that the vegetation is a lot thicker and higher than July 2010 as a Great-spotted Woodpecker repeatedly utters its distinctive 'kick .. kick' call and a male Blackcap flies across my path while a Goldfinch converses with its companions beyond my immediate view. The PowerShot SX50 HS focuses on the first of numerous Gatekeepers nectaring on Lesser Burdock. 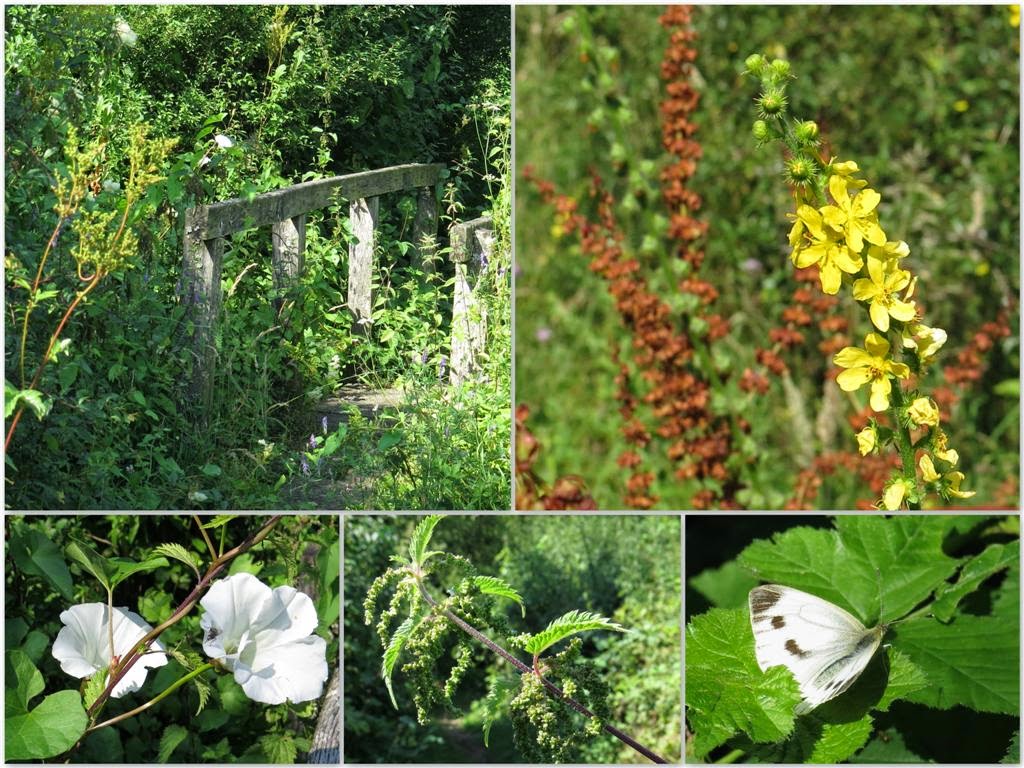 As I head towards the bridge a passing dog walker advises me that the path ahead is very overgrown and muddy underfoot .. I'm not deterred, I'm wearing boots! I am however conscious of the ever present danger of being stung by the overhanging large nettles as a tiny insect takes a nip somewhere above my bare ankle. As in the past the hedgerows were full of Bindweed, their white trumpets glowing like light bulbs amongst the dark green foliage where a 2nd brooded Small White Butterfly was resting. Natures colour palette of  greens, blues, purples, yellows and reddish-browns was provided by Teasels, Bittersweet, Tufted Vetch, Agrimony, Tansy, Grasses, Thistles, Ragwort, Honeysuckle and Common Sorrel just to name but a few. 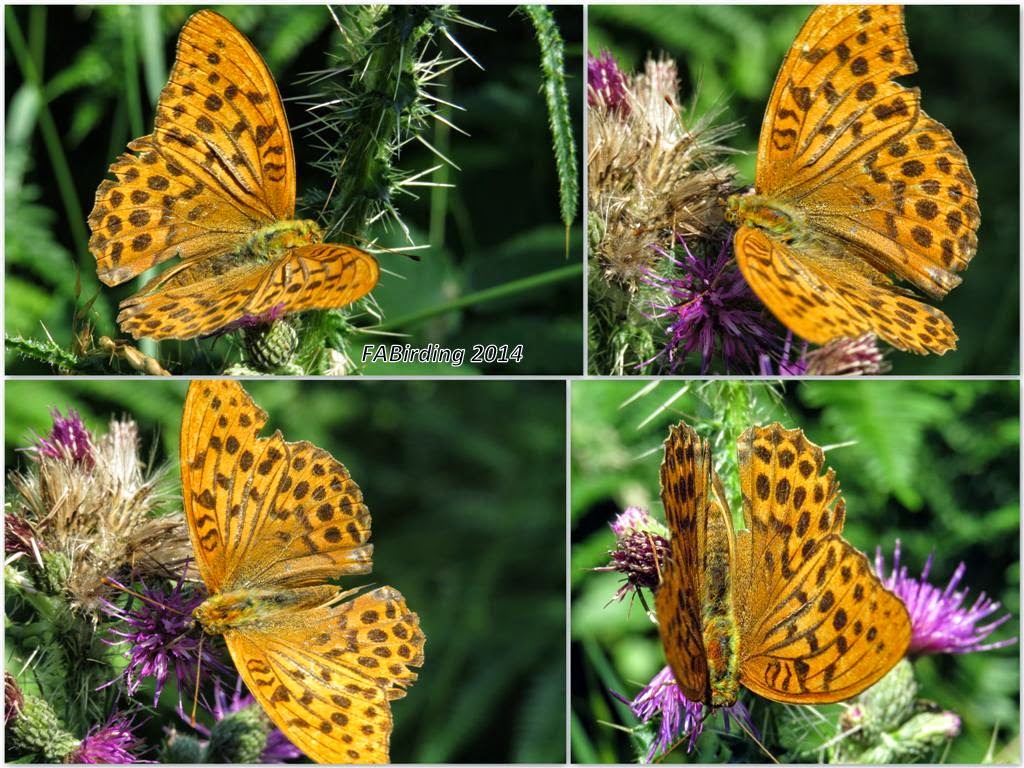 Silver-washed Fritillary where thin on the ground with only two individuals seen during my whole walk. With the relatively high temperature I was glad of the shaded areas throughout my walk but they afforded little in the way of wildlife activity. However as soon as the view opened up that changed dramatically 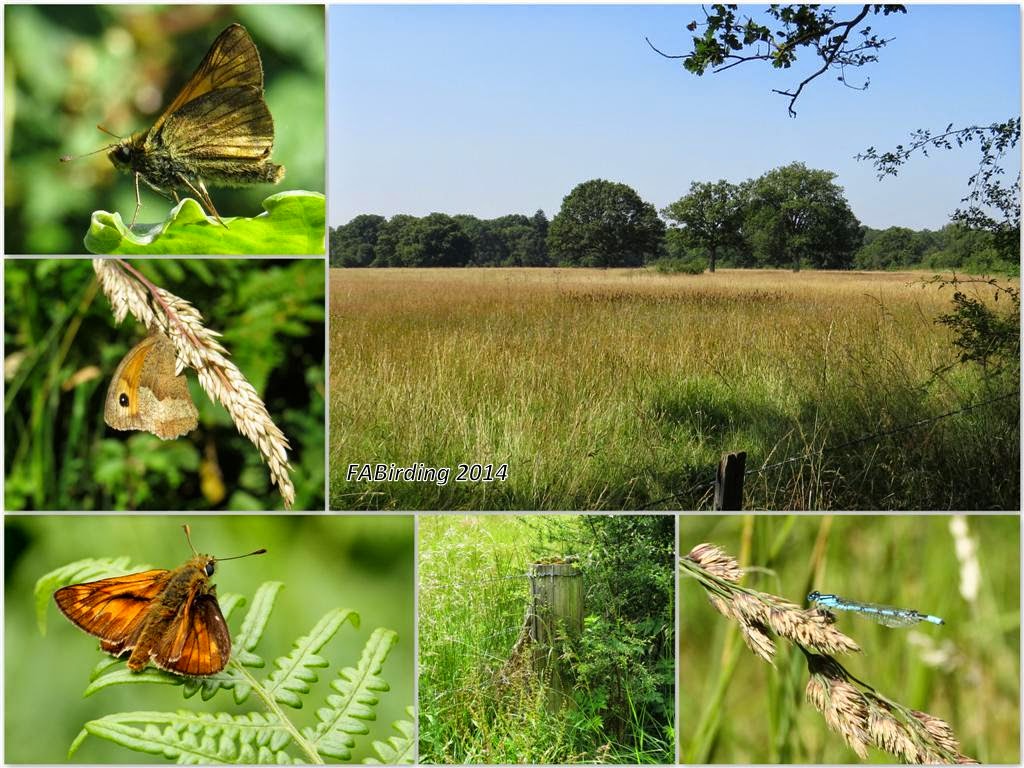 On the opposite side of the meadow a single Common Buzzard drifted above the tree line constantly issuing its mewing 'piiyay..piiyay' call while Large Skippers, Meadow Browns and Common Damselflies rested nearby. The fence post is still standing but the moss has invaded its crown. 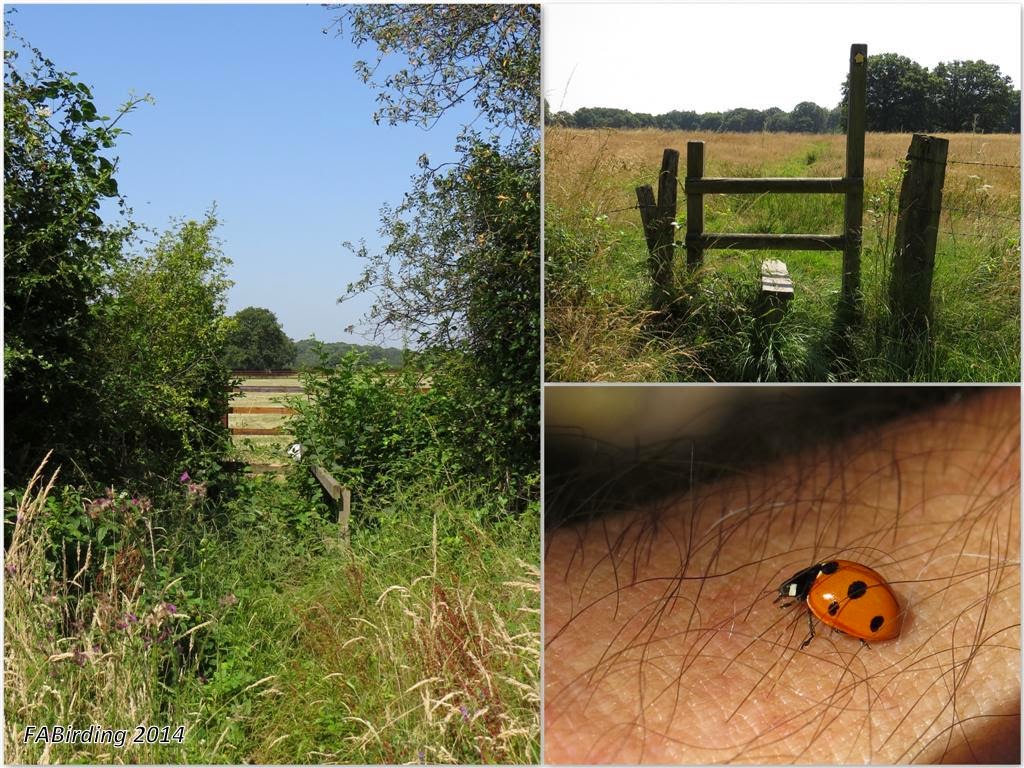 The view over the style hasn't changed but in the opposite direction the hay field has long since been converted into horse paddocks for expensive bloodstock. At this point I heard the calls of both a Chiffchaff and a distant Nuthatch as a number of Blue Tits flitted through the hedgerow. I also noticed that a Dragonfly had landed 15 feet high up on a bare branch but totally inaccessible for a photo. Using my bins I ascertained it was a Common Hawker and then a Ladybird landed and without a 'by your leave' hitched a ride on my arm for a while. 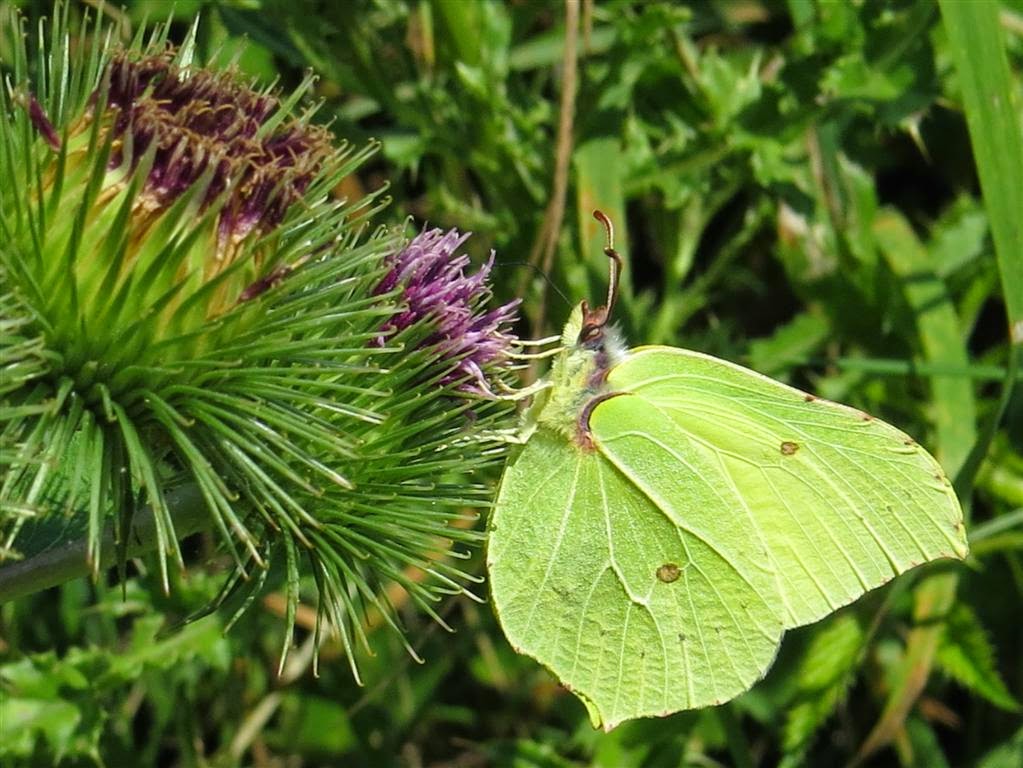 There were one or two fresh Brimstone getting a nectar fix.

Surprisingly I didn't come across any horse riders during this leisurely stroll but I did watch a Kestrel hunting on the far side of the meadow for over 15 minutes, constantly dropping into the long grass and then rising up again to hover while looking for a tasty meal. I think it was eventually sucessful as it flew to its regular tree and didn't reappear. 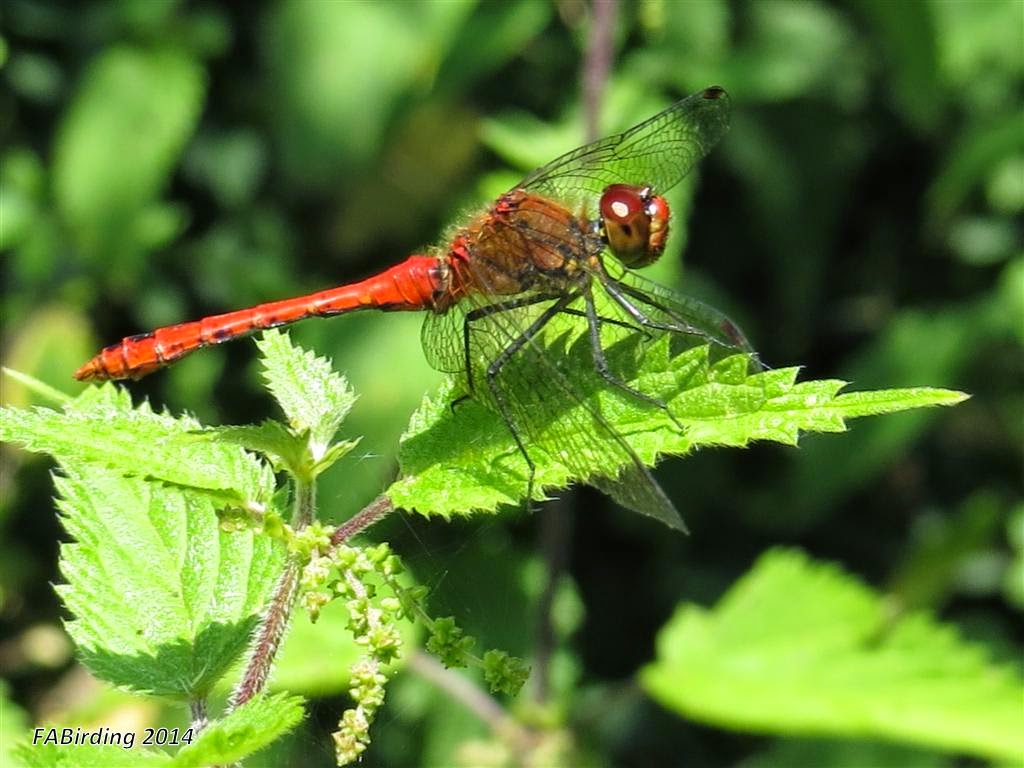 During the walk I saw several male Darters frantically chasing one another during their territorial battles and towards the end of my circuit I found one male Ruddy Dater taking a well earned rest. 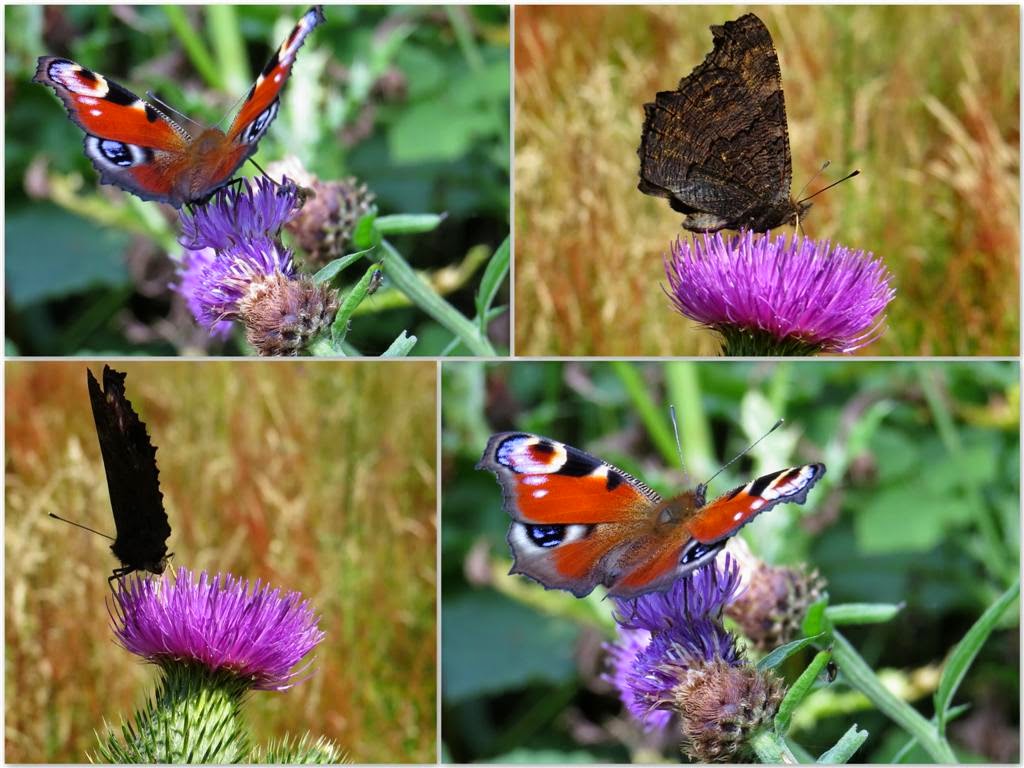 As I returned to my vehicle the final wildlife colours were provided by a beautiful Peacock showing off its brilliant upper wing patterns and its cryptic under wing camouflage. 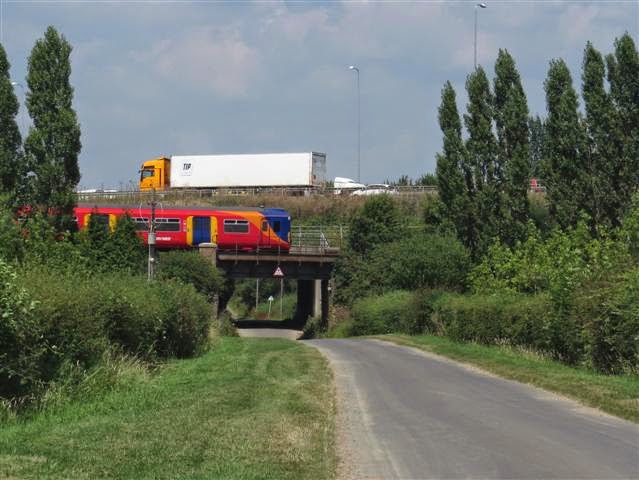 In conclusion, a few changes to the landscape, a lack of sightings of any White Admiral butterflies (a typical scenario on most of my recent forays) and certainly fewer birds seen or heard with the notable absence of any colourful Yellowhammers.

However one thing doesn't change ... on my exit route the traffic on the 'magic roundabout' (M25) was at a standstill but the trains were still running!

I make no apologies for the length of this post but do hope you will join me again sometime when the boots go walkin'. FAB.

Linking to Saturday's Critters hosted by Eileen.
Posted by FAB at 19:29