Over the past two days I monitored reports that a flock of 19 Tundra (Bewick's) Swans had been seen frequenting flooded fields close to the River Mole at Cobham. This species is a fairly scarce winter visitor to Surrey having travelled all the way southwards from the Siberian tundra so I took the opportunity to head out and see if they were still around. As I parked the car I was joined by Trevor, a close birding friend,  so we joined forces to seek out our joint quarry. 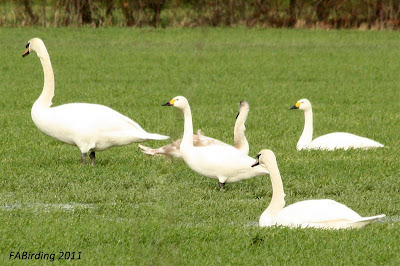 Walking onto the road bridge over the river provided reasonable views with the bins as they rested and fed together with Mute Swans, our much larger and common species, which also provided a clear comparison in size. Unfortunately there were far too many branches impeeding a clear view for the camera so we decided to follow the footpath alongside the river to see if we could get some better views. 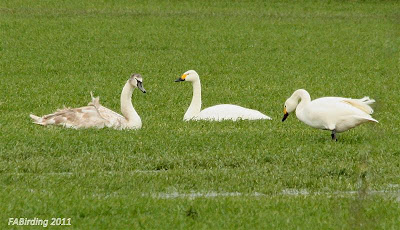 Although our quarry was still over 100 yards away a gap in the treeline eventually offered an opportunity for some distant record shots (all cropped) while trying to keep the gear steady with freezing cold fingers! 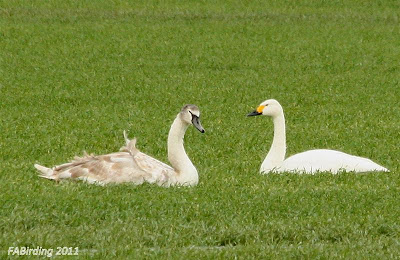 This image clearly shows the smaller compact size of the Bewick's compared to the 1st winter Mute ... a much shorter neck, more rounded head and of coures the smaller bill with its distinctive yellow patch that doesn't extend to the nostrils (unlike on a Whooper). 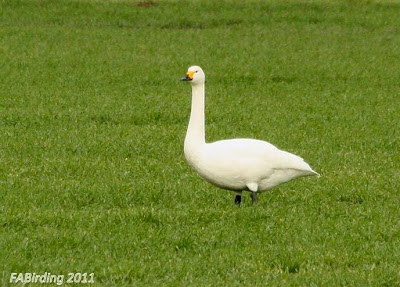 Beyond the Swans were approx 34 Egyptian Geese and as we turned around to head back to our cars a female Goosander swam upstream but was far too flighty for the camera!

Now all I need is a Whooper sighting to complete the full set for 2011.   FAB.


Check out the Pine River Review for more World Bird Wednesday images.
Posted by FAB at 18:42