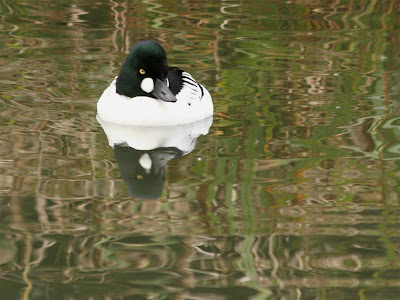 As a follow up to the post on the Smew (aka White Nun) I thought I would share another of my favourite winter ducks, the Goldeneye (Bucephala clangula), a species that also nests in tree holes. 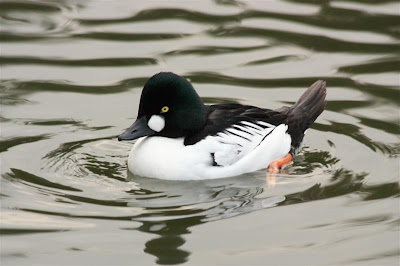 From a distance the male in breeding plumage appears to be just gleaming white with black upper parts but on closer examination  (see images 5 and 6 below) other colours become apparent. As part of its courtship display in early spring the male tosses its head back so the bill faces backwards and then stretches its neck with the bill pointing skywards while often splashing its feet. I have seen a male practicing recently but couldn't get close enough for a decent view. 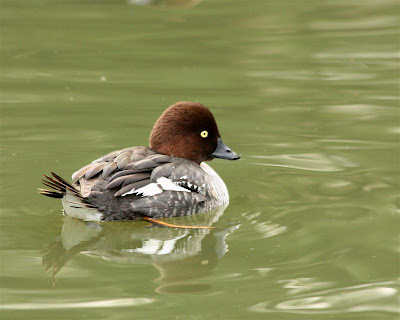 The female sports a mix of colours; a deep brown rounded head with pale yellow eye, with ash-grey flanks and breast. A small triangular shaped bill that is totally dark on a juvenille (above) but has a yellow band at the tip on an adult female (see below). 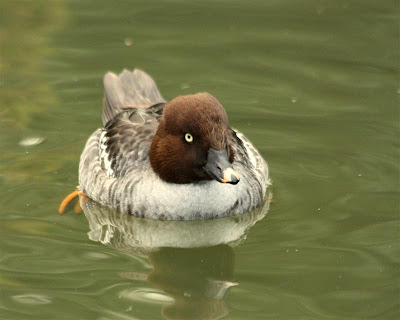 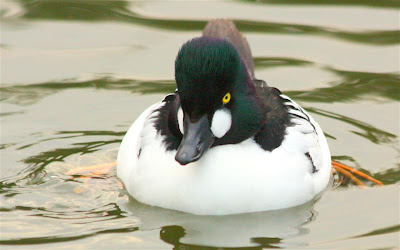 A closer encounter reveals a head colour that can appear to be either green or purple-black depending on the angle of light. The puffed out cheeks which give it a triangular shape when viewed head on is very diagnostic together with the white loral spot and yellow eyes. 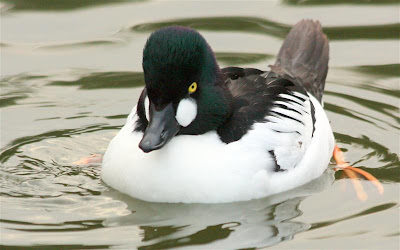 The (Common) Goldeneye is a regular winter migrant to the UK and can be seen around the coast, in estuaries, on lakes and reservoirs until it returns northwards in the Spring.    FAB.
Posted by FAB at 22:24