Return to Papercourt with SBC.

I returned to Papercourt on Sunday morning for a field trip with the Surrey Bird Club (SBC). A small gathering of five lead by Steve Chastell started off from the car park at Newark Bridge. Initial views over the damp, frozen meadows and surrounding trees produced Blue Tit, Great Tit, Goldfinch, Chaffinch, Bullfinch (not seen by me), Greenfinch, Reed Bunting, Jackdaw, Crow, Blackbird, Jay, Magpie, Cormorant, Fieldfare, Woodpigeon, Collared Dove, Green and Great Spotted Woodpecker. After crossing the road to head towards the main pit a Sparrowhawk flew over being mobbed by a Crow with six companions in tow just in case it needed support! 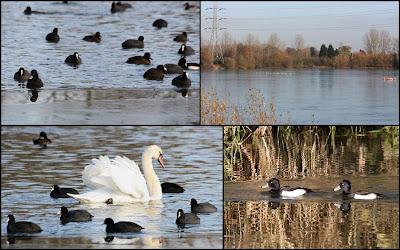 The single area of unfrozen water was a great deal smaller than on my previous visit last week and contained a concentration of Coot, Mute Swan, Little Grebe (1), Great Crested Grebe (1), Gadwall, Mallard, Tufted Ducks, Pochard (18 males), Wigeon (1m and 1f) with Moorhen hiding beneath the overhanging vegetation. The majority of the gulls perched on the ice were Black-headed with a couple of Common Gulls and a Lesser Black-backed. 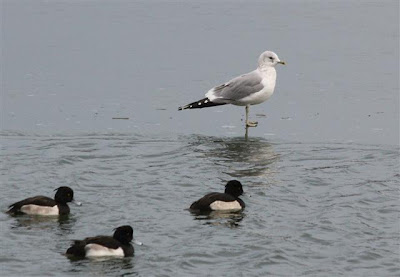 Tufties and a Common Gull.
The small pit was still totally frozen and the only new sighting added as we crossed through the farmland was a Common Snipe disturbed from its resting place.  Alongside the River Wey Navigation we searched the tree tops and eventually found Siskins feeding. Nuthatch, Goldcrest, Dunnock, Robin, Long-tailed Tits, Pied Wagtail, Lapwing and Canada Geese were also spotted. We had hoped to find the Goosanders but with the pits frozen and probable disturbance by walkers along the open waterway I guess they had relocated somewhere else. While following the Wey Navigation back towards the car park a male Stonechat was perched like a sentry on the remains of a tall thistle and unusually there were 5 Tufties on the waterway. Meadow Pipit was heard flying overhead but never sighted. 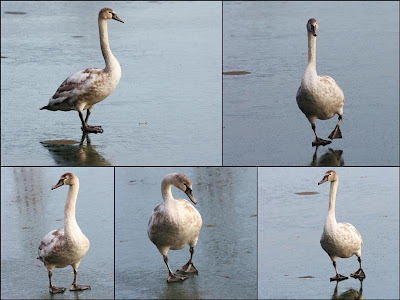 After the walk I returned to the main pit to take a few snaps of the ice walkers - Mute Swan and Mallard. The Swan gingerly placed each foot carefully on the ice as it creaked and groaned beneath its weight. I also located a vibrant blue Kingfisher perched above the water but it .flew off before I could point the lens through the branches. 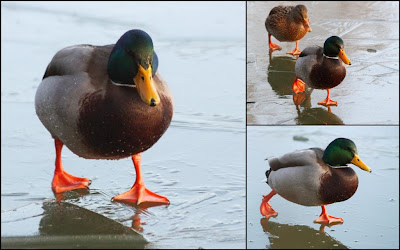 Mr. Mallard had to put the brakes on every now and again to prevent himself from sliding!
An excellent morning walk in good company with a decent tally of species seen.   FAB.
Posted by FAB at 23:44