On Wednesday, after hibernating indoors for a few days, I drove over to Papercourt Gravel Pit to see what might be around. An initial scan from the footpath indicated that 75% of the water was frozen and the wildlife was split up between two areas of unfrozen water. The closest area, at the top end of the pit, appeared to be just black dots (e.g. Coots) but well wrapped up against the cold I headed off to get a closer look. On the way I passed Blue, Great and Long-tailed Tits flitting through the waterside trees together with four very flighty Lesser Redpolls .... good start I thought to myself. 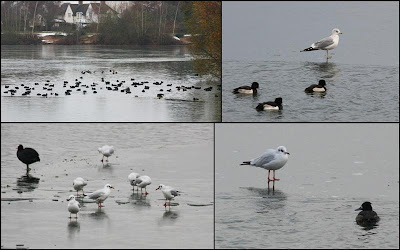 Amongst the numerous Coots I found Tufted Ducks, Mallard, Pochard (all males), one Teal, Little and Great Crested Grebe plus the usual Black-headed Gulls slipping and sliding on the ice. 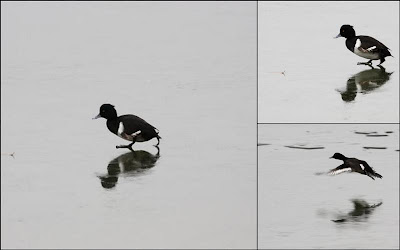 It was also fun to watch this male Tuftie attempting to cross the ice but he eventually gave up and decided it was easier to fly! While scanning the other area of unfrozen water I picked out five Goosander and pondered whether they might ever come closer to the bank for some photos. Always the optimist  I decided to continue around the pit but in all honesty didn't hold out much hope. 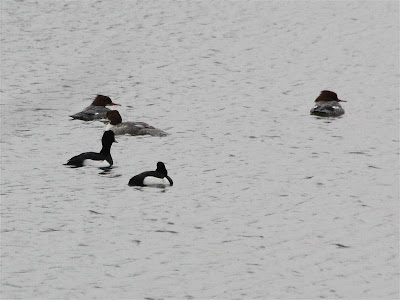 Well the direction of the chilling breeze was not in my favour and they all decided to stay well away from the bank so only a distant (cropped) record shot was available. 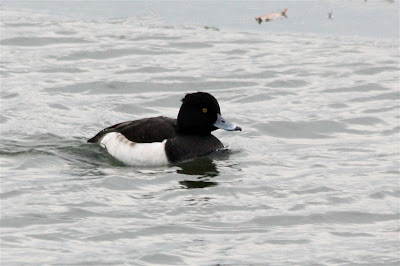 I was however able to get a liitle closer to the Tufted Ducks as they swan passed my position high on the bank above the water. 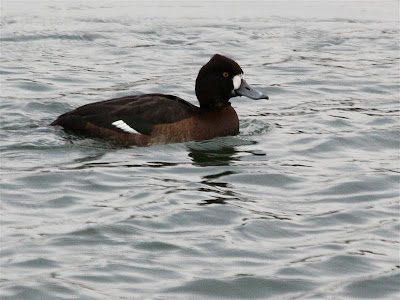 Amongst the Tufties was this female sporting white facial patches and a noticeable peak on the crown (rather than a tuft) so I guess this could be possibly be a hybrid. Female hybrids are notoriously difficult to identify so I am not going to place a bet on this one ... but any of my readers are welcome to make a suggestion! 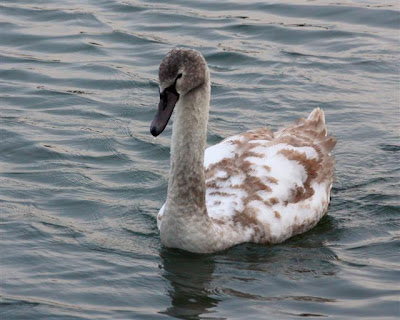 The only other confiding species was this young Mute Swan who queitly drifted past me. Other species seen included Common Gull, Cormorants perched on the overhead electric pylons, Blackbird, Robin, Grey Heron, Goldfinch and a Green Woodpecker.

As it was only mid afternoon, on the way home I stopped off at Bookham Common where there have been recent sightings of Hawfinch but needless to say I didn't find one on this occasion. 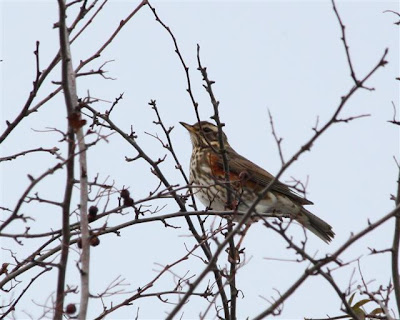 Just after I arrived a Redwing obligingly perched in a nearby tree providing a relatively easy shot whilst trying to hold the gear still with freezing fingers. A brief stroll, scanning all the berry bushes only produced more Redwing (20+), Fieldfare, Song Thrush, many Blackbirds, Greenfinch, Goldfinch, Robin, Carrion Crows, Magpies, Green Woodpecker, a male Pheasant and one male Bullfinch. 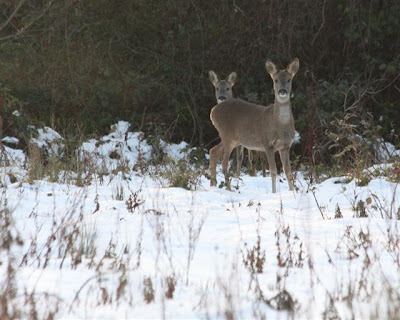 I also disturbed a pair of very young Roe Deer as my feet crunched across the frozen snow .... they turned to give me a fleeting and inquiring look before disappearing into the undergrowth. Today was a better day for the camera but it may take me some while to sort through the options for the next post........FAB.
Posted by FAB at 23:41