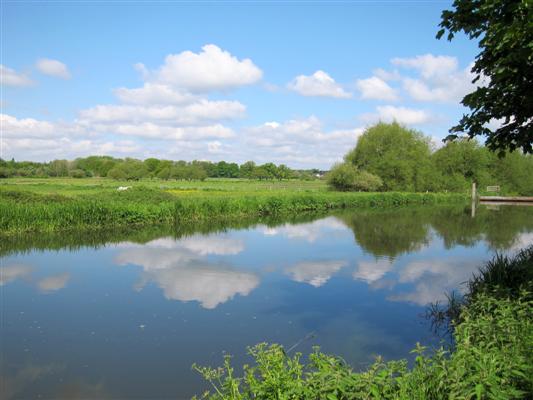 A mid morning stroll at Riverside Country Park on another very breezy day started with a scan across the water meadows but apart from Grey Herons, Canada and Egyptian Geese feeding in the distance there appeared to be very little other avian activity apart from a Grey Wagtail calling on the other side of the weir. 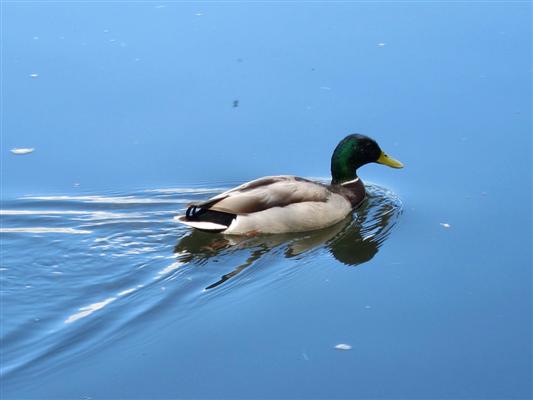 A male Mallard emerged from the waterside vegetation and decided to swim away! 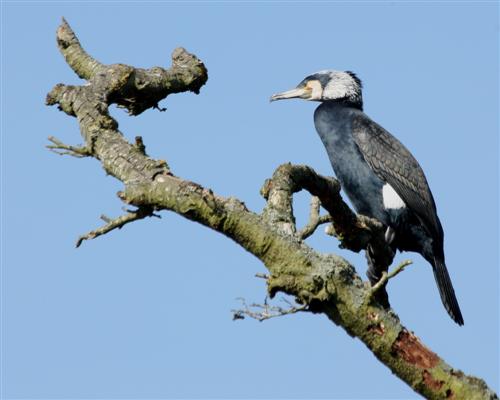 A little further along the towpath a Cormorant rested high above the water. I then took the pathway towards the main lake and noted that a pair of Common Terns had recently returned to the raft and will hopefully breed unmolested by the Canada Geese. A Reed Warbler was perched deep within a willow, constantly emitting its rhythmic song with nearby Blackcap, Wren and Chiffchaff also calling from their hiding places. 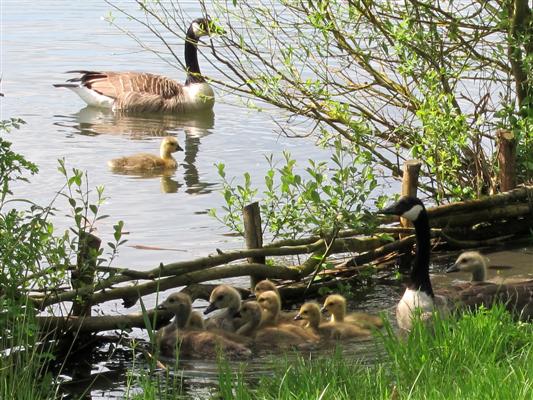 Two families of Canada Geese had obviously been out of the water, feeding alongside the path, but the bank-side low retaining fence was a barrier to their route back onto the lake. Fortunately one of the adults realised that there was a gap (out of view in this picture) and they all eventually made it to the other side. 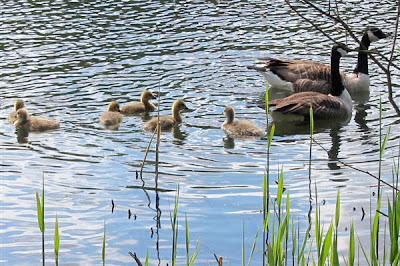 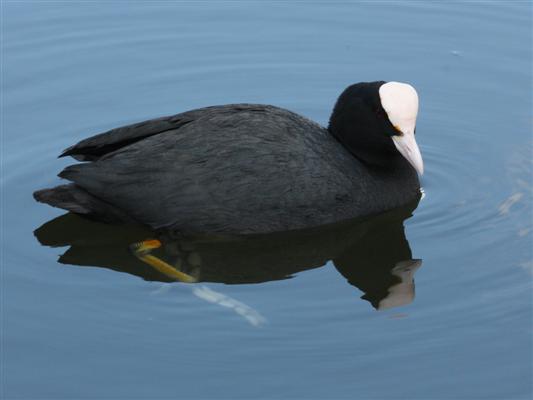 A nearby Coot also watched all the antics but was obviously unimpressed.

The next part of my route took me away from the lake across the adjoining wet marsh onto the new boardwalk which was erected over the winter months by the local Council. I am told that the original estimate was £60 - £80,000 but actually the final cost was three times this figure! A number of local residents and wildlife watchers that I met questioned the validity of the eventual cost and whether it needed to be so elaborate ..... only time will tell. 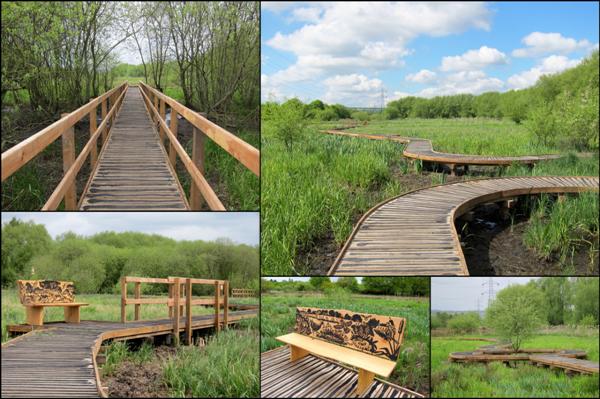 It has taken just over three years for the old 'simple' boardwalk to be replaced and now includes a number of seating areas and a viewing screen overlooking a small pool within the damp wooded area. 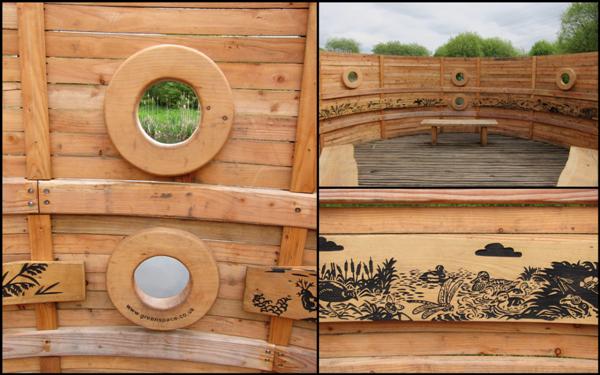 Whilst this hide or viewing screen has been expertly constructed with seating and murals depicting the local wildlife ... the portholes, from my point of view, are not very friendly, being far too small and provide a very restricted view. Having said this on the three occasions I have visited recently there hasn't been any wildlife to watch on the other side of this barrier! 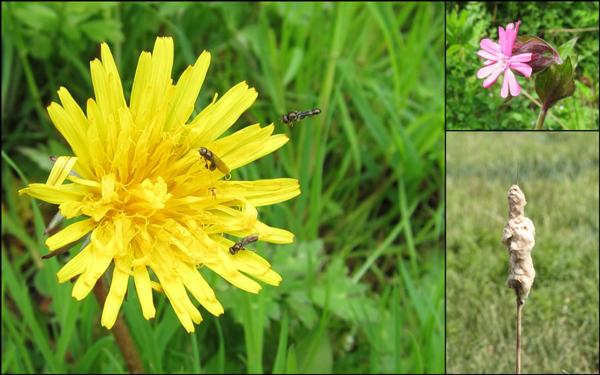 I have mentioned this before in recent post but one certain reason for the apparent lack of avian activity is, in my opinion, down to the lack of insects due to the lower temperatures. 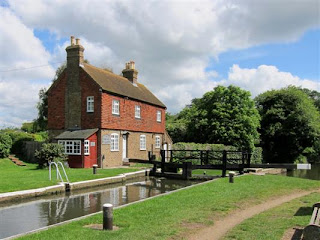 My footsteps onwards across the snaking boardwalk eventually led me to the Wey Navigation Lock where I sat in front of the house watching a female Blackcap and Chaffinch imitating a flycatcher's method of catching  flies over the water surface with a few Swifts circling overhead. Below the lock and close to the water outflow I spotted a couple of juvenile Grey Wagtails patiently waiting for the parents to bring them food. They were well hidden by the leafy overhanging branches so I waited hoping that an adult might appear and eventually one stopped reasonably close by. 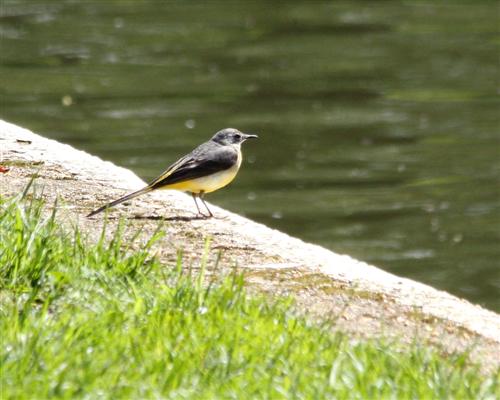 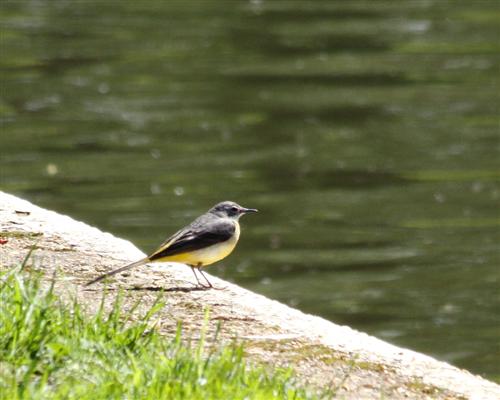 As I had been out for over two hours and a visitor was expected it was time to head for home via the towpath serenaded by numerous Blackcaps singing from their hidden perches. FAB.

Linking to WILD BIRD WEDNESDAY.
Posted by FAB at 11:19