During my very recent wander around Thursley Common I came across a couple of tiny green 'flutters' dancing around the fringes of a young Birch sapling in the middle of one of the sandy tracks. My first thought was to carry on walking as they obviously weren't in the mood to settle BUT then I thought well it might pay to just wait and see .... 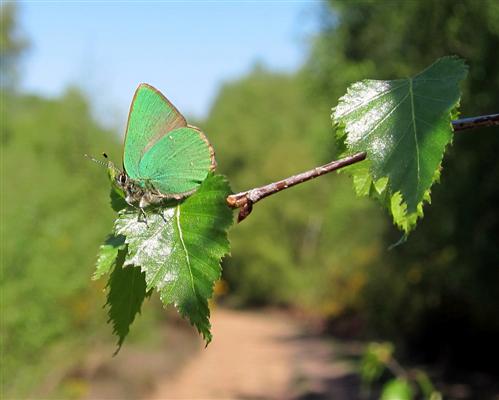 .... and eventually one decided to take a rest. From memory this is probably the closest view I have had of a Green Hairstreak (Callophrys rubi). This is the only British species that is truly green in colour and although it is the commonest of the hairstreaks, when at rest it is often so well camouflaged against the green foliage that many go unnoticed. The male and female are very similar and very difficult to tell apart as the brown upper-sides of their wings (the male has a pale sex brand on each forewing) are rarely seen as this butterfly always immediately settles with its wings closed. On this individual the row of white spots, known as 'hairstreaks' on the under-wing is somewhat reduced and can be completely absent. 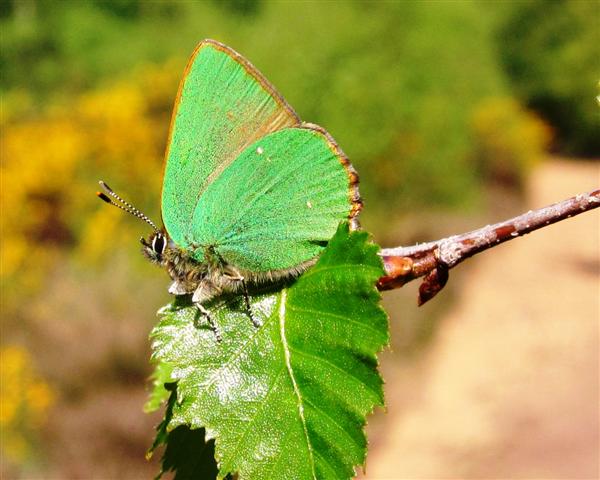 I am guessing that this individual was a male, guarding his territory, and very occasionally darting away to chase off another male before returning to his favorite perch.  All images were taken with my pocket Canon Powershot. FAB.
Posted by FAB at 23:45