As a continuation to 'Geese Galore', which focused on the over-wintering migrant geese that take up residence in Langstone Harbour, this post will highlight just a few of the 53 species logged during last Sunday's visit to Farlington Marshes.

When I arrived at 9 am after a 56 mile drive the high tide was on the turn but there were still small groups of Brent Geese on the water.


Whilst most of the waders, including Redshank, Black-tailed Godwit, Curlew, Avocet, Turnstone, Dunlin, Oystercatcher and Grey Plover were feeding way out in the harbour on the slowly expanding areas of mud I did manage to locate a lonesome (Common) Redshank close by the sea-wall. 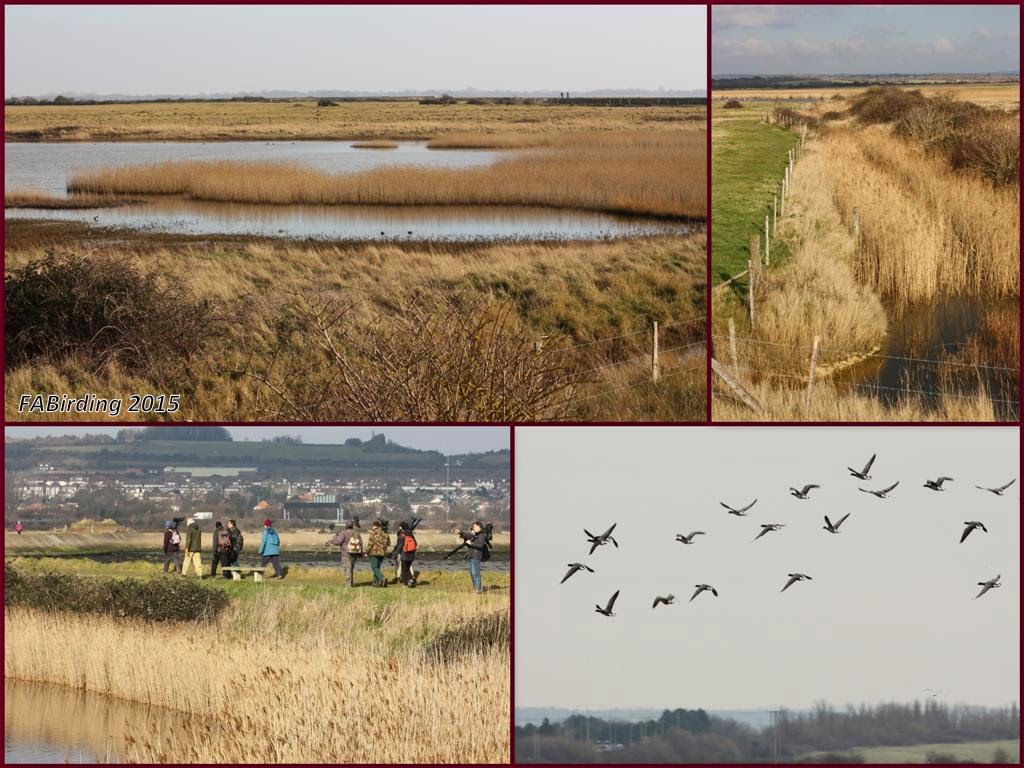 Once the party of a dozen birders from the Surrey Bird Club were assembled we commenced our anti-clockwise circuit of the 153 hectares of Farlington Marshes by following the track around the seawall.

After scanning the harbour and adding Mallard, Shelduck, Wigeon, Teal, Shoveler, Pintail, Little Egret and the usual Gull species our attention turned to the nearby pool.


With typically high water levels at this time of year there weren't many waders present, just a few Godwit and Dunlin but we added Grey Heron, Little Grebe, Coot, Moorhen, Gadwall and one of my favourite winter ducks the Northern Pintail with the males sporting their elegant breeding plumage. I also located a Snipe hiding in the grass, bobbing slightly as it moved, but it turned out to be just the common variety!


I have previously mentioned that this site is internationally important as it plays host to particularly large populations of the Dark-bellied Brent Goose, Black-tailed Godwit and Dunlin.

Some of the Icelandic Black-tailed Godwits can be seen wearing coloured rings in various combinations on the tibia  (above the ‘knee’ joint) and the tarsus (below the ‘knee’ joint), and each scheme has one ring of a particular colour in a constant position. The Farlington Ringing Group plays an important role in this and you can find out more about the coding and schemes here.

As you can see it can be difficult to clearly identify all the rings on some individuals especially when they are walking in the water but every sighting record submitted helps to build up a picture of each bird's location history. One of our group diligently documented our combined sightings.

During a visit here in January 2009 I digiscoped my first colour ringed BTG and you can see the images and some of its life its history in a previous post entitled 'Godwit Sighting History'.


One of a handful of Little Egrets seen searching for a meal during our walk. Amazing to recall that any sighting 26 years ago was considered a rare event.


After one full circuit my colleagues walked back to their vehicles for lunch but I decided to spend some time wandering along the stream to capture some flight shots and while scanning the extensive adjacent reed bed two Bearded Reedlings zipped in and out of view and a Cetti's Warbler called from a nearby shrub.
I also obtained a few shots of Gulls and Shelduck flying to and from the harbour.

Every now and then the flock of Lapwings took flight, probably disturbed by over-flying noisy helicopters, and so distinctive with their two tone wing pattern, shape and shrill 'pwaay-eech' call. 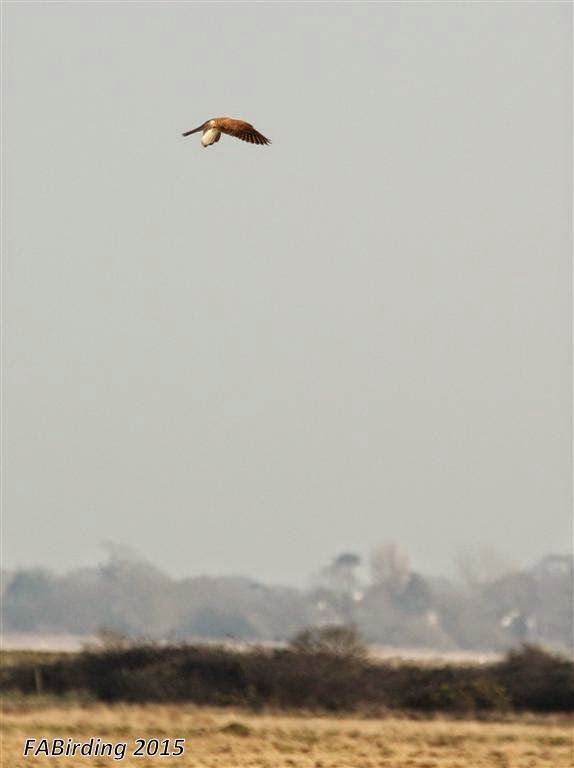 Very surprisingly the only raptor I spotted was a hovering Kestrel.

Further round the circuit a small flock of Linnets passed overhead. Skylarks were heard and then two seen chasing one another. Stonechats popped into view at several spots.

The grazing marsh was, of course, littered with hundreds of Brent Geese (up to 4,000 recently recorded on site), 28 Barnacle Geese, and numerous Shelduck plus a few Tufted Ducks amoungst all the other duck species already logged.

After some six hours of glorious coastal birding under a chilly winter sun I had added a dozen species to my year list to take the total to 101. So with final views of the Barnacle and Brent Geese in flight it was time to wend my weary way home.  FAB.