Following up on a post last August entitled 'A New Transect for 2015' I am pleased to say that my offer to carry out a new butterfly recording transect on Ashtead Common National Nature Reserve, managed by the City of London Corporation, has now been confirmed. This involves a weekly stroll over a fixed route from April to September, a total of 26 weeks, in suitable weather between 10.45 and 15.45 to record the variety and numbers of species seen throughout each of the 8 dedicated sections.

Whilst I have carried out three surveys so far the weather hasn't been particularly brilliant with gusty winds on most days between 8-20 mph combined with temperatures barely acceptable for the flutters so it is perhaps not surprising that I have only recorded 7 species; Brimstone (6), Large White (3), Small White (3), Green-veined White (1), Orange Tip (6), Peacock (2) and Speckled Wood (6).

Throughout the 500 acres (200 hectares) of Ashtead Common there are over 2,300 ancient oak pollards, many over 400 years old, which play host to a surprising variety of wildlife. Continual management is required to maintain the health of these veteran Oaks by reducing their crowns, clearing away the understory growth and where appropriate allowing younger trees to thrive so they can eventually take over from their forefathers. 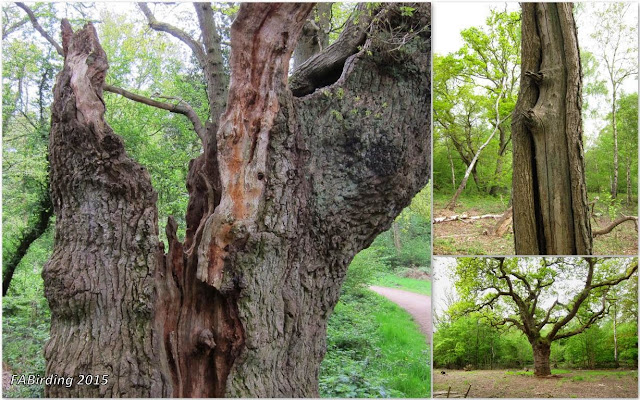 In the open wooded pasture glades many old trees remain standing, weathered by the passage of time with shattered and torn limbs but continuing to play their part in the landscape as hideaways for numerous tiny creatures and nesting cavities for the birds and mammals. 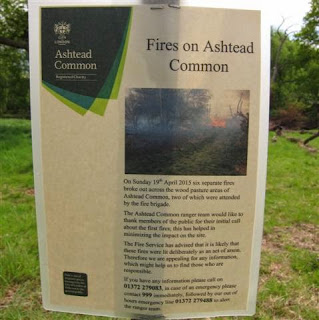 During my most recent survey I noticed this sign stating that three weeks ago there had been six fires within the wooded pasture areas on the common all thought to have been deliberately lit. Fortunately through prompt action of the public and the Fire Brigade the overall damage was minimised.


I had previously seen evidence of a similar situation on my nearby birding patch at Epsom Common and have to wonder at the mentality of the idiots that  think this behaviour is acceptable.


Throughout the transect there are numerous patches of our native Bluebells and as soon as more wild flowers come into flower I'm sure other species of butterfly will be seen. One very majestic veteran that I walk pass is the King Oak which at the moment is still to come into leaf.

One species I was hoping to record along the transect is the Holly Blue but although I eventually found one resting it was seen elsewhere and therefore hasn't yet figured in the statistics.

Linking to Saturday's Critters hosted by Eileen.
Posted by FAB at 20:56