As my regular readers will already know the "Early Birder" is partial to a stroll before going to work. Well this week was no exception, so on Thursday morning with approx one hour at my disposal I stopped off at Bookham Common. Weather conditions were not brilliant with a heavy overcast sky and a strong breeze. I headed uphill into Hill House Wood (deciduous woodland dominated by old Oaks) initially in total silence until I heard the croaking 'kah-ahrk' calls of two Grey Herons sailing high over the tree canopy probably on their way back to the heronry. Next a Blackbird scuttled under cover as it heard my footsteps and a Wren uttered it's explosive call from deep in cover nearby. At the top of the hill I headed towards one of the many open glades and heard the sharp 'kick-kick' call of a Great Spotted Woodpecker and then the very forceful and repeated 'chuitt - chuitt' sound of a Nuthatch high above me. As I approached the edge of the clearing two female Blackcaps were searching for an early snack but quickly disappeared deep into the wood. Young Blue Tits and Great Tits were also feeding within the foliage and I caught a brief glimpse of a Goldcrest as it darted from branch to branch. 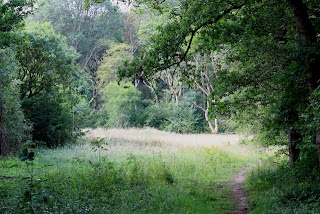 As I entered the glade a fluttering shape caught my eye; I watched patiently and eventually it perched close to the path; a female Silver-washed Fritillary. Over the next ten minutes or so several more females appeared and I wasn't sure where to look next! 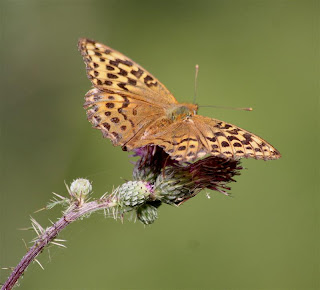 Moments later I spotted a much brighter individual....a male at last would be be captured by the camera. Time seemed to stand still as even more males glided down from the treetops all around the clearing.
[This spectacular fritillary is generally quite common in large broadleaved woodlands in southern England. A single brood flies from mid June until early September with peak numbers at the end of July. The males have four bold sex brands along the veins of the forewing. Eggs are laid singly in a crevice on the trunk of an oak, usually one to two metres up. The caterpillar feeds on Common Dog-violets and the chrysalis resembles a withered leaf.] 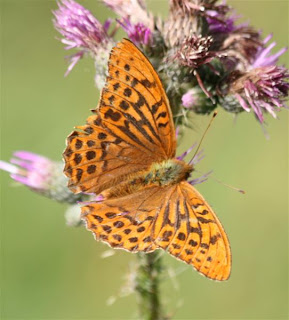 My attention was then distracted by the unmistakable 'mewing' calls of Common Buzzard. A few moments later a pair appeared over the clearing, wheeling around above me and I just managed a few quick shots before they disappeared just as quickly as they had arrived. 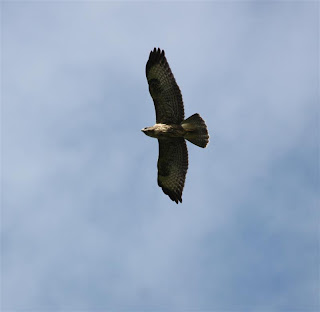 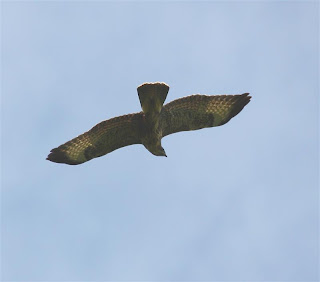 The next flutters to appear were a White Admiral and ....... 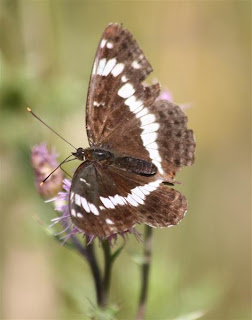 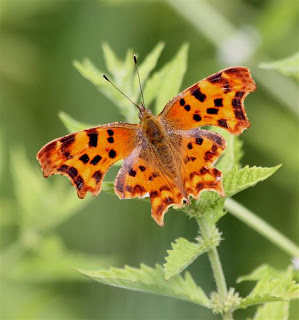 Checking my watch I realised that I had been enthralled by these 'flutters' for over 30 minutes and it was time to head back to the car. (If only I didn't have to go to work!) 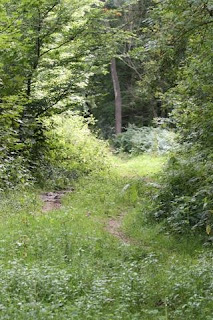 The quietness was disrupted by the 'yaffle' of a Green Woodpecker as it's torpedo shape crossed the clearing. My return walk was interrupted again by the sight of two more 'flutters' - first a Gatekeeper perched on a nettle ........ 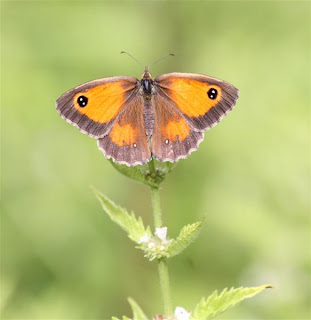 and then a Large Skipper posed for it's portrait. 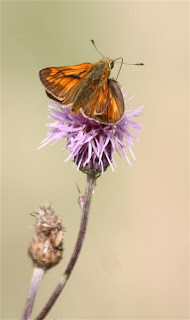 Well I could never have guessed what this morning walk would turn up but it is 'magical moments' like this that make my heart sing.