On Sunday I drove southwards to lead a Surrey Bird Club field trip at Farlington Marshes.

The weather forecast was not promising with heavy rain predicted for most of the morning but fortunately this failed to materialize with any significance. Under an overcast sky and light drizzle just two members, Trevor and Victoria, joined me at 9am for the planned walk around the reserve. 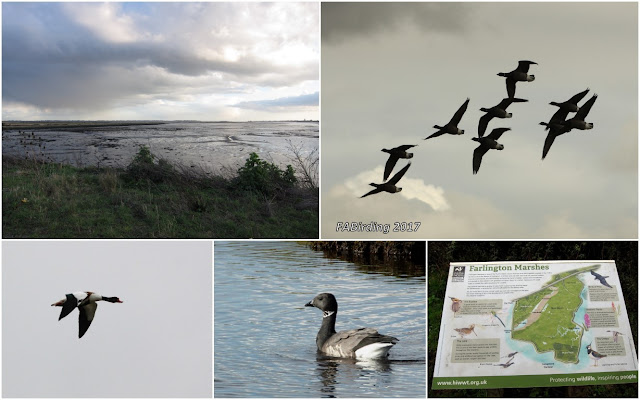 High tide was due at around 11.30 so we started by scanning the extensive mudflats locating numerous Dark-bellied Brent Geese plus good numbers of Shelduck that traditionally overwinter around Langstone Harbour. Small groups of Northern Pintail with the elegant males in their full finery were spotted together with a few waders; Dunlin, Grey Plover, Redshank, Black-tailed Godwit, Oystercatcher and Curlew. 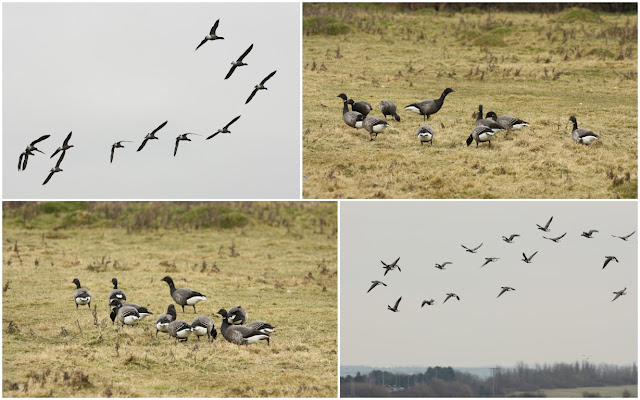 As the tide rises the Brent Geese leave the harbour to fly into the grazing marsh.


Heading inland towards the stream the first of several Cetti’s Warblers boldly called from the nearby vegetation, typically moving ahead of us out of sight! Amongst a small group of gulls we found two Mediterranean Gulls enabling a clear comparison with their Black-headed companions. A few Lapwing briefly appeared in the sky above the reed bed. Due to the damp conditions, not surprisingly, we failed to see any Bearded Reedlings near the information building where we sheltered briefly from the constant drizzle. At this point Victoria unfortunately decided it was time to return home.

The sun eventually tried to make an appearance and the drizzle finally abated so under a lightening sky and hopeful for an interesting afternoon Trevor and I walked out to rejoin the sea wall path. 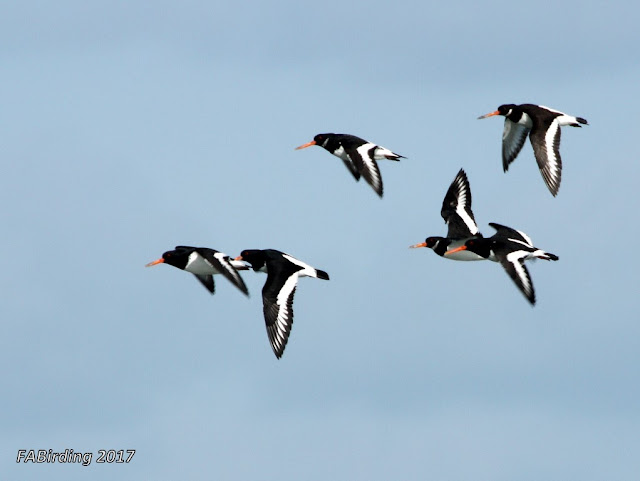 Oystercatchers flying across the harbour. This image was taken just a week earlier under better lighting conditions.


With flat calm waters on the falling tide we finally spotted a small flotilla of Red-breasted Merganser, a single female Goldeneye and Great Crested Grebe. An LBJ flitting through the field edge shrubbery was eventually identified as a Chiffchaff. Walking towards The Deeps we added Wigeon, Shoveler plus a distant perched Kestrel eating its prey. 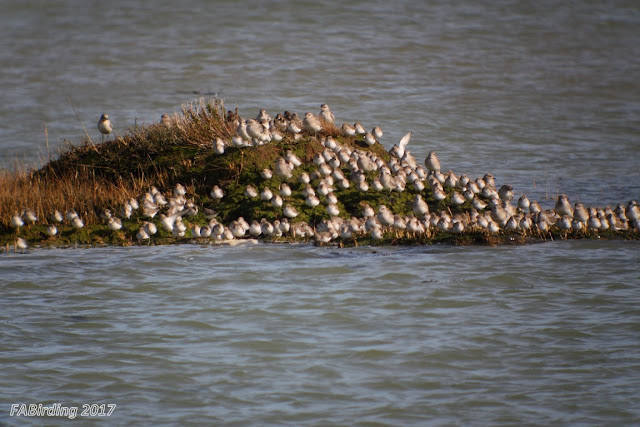 
At the Deeps, a winnowing Little Grebe failed to make an appearance but a pair of Reed Buntings and Tufted Duck were added to our day list. Several more Skylarks were seen and heard. Having earlier heard a Meadow Pipit calling in flight we located 2 Rock Pipits feeding in and out of the grass margins on the sea wall path.

At around 1.30pm while watching various flocks of waders moving out across the harbour I turned around only to find a Short-eared Owl hunting over the Point and then disappearing out of view. We retraced our steps and relocated this individual sitting on a fence post before it eventually flew of east towards North Binness Island. 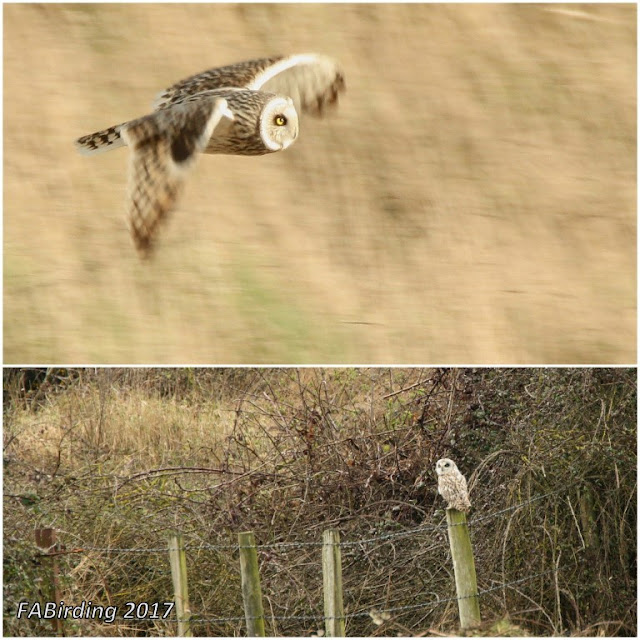 Chatting to another birder helped us to get scoped views of a preening Spoonbill at the back of the distant reed bed. A definite rarity for this site and an excellent addition to the trip list. Shamefully I had previously spotted and discounted an unmoving white blob well-hidden way out in the grass as probably a plastic bag!!

Moving further around the Point and thinking that having seen one ‘Shortie’ was a bonus we were delighted to have even closer views of a second bird who after briefly flying around perched on a grassy mound allowing for another photo opportunity. 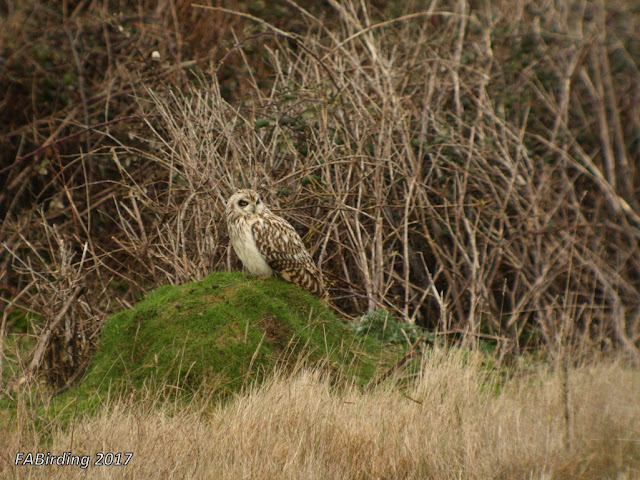 Returning full circle back to the main pool we enjoyed close views of a feeding Little Egret and Common Snipe and logged 5 Greenshank and a single Spotted Redshank in its typical grey winter garb. 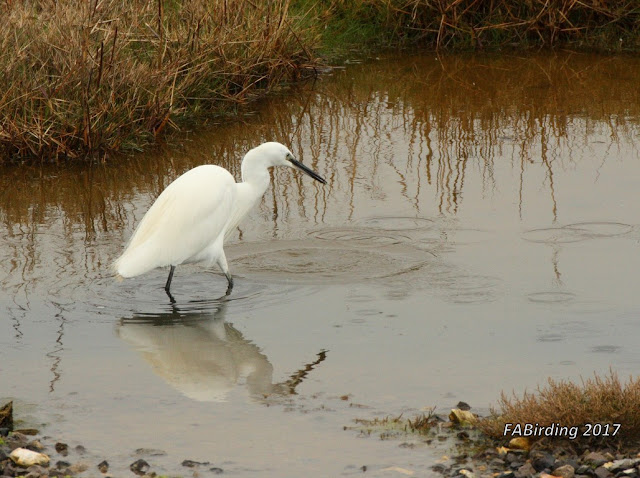 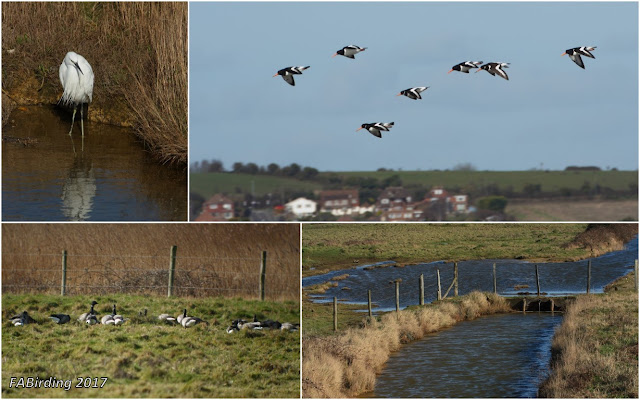 My thanks to Victoria and Trevor for their company and making this a worthwhile trip to the coast with a final tally of 60 species. FAB.