A couple of days ago I visited Thursley Common again but this time the conditions were far more promising .... muggy and slightly overcast with hardly a breeze so I headed out onto the acid heathland in the hope of finding something to photograph. Initially things were fairly quiet with just a brief sighting of a female Keeled Skimmer plus Brown Hawker and an Emperor busily patrolling their territories. As the sun broke through around midday the activity intensified with Skimmers and Darters zipping about erratically in every direction. I eventually located a pair of Black Darters (Sympetrum danae) flying in tandem who decided to perch very low down above the board walk allowing a reasonably close encounter. 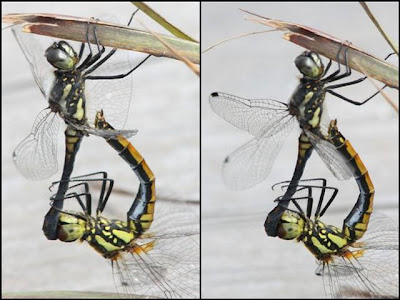 There was a certain amount of wing fluttering by the male as this pair struggled to maintain their composure. 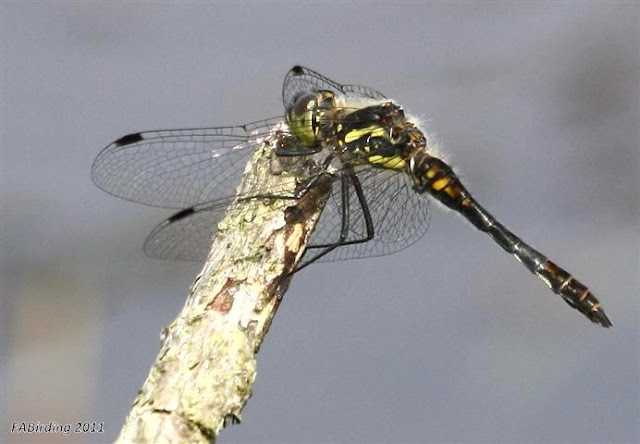 Mature males are non-territorial and frequently settle on marginal vegetation to bask in the sun which provides a good opportunity to view its very distinctive colour markings including the three yellow spots enclosed within a median black patch on the side of the thorax. The black markings have a thermo-regulatory function so it adjusts its body heat by both perching at different heights and to reduce the surface area exposed in very warm conditions it will point its abdomen vertically towards the sun ... known as the obelisk position ... on this occasion it wasn't quite warm enough for that particular pose. 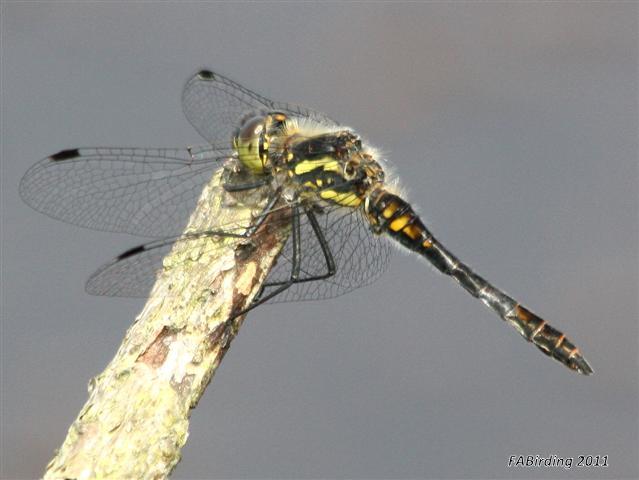 This is a northern species with a circumboreal distribution and fairly widespread throughout much of the UK although far more abundant in the north as it requires shallow, acid, nutrient-poor pools on heathland, moorland and bogs.   FAB.
Posted by FAB at 23:47